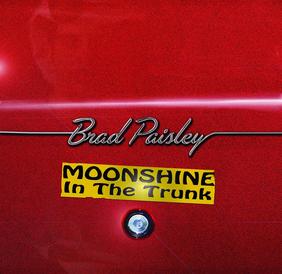 Following up 2013’s ‘Wheelhouse’ was always going to be a mammoth task for Brad Paisley so there was a real anticipation in the build up to ‘Moonshine in the Trunk’. In his usual way Brad made sure the weeks prior to release were full of teasers on Twitter and Instagram ranging from Carrie Underwood crushing a can to emails from his record company begging him to stop leaking tracks. After the build up to Wheelhouse being marred by the storm surrounding the leaking of ‘Accidental Racist’ Brad seemed to want to take matters into his own hands and "Leak Moonshine".

The sound of the cracking open of a can leads us in to opening track ‘Crushin’ it’. This fun tune is a sing-a-long number about a guy who is never going to achieve much in life but knows how to have a good time. It even includes a fitting tribute to the recently retired George Strait ‘like the great George freakin’ Strait I’m the king of getting unwound’. It’s a typically country song about drinking beers and having a good time.

In the second song of the album Brad takes the beer drinking down to the ‘Riverbank’. Full of his typical wit and musicianship this song is another upbeat and fun summer song. One complaint I often have about country music these days is that there are far too many songs about ‘drinking beer on a Friday night’ however the great thing about Paisleys music is that he injects more than enough humour, wit and intelligence to each song that gives it more than enough depth.

‘Perfect Storm’ leads us into more of a straight up love song territory. Again, Paisley uses his amazing skill set to make the song so much more than the usual country love song. With it’s catchy chorus and great lyrics (try ‘if she was a drink she’d be double barrel bourbon on ice, smooth with a kick, a chill and a burn all at the same time’) this song has become a firm favourite.

Up next is a shining example of just how good Brad Paisley’s song writing can be in the form of ‘High Life’. Featuring the awesome vocals of Carrie Underwood; this song is the tale of a family who makes their money from inheriting from the dead and suing the living. There are so many examples of great lines in this song but my favourite has to be just before Carrie Underwood comes in ‘I heard a song a couple of months a go, Carrie Underwood on the radio, reminded me a poem my brother wrote, back in second grade, I know she didn’t steal it but so what? We lawyered up and sued her butt’. Mixing comedy with seriously good music is no mean feat but Paisley manages it here with aplomb.

The title track ‘Moonshine in the Trunk’ is without doubt my favourite on the album. It kicks in with an upbeat riff and just takes off from there. This is the kind of song I’d love to hear live as it really would get any crowd jumping. With it's uptempo beat and slightly rocky edge I’d imagine it won’t appeal to every Brad Paisley fan but that’s what he is all about; making music that appeals to every type of country fan.

‘Shattered Glass’ takes the tempo down again. This was a song which was rather aptly debuted by Ellen Degeneres as part of the Leaking Moonshine project. It’s a beautiful song about the changing attitudes in the world which have allowed women to achieve anything they want and break the glass ceilings holding them back. There is a hint of cheesiness perhaps to the song however the fact that Paisley sings it from the point of view of a proud father does help to make it a bit more wholesome.

Just in case you were missing the songs about drinking ‘Limes’ pops up next as an ode to making margaritas when life gives you limes. It’s very easy to write a song about drinking and turn it into something stereotypical and bland but again Brad manages to steer away from this by keeping things upbeat and offering advice those those feeling a bit down on their luck ‘You take it all with a grain of salt, and realise sometimes it ain’t your fault, you got something you don’t wanna remember, that’s when you need to just throw it in a blender, and a have a good time’ is the upbeat chorus which I’m sure will inspire many tequila fuelled sing-alongs.‘

You shouldn’t have to’ follows and admittedly is the only song on the album which just doesn’t work for me. It continues on the feminist theme (which I should point out I have no problem with!) but just comes off as a little contrived for my ears.‘4WP’, ‘Cover Girl’ and ‘Gone Green’ are again witty numbers which fit nicely on the album. The upbeat nature of the songs keeps the mood positive and the cameo from Brad Paisley on his own album with an excerpt from ‘Mud on the tires’ is a humorous nod over his own shoulder.

‘JFK 1962’ is an excerpt from a John F. Kennedy speech about man reaching the moon for the first time, it leads into ‘American Flag on the Moon’ which is another upbeat and motivating song about achieving whatever you want and daring to dream; a real recurring theme on this album. Even as the cynic I am I cant help but feel a little inspired by the lines ‘Tonight I dare you to dream, Go on, believe impossible things’. The song closes out with a children’s choir singing the refrain. This song is just Brad Paisley doing what he does best.

‘Country Nation’ is a celebration of the country lifestyle and country music. This is another upbeat and stirring number to round things off on the album and brings to a close a set of songs which really show what a good place Brad Paisley is in at the moment with his music.

A cover of George Jones’ ‘Me and Jesus’ is included as a bonus track. Paisley himself has declared it a tribute to the Ebola stricken Dr Kent Brantly who was recently returned to the USA from Liberia. I’m not sure whether it was intentional or not but it also serves as a fitting tribute to the late country legend who so sadly passed away last year.

Overall
This album more than matches up to it’s predecessor ‘Wheelhouse’ and perhaps even exceeds in some quarters. Whilst I enjoyed the variety of styles and the experimentation on ‘Wheelhouse’ it did not necessarily go down well with all fans; ‘Moonshine in the Trunk’ is back to the upbeat, country sound that people have loved so much on previous Brad Paisley albums.On a personal note I would have enjoyed more of a display of Paisleys dazzling guitar skills but I know that’s not to everyone’s taste and the man himself probably wanted a step back after years of guitar slinging. There are clearly a few themes which are revisited throughout the album but as far as I’m concerned the songs themselves are so well crafted that it doesn’t become tedious for the most part.