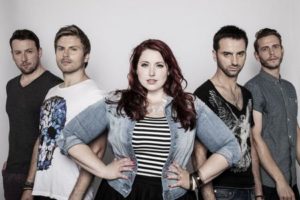 When Jessica Clemmons, the ‘Jess’ in Jess & The Bandits, first started her career she was a pop star supporting The Overtones. Having met some likeminded musicians she got together a country act and headed  to Country 2 Country last year where they received a great reception and gained many fans. This week has seen the release of their latest single ‘You Can’t Stop Me’ and we were lucky enough to have a chat with Jess about all things country.

Jess, you’re from Texas one of the homes of country, how did you end up in England playing country music?

Well it didn’t start out that I was playing country music until just recently. Previously I recorded two pop albums and decided it was time to get back to my roots and write and perform the music that I always knew made me feel at home. Because I already had a fan base in the UK, it made sense to continue there.

When did you first get involved in playing and writing music?

I wrote my first song when I was about 10 and performed everywhere from church to local theaters to competitions. After graduating from high school I really started to actively pursue music and songwriting professionally

How did you meet the Bandits?

It was actually when I was opening for the The Overtones in the Autumn of 2012. They were playing for the guys and by the second day into the tour in Ireland, we instantly bonded. Over time we realized how much we all love country music so it was natural that we started playing together.

You toured with The Overtones and Boyzone, a far cry from country music, how did end up playing with those acts?

I have a great management team and the got in touch with their people. Fortunately The Overtones and Boyzone loved my music and invited me/us on tour with them. The great thing is, playing with acts that aren’t necessarily country music, there is a great opportunity to introduce people to a new genre that they probably didn’t realize the like.

What are the influences that help shape the sound of the band?

I think we all have different influences from people like Johnny Cash to Dolly Parton but at the end of the day we just want to put out great music that people will love and those influences can be drawn from just about every genre of music.

Do you draw a lot from your experiences in Texas when writing country music?

Sometimes. We have a song called ‘Single Tonight’ that is a proper Texas country style. We have our own genre of country here in the State of Texas that I knew needed to be incorporated. Mostly my inspiration comes from anywhere and everywhere. It can be personal experiences or something I see others go through.

We read that you spent some time in Nashville in order to write the album, did you do this just to surround yourself with country music or was it to write with others?

Last year you played Country 2 Country festival in London, what was the reaction you got like?

That was so much fun! It was actually really interesting for me to see so many country music fans in London. The reaction was incredible to us and I think it really helped build the fan base.

Country 2 Country seems to be the place where many rising stars have taken their first big steps, how useful a tool is it to generate interest and a larger fan base?

I think anywhere you can go that will get you in front of your target audience is a smart thing to do. Having a load of country fans all in one place for a whole weekend ensures that you will leave gaining new fans and introducing your music to people who may not have heard of you prior.

You’re based in London. Do you feel the country music scene is growing not only there but in the UK in general?

Oh absolutely. I have watched it grow in such a short amount of time, it’s fantastic. It’s great seeing the music that I grew up with and have always loved become so popular all over the UK.

Do you find inspiration in the success that the likes of The Shires are currently experiencing?

I love seeing country artists on radio play lists. I think it’s about time that happened. It gives hope to all of us artists, especially indie artists and bands, that there is a place for us in the UK.

Your latest single ‘You Can’t Stop Me’ has recently been released; soon to be followed by the album in March do you feel like you’re getting a good buzz around them?

Yes! This will be our debut album as a band and the buzz around it had been so pleasantly surprising. We hope to make music that people love and catches on, but when that actually seems to be happening, it makes it all very exciting.

Do you intend to return to America at all or do you see England as your home and the base of the band now?

England is definitely where the band is based but America, especially Texas, will always be my home. I’m fortunate to be able to travel back and forth as often as I need to. Lately it’s been so busy I’ve been racking up the frequent flyer miles!

Yes you sure are! Our schedule is really starting to fill up. We have just announced several dates in March as well as quite a few this summer for festival season. More seem to be coming in by the day so keep an eye on www.jessandthebandits.com for the latest.

What are your plans for the future?
To work really hard this year promoting and performing our new album, along with writing and recording for future projects as well. We are also looking forward to expanding into other territories around Europe as well as Ireland. Hopefully even touring the US also. As long as we’re somewhere playing live, mission accomplished.

The new single is available on iTunes now. Keep an eye out for the band on the road in the coming months.