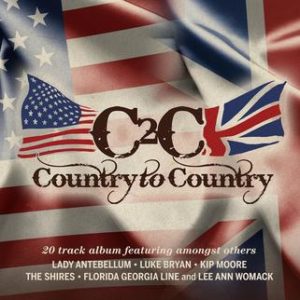 Originally starting in just London the Country 2 Country festival is about to enter it’s third year. Having boasted acts like Brad Paisley, Zac Brown Band, Dierks Bentley, Carrie Underwood and Vince Gill it has certainly shown off the best that country music has to offer. This year an official Country 2 Country CD is being released to celebrate some of the best acts and songs that have blessed the O2 Arena in recent years.

Here at Six Shooter Country we have been lucky enough to receive an advanced copy of the CD courtesy of the great people at Wrasse Records. We’ve run the rule over it to let you know exactly what to expect from the album.

Kicking off with this year’s headliner, Luke Bryan, we have a song that can probably be related to most evenings at the festival ‘I Don’t Want This Night To End’. Followed by tunes from Lady Antebellum, Little Big Town, Darius Rucker and more.

One of the great things about the CD is the fact that it doesn’t just focus on the main stage acts and also features some of the best from the pop-up stages including Ward Thomas, The Shires and Raintown. All British acts who have put on fantastic performances over the years. Perhaps one of the things that has made C2C such a great event is the things going on around the arena and the inclusion of these acts is a great touch.

We could go through the CD song-by-song but most country fans will be more than aware of each of the songs on there. The overall feel of the album is a little mid-tempo and it might have been nice to see some more ‘in your face’ songs and maybe some that have a special relationship with the festival for example Dierks Bentley’s ‘Home’ which had the whole crowd lighting up the arena in 2014 which their mobile phones or Darius Rucker’s ‘Wagon Wheel’ which created a huge sing-a-long in 2013. Other than these points it’s a really great souvenir of the festival and would also act as a great introduction to country music for new fans.

7. Doug Seegers – Going Down To The River

Overall, this CD is well worth a purchase. It’s difficult to review and rate a collection like this when really it is what it is. It’s a playlist of not only some of the best acts who have played the festival but also some of the greatest acts in the world of country music. Hopefully it’ll be the start of an annual release maybe with a live and album and DVD. Now that would be special…