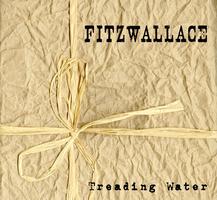 Here at Six Shooter Country we know it’s important to show our support for local bands. As we are based in Leeds, England we’ve formed a great relationship with the guys in up-and-coming country/folk band Fitzwallace. It’s been an exciting year for the band who played last years YeeHaw Festival in the UK and supported The Shires and Ward Thomas. This year they are due to play the pop up stages at Country 2 Country festival and we thought what better way to introduce them to people than taking a look at their 4 song 2014 EP ‘Treading Water’.

The EP kicks off with the breezy ‘We’ll Go On’. This song is about as catchy as it gets and shows off the multitude of influences that Fitzwallace have. The chorus is a sure fire sing-a-long that we dare you not to tap your foot to. It’s a brilliant introduction to the band with its gentle slide guitar playing away in the background and the banjo twanging along. Lead singer Joe Martin keeps things relaxed throughout and doesn’t push his vocals too hard whilst Flo Taylor brings the harmonies. The song really does serve as a statement for the band as they sing ‘I’m gonna be playing some bluegrass on my lawn’. The song sounds like a mix of country, folk and Hawaiian (that took some work to spell) music – a real anthem for the summer.

‘City of Angels’ opens with a sound not unlike the end credits of a Tarantino movie. It has an almost 50’s rockabilly feel too it as the lead guitar dances over a straightforward acoustic progression. The way the song bounces along fits perfectly with the lyrical ‘road trip’ journey that Joe Martin is leading us through. The harmonies provided by the band really flesh out the chorus and, again, credit has to go to her superb vocals for giving the song an extra edge. Joe Martin may not have the most powerful singing style but the way it works with Flo creates a Lady Antebellum or Fleetwood Mac esque feel.

After the jaunty opening numbers ‘Wouldn’t I?’ has a much more stripped back feel. The two vocalists split singing duties equally on this number and creates an almost dreamy love song. The verses are perfect in their sparseness and build to an emotional feeling chorus.

The real highlight of this EP for me is the superb title track ‘Treading Water’. It opens with Joe Martin singing over a soft acoustic guitar and builds into something which could be truly epic live and perhaps with more opportunity for production. The drums push the song further and further into its crescendo and Joe Martin shows what he can really do with his voice. This is the kind of song that you feel would be a sure fire hit if handed to one of Nashville’s big hitters such as Little Big Town or Lady Antebellum. The climax of the song is a real ‘hairs on the back of your neck’ thing.

This is a strong debut from an up and coming British act. The range of influences that the band show make for a fantastic sound and interesting variety. It has to be said that the quality of musicianship is evident – no surprise considering the band are currently studying at Leeds College of Music. Personally, ‘Treading Water’ was one of my favourite songs of 2014. Sometimes it feels like some of the songs could do with a little extra punch but when we are looking at 4 songs it’s difficult to know what else the band have up their sleeves. I can’t wait to see what Fitzwallace do with their upcoming album – hopefully more songs will serve to prove just how much variety this band can offer. Keep an eye out for them and go give this EP a try! It’s available on iTunes now!