This March Jason Aldean plays his first European shows and has made the decision to coincide this with the release of his entire back catalogue in the UK… finally. With the continued rise of country music in Europe this release of Aldean’s back catalogue is another big step forward – artists seem to be realising we are worth the effort. We took a look at his most recent release Old Boots, New Dirt which was released on 23rd February.

The album kicks of with Just Gettin’ Started which is a typical guitar driven Aldean song. Lyrically it could be a stock country song about taking a drive with a girl in a truck this time going to a party. It doesn’t pull up any trees but it’s certainly catchy enough with it’s rolling banjo and wailing guitar over the top.

Show You Off is up next and is another mid-tempo Aldean song – starts loud with a guitar riff then mellows into the verse. This seems to be a typical Aldean thing. Continuing the theme of girls he sings about wanting to show off his girl around Nashville.

Track three is Burnin’ It Down which offers something a little different to the first two tracks and has a little more of an electronic feel. It almost feels like it could have been lifted from Keith Urban’s Fuse album with its electronic sounds and drum beat. All this being said it never really feels like it gets going and is maybe more of a chill out song.

Tryin’ To Love Me shows off perhaps my favourite side of Jason Aldean which is his ability to produce a powerful ballad. The song is an emotional tale of regrets when a relationship falls apart and how over time we release what peoples true intentions really were. It’s classic Aldean.

Sweet Little Somethin’ is an upbeat number with a great toe tapping banjo and guitar intro. It’s another song that has heavy elements of electronic music in it. This is particularly obvious during the verses but the whole song has an electronic beat going through.

Next up is Laid Back, which is another catchy, drinking song. It’s certainly not going to win any awards for originality but with a great guitar solo in their it’s easy listening.

Tonight Looks Good On You brings out the emotional side of Aldean again as he sings about his girl looking good as he takes her out.

In Too Fast we have another mid-tempo song in which Aldean laments about the past and how he could have done things better. Even though it’s something we’ve already seen a couple of times on this album it’s a really catchy sing-along number.

The title of If My Truck Could Talk says it all about this song really. We all know how much these country boys love their trucks and this song is no different. It’s all about how his truck has seen things that nobody should know about. In all honesty I can’t really get on board with the line “If my truck could talk, I’d have to pull out all the wires”.

Title track Old Boots, New Dirt is a real standout on the album. It’s an upbeat song about moving on in life and seeing new places after the breakdown of a relationship. Much more positive than the standard breakup song it feels like a classic in the making for the broken hearted.

I Took It With Me returns to the typical guitar driven Aldean sound and rocks along. It’s one to be careful of when you’re driving because it might just lead to some pedal to the metal stuff. It also boasts another great guitar solo which is a fantastic part of Aldeans sound.

On Don’t Change Gone the tone is brought down to a more mellow sound. Once again however Aldean deals with the pain of a heartache in this song. I guess it’s a strange thing to accept when you know that he is a happily married man. If you’re looking for good songs this is fine but it really lacks a personal touch.

You can tell from the title of this one what it’s all about – Miss This Girl. Another mid-tempo rocker about lost love. All very nice but starting to feel a tad repetitive.

Two Night Town is a slow burning song that never feels like it really gets going. You feel ready for it to kick in all the way through but it doesn’t really happen. The theme is again based on drinking the night away after losing a love.

Fast Lanes is about moving on and being a hard guy to tie down. Perhaps it’s a little more relevant to a touring musician like Aldean. Again it’s not a particularly memorable song.

With Too Much You For Me we get the classic loud intro with guitar riff before it dies down to Aldean’s vocals. It has to be said that by this point the clear pattern of Aldean’s songs is becoming obvious and a little predictable.

The final song on the album is Ain’t No Easy Way is a nice ending to the album. It’s an uplifting song in which Aldean sings ‘Life is hard but love is harder’ and urges us to remember that it’s ok to struggle from time to time in life. With it’s haunting slide guitar and organ it’s an anthem in the making. 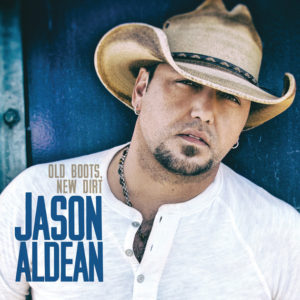 With this album Jason Aldean is not pulling up any trees. At 18 tracks it is definitely a long album and this is perhaps not always a good thing. By the end of the album it feels like we’ve heard each song three or four times – they’re all very formulaic mid-tempo country tracks. Personally, with the exception of My Kinda Party, I have always felt this way about Jason Aldean. His albums make great background music but don’t really do anything outstanding. As I mentioned in the review it just doesn’t seem like a personal album to him. When we look at an album like Dierks Bentley’s Riser we can hear the pain in his voice and feel the experiences that have led him to these songs whereas with Aldean it just feels like a collection of average country songs. As a fan of country music it doesn’t offend me in any way but perhaps the fact it is so inoffensive is part of it’s problem. Eric Church released The Outsiders exactly a year a go and that did offend some people but it meant that those who liked it really felt a connection to it. There is no doubting that Aldean is a great singer and has great musicians around him but I just feel like we are waiting for a great, personal record from him… and this isn’t it.