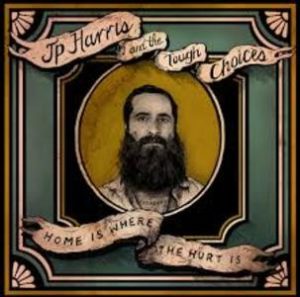 I have an aversion to beards. I am quick to judge, often incorrectly, a hirsute man. Perhaps this stems from the fact that when I try to cultivate a growth I look like a tramp. Jealousy it seems makes me discard any artist with a beard. This is why I was late to the wonderfulness that is Jamey Johnson. Saw the beard, judged, 6 months later heard him, loved him, kicked myself. Sturgill Simpson, beard, written off, 6 months, self kicking happened for a second time. I am a beard racist.

Sometime last summer, Nashville native, JP Harris put together a Kickstarter campaign to fund his second original album, he met his target pretty swiftly and the fruits of that campaign were released late last year, Home Is Where The Hurt Is. It has to be said JP has a serious beard going on. This ain’t no, had Christmas at home, can’t be arsed to shave, this is a committed beard. This facial hair is why, foolishly, I am only just getting round to reviewing this album now.

JP Harris says on his website “In short, JP Harris plays Country Music. Not “Americana,” not “Roots,” or “Folk”. JP Harris does not lie. Home Is Where The Hurt Is tells the story of a love done gone. It’s a break up album in the country tradition. Heartache by the numbers. You shouldn’t be grinning and wanting to dance to heartache though? Right?

Ably assisted on this album by his touring band The Tough Choices, local hero Nikki Lake and Old Crow Medicine Show member, Chance McCoy, JP clearly set out his stall with the country album he wanted to make and not one dictated by parts of his home town. This is an album that fits nicely alongside those made by Sturgill Simpson and Jamey Johnson. Its country god dammit.

It’s easy these days to have a slide guitar, or a fiddle and make a record that sounds cheesey, or false. Certainly not authentic. Canadian Daniel Romano achieved this single handedly on his last album. With JP Harris you get the sense that he lives and breathes country music. The country music of Waylon, of Merle, of Dale Watson and Buck Owens.

On “Give A little Lovin’ “, he gives us the sound of the honky tonks, as he implores the protagonist to give him something. An opener that at worst will have you tapping your toe, at best two stepping round the kitchen.

The overall tone of the album belies its message, outside of the opener, it’s an album of heartbreak, of breakups and lost love. But aren’t the best songs built on those foundations? JP Harris does it beautifully, from the Kris Kristofferson tinged “Truckstop Amphetamines” to the Waylon sounds of “Old Love Letters”, JP Harris has given us an album of quality and beauty.

1. Give A Little Lovin’
2. A Breaking Heart
3. South Oklahoma
4. Old Love Letters
5. Home Is Where The Hurt Is
6. Maria
7. Every Little Piece
8. One For Every Day
9. Truckstop Amphetamines
10. Young Men And Old Guitars

Of course its lazy of me to pull up other artists as reference points, this guy isn’t a tribute act. The album is pure country, pure JP Harris country and not someone that is wearing his influences like a badge, more like a memory. The only real problem I have is that at 10 tracks long, it’s gone too soon. Far too soon. It’s an album that leaves you wanting more, that seems faultless, that musically keeps you grinning, that reminds you of that girl or boy that broke your heart, but more than anything reminds you why country music is just so damn special.