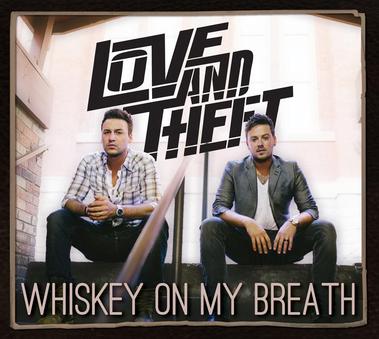 I have more than a soft spot for pop country, when people ask me what music I like and I tell them, all kinds of country, from Hank to Taylor, I like it all, aside from Americana. It the music of the hipster, it’s the music of the indie kid that doesn’t want to commit to country. Screw you Americana! I digress, in that all-encompassing country category I like the mainstream, I like the billboard topping stuff, but some days I shake my head and wonder why Florida Georgia Line exist. I say some days, most days. OK, every day.

It was it has to be said, with indifference, that I sat down with Love and Theft’s second album, initially as part of an arduous train commute. My assumption was it was going to be comparable to the man with odour issues that gets on at Penkridge. You see I don’t hate Love and Theft, I don’t even dislike them. I am just indifferent to them. For me they are like a few US acts that are just bland, Love and Theft, Parmalee, Gloriana. Not offensive, just bland. It also has to be said that there is a UK band doing a similar shtick that are incredibly dull, the difference between Parmalee and said band is I am unlikely to run into Parmalee at Fort San Antone. I have the wrists of a child and I bruise like a peach.

So Love and Theft, specifically their third album, Whiskey On My Breath. In a nutshell it’s as I suspected, inoffensive in the extreme. It’s a pleasant journey that seems to have stayed a little away from pickups and girls. The title track on paper I suspected was going to be an offer to a young lady of a night of whiskey breath and stubble, however Stephen Barker Liles and Eric Gunderson seem to have given us something more cerebral.

That seems to be the case with Love and Theft, they are more introspective than was first suggested, of course the main theme is love but on Get Drunk and Make Friends they channel their inner Toby Keith and give us the ubiquitous drinking song. It wouldn’t take a genius to picture the solo cups being raised aloft when this is played live. Maybe it’s my taste, maybe as I write this it’s the weekend but it works for them, sitting at the end of an album pretty much full of acoustic driven introspection, it’s nice to put a smile on my face.

We will come to the acoustic driven introspection shortly, we need to talk about Tan Lines. I get that you need a summer single. Those cursed b@stards Florida Georgia Line have shown that to put it bluntly, this sh*t sells. This is however as cynical as James Corden playing football with African children to get on the New Year’s Honours list. Reggae beat? Check, Jimmy Buffett mention? Check, Pretty girls? Check. Love and Theft, you disappoint me greatly. But why the hell have I played this cynical stab 5 times in a row???

How do you follow a song about checking out the honeys and tipping it back, obviously with a track called Everybody Drives Drunk. Obviously. It’s not literal, in fact its more that everybody doesn’t. Sorry I should have added a spoiler tag to that. It’s a track that is fairly typical of the album, it’s that introspection I talked about. It’s not a sad album, far from it, if anything it’s an “up” album, but with a liberal use of acoustic guitar and minor chords separates it from their contemporaries.

What I get from Whiskey On My Breath is the same feeling Luke Bryans debut gave me, you see that there is definitely something there, there is definitely talent and quality is hinted at. On Wrong Baby Wrong, a potential single you feel that maybe it would have more punch if the acoustic guitar wasn’t so much in the forefront. On Hang Out Hungover you have a sense that Love and Theft have more to them, but is this a demo? The songs just seem so incomplete. Unfinished. As if presented to them in this form and they thought, yeah, that will do. The songs are good, this duo, on Like I Feel It show they have talent without over use of those country clichés. I am just unsure.

What Love And Theft seem to have done, for me at least, on Whiskey On My Breath, they have given us a great independent debut. but this is their third album. What is apparent though, is from a production perspective at least, they miss the major label backing that their last album clearly had. They will call it stripped back, which if you are Metallica, that will work for an album, but it sounds like a demo. Why not let the songs shine, go one way or the other, all acoustic, or full band, don’t go halfway. You have great songwriters like Eric Paslay and their songs, good songs, interesting and damn tuneful songs are played down by what I hear as bad production. A good album is rendered average. That’s the disappointment. That’s the guy with the odour problem on the 7.12 from Penkridge.