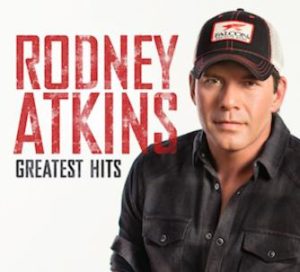 Greatest Hits compilations are excellent in any genre, but for country music they are fantastic. They give an opportunity for artists that that may have been on the periphery of your radar, to show up a little more. Take an artist like Joe Nichols, an artist I love now, but my first experience of him was his excellent 2011 Greatest Hits collection. Then you have an artist like Toby Keith, someone with such career longevity, at the top of his game for decades who has released multiple Greatest Hits packages, a great introduction for new fans, but also for existing fans to have his career highlights in a single format.

Tennessee native Rodney Atkins, for a lot of country music fans in the UK, falls into the category of being on the periphery of their radar. Not all, for some Rodney is a consistently strong artist, with a huge catalogue of immense quality. I fall into this camp. Full disclosure, I am a Rodney Atkins fan, he is part of a small group of artists who, in my eyes can do no wrong. How the hell am I going to be objective in this review is beyond me.

The first track I heard by Rodney Atkins was his 2006 single, If You’re Going Through Hell. I loved it. I played it over and over, but considered that it was a one off and it’s unlikely that anyone could maintain that quality over an album. That track kicks off this collection and trust me, he does maintain that quality.

Rodney based on this collection is a great singles artist, but I stress, if you buy this, and enjoy it, go buy his albums as he doesn’t do duff tracks. The only perplexing thing about his Greatest Hits is why it doesn’t stretch to 2 discs.

Taking his pick from four albums he does his best to please existing fans and bring into the fold new fans. With the added bonus of recent hit single, Eat, Sleep. Love You, Repeat he pulls it off. Showcasing not only ballads in Invisibly Shaken and Honesty, two songs rooted in country. Slow, measured and allows you time to take in the lyrics, to take in the story. The story is after all what makes Atkins strong as an artist.

In Watching You we have a son copying his dad, both the good and the bad, from swearing to saying his prayers. The father and child motif isn’t restricted to Watching You, fatherhood is a theme that features highly in his albums and is represented, not in a schmaltzy way on this collection in  He’s Mine and Cleaning This Gun. The latter is a telling of that old joke, and for some, one of Rodney’s signature songs.

What Rodney also does very well is lifestyle songs, those songs for country fans that make us want to be in their shoes, On Take A Back Road, he had a song I must have played a million times between Stafford and Birmingham on my commute, the M6 isn’t the dirt road that Rodney was alluding to I suspect. In About The South I further suspect he wasn’t talking about High Wycombe. As country fans he gives us insights, peaks into a lifestyle that is removed from clichés. He allows us to be part of that.

The issue with this compilation is narrowing it down. Pleasing every one, where is A Man On A Tractor? Chasin Girls? Feet? Also what would have been pleasing would be a track from his hard to find self-titled debut. These are minor criticisms, but criticisms none the less.

As Greatest Hits go this is as good as it gets, it showcases what I love about Rodney Atkins, the story teller. He tells his tales and you want to listen to the end. You want to see what the next verse will give you. You want to see where this journey is going to end up, be it on a back road or the M6, (spoiler, it isn’t the M6). I like the assurance of Rodney’s voice and his ubiquitous backing vocalist, Angela Hurt. I like his representation of America and I like that he maintains his sound when around him country music is changing. Realistically Rodney Atkins should be a superstar of Garth Brooks or Blake Shelton’s proportions, maybe with this collection the world will catch up.

If You’re Going Through Hell, Farmers Daughter, About The South