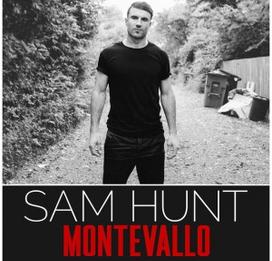 I first heard Sam Hunt last year during the Billboard Country Songs rundown, inoffensive, but I think at the time he was bolstering up the lower reaches of the 40 and as I tend to listen whilst drinking wine and cooking I hear a whole load of Florida Georgia Line and very little number 38. That’s the fault of wine.

As time went on though, Sam Hunt got a lot more column inches on blogs and in country music magazines, getting much praise. Justified? I wasn’t sure. Early this year out of the blue Sam announced a date in London, odd, but totally welcome. Then at the announcement of the Country To Country Festival pop up stages, Sam Hunt would be playing a satellite stage in the main arena on a bill that also contains The Shires no less. Exciting times.

So with all of this, I come to Sam’s album, Montevallo. Sam definitely has a pedigree, penning songs for Billy Currington in “We Are Tonight”, “Come Over”, the Kenny Chesney track and Keith Urban’s hit “Cop Car”. All songs I really like. I was definitely looking forward to this album. Would it live up to the hype?

I want to set the scene for you, I am sat at a table in my dining room, my wife is cooking something and Montevallo starts on the stereo. The reaction from the dining room is “this isn’t the right album”, the reaction from the kitchen was peppered with the language of a building site. You see I thought we were both listening to Usher.

I did persist though and the reason I say Usher is that the R n B (in the modern sense) is very strong in Hunts vocals, but also in the production. Yes it has country themes and I guess that’s what I should focus on. It’s difficult though as Sam seems intent on peppering his tracks with auto tune, with a staccato rapping and with electronic drums. The latter is kind of weird as 5 separate drummers are listed on this release. I wonder if they made the tea?

The songs though, the songs are pretty OK, in isolation, they ooze summertime which considering this is a winter album, that’s going some. For that reason I see this sticking around as a mainstay on the Billboard charts into Spring and beyond.

What Sam Hunt does demonstrate is that he is an adept songwriter, the arrangements withstanding, he shows on “Take Your Time”, “Leave The Night On” and “Break Up In A Small Town” that he can turn his hand and turn it successfully. The writing partnership with producer Shane McAnally from a commercial perspective is giving fruit.

The obvious standout track is the original of “Cop Car”, a solid song that has exceeded 700,000 sales when released by Keith Urban. The two versions are identical and career wise a canny Hunt would be wise perhaps to take a few lessons from Keith.

The problem with this album though is not the songs, it certainly isn’t production as Shane McAnally is an exceptional producer. It’s not even Sam Hunt, he is a likable guy and although these tracks won’t be going down as classics, they do produce a temporary pop thrill. The overriding problem with this album is that it’s at times too far from country music to feel as if we are still in the genre. Even in the broadest sense I think Sam Hunt might be too far away. I don’t expect him to be walking in Haggard’s boots, or even Toby Keith’s, but at times he makes Cole Swindell sound like Hank Jr. This is a mistake that Jerrod Niemann made on his last album and I feel that was an error he will struggle to return from. As for Sam Hunt, if sales are any indication, people prefer his take than that of Niemann.