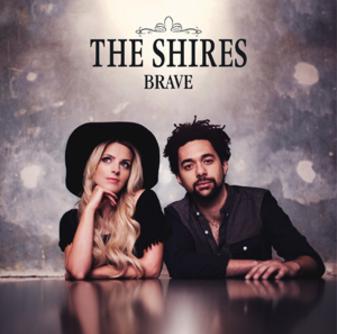 The Shires are at the forefront of the new UK country music movement which is growing bigger by the day, along with acts like Ward Thomas they are working along with Nashville’s best talent and building a scene here in the UK. Having only formed around eighteen months a go they have gone from strength to strength in appearing at Country 2 Country festival, touring the country and supporting Opry members and Grammy award winners Little Big Town on their recent UK tour.

With the speed that things have taken off for the band it feels like we have been waiting an age for this debut album Brave but in reality it’s been relatively quickly produced. Having played last years C2C festival they were flown off to Nashville and the journey began. When we saw the band at their support show for Little Big Town in Manchester they pointed out that, based on pre-sale details, there is a chance this album could go into the top 10 which would be an achievement of seismic proportions not only for the band but for country music in the UK.

The album kicks off with the rousing Tonight which is about as good an introduction to the bands first record as you could ask for. Having heard a simplified version on stage a couple of times this just blows away all expectations I had of the song. It’s a real wave your arms and sing-a-long number. The opening lines ‘It’s a brand new day, I can feel a change’ could well be relevant now the winds of change blow in to British music straight from Tennessee.

Nashville Grey Skies is another upbeat sing-a-long number in the same vein as Tonight. Once again Ben and Crissies vocals combine wonderfully. It’s a song in which you can really feel the passion of the two coming through your speakers. Lyrically it’s another hopeful number about creating our own Nashville in England as much as I love the song I do struggle with some of the lyrics which feel a tad contrived such as ‘It’s way too cold for cut off jeans’ and ‘they won’t be drinking moonshine, they’ll have G&Ts’. Maybe that’s just me though.

The third song on the album is the piano driven title track Brave. Chrissie Rhodes opens it up with her stunning vocals; there really can’t be too many better singers around at the moment. About a third of the way the song kicks in to full ‘lighters in the air’ mode. The driving guitars and soaring vocals will make for an amazing live performance with a full band.

Friday Night was the first single from the album and, although it’s not one of my favourites, it’s clear to see why. It’s laidback groove and feel good lyrics are the epitome of the current Nashville country sound that is commonplace with songs about going out and having a good time. It has a great feel good chorus that should get crowds singing. It feels almost like an English pop/rock song from the late nineties and I think that’s a good thing…

I Just Wanna Love You brings the pace of things back down again. Ben Earle sings along with a piano and acoustic guitar at the start and really showcases his strong vocals. The emotional chorus being filled out by Rhodes and her soulful voice – she almost sounds like LeAnn Rimes in this song and that is definitely a good thing…

After a quick breather things get going again with All Over Again. It’s another jaunty and upbeat number which it’s impossible to feel down listening to and stop your foot tapping.

Jekyll And Hyde is a little more rocky and in your face as it starts. I feel with this song that we’re  listening to something a little more personal in it’s lyrics. To me it sounds like the type of song that would fit perfectly on the soundtrack of the Nashville TV series. This time around Chrissie Rhodes shows off some seriously powerful and bluesy vocals. I may have been critical of her on stage banter at live shows but her voice is outstanding – hopefully she will get more chance to show this off the bigger their live shows get.

One of my favourite songs from seeing the band live in the last year has been State Lines. Again this is a song that is packed with American references and this can feel a little like they’re trying to appeal to an American audience a little too much. That being said the duo did spend time writing in the States so this could easily be an influence. Either way it’s another beautifully crafted ballad.

Black And White opens with another quiet and moody piano part that builds up in to a soaring chorus. It’s not as memorable as some of the similar songs on the record but it’s still great.

In Made In England we could have a new national anthem. It’s great, especially after I’ve mentioned the frequent American references, to have a song on the album that is dedicated to England. It’s a dreamy number which could make any Englishman abroad shed a tear thinking of our home country. It’s nice to see a bit of patriotism in English music! Just as long as this doesn’t develop into The Shires becoming the English answer to Toby Keith!

The regular version of the albums ends here and by the time we get to How Many Love Songs I feel like we are ready for something upbeat again but unfortunately this doesn’t provide it. It’s a lovely song with great combined vocals from the two singers but unfortunately for me doesn’t grab my attention – maybe this is mostly down to its placement on the album though.

It’s a shame that Only Midnight didn’t make it on to the standard release of the album. This is the upbeat number that we’ve been waiting for and produces the perfect end to the album both musically and lyrically. It’s another song that should work wonderfully in front of an audience with a full band.

The ‘deluxe’ version of the album has three other songs that include covers of Islands In The Stream and Young Hearts that have become firm live favourites for the band.

13. Islands In The Stream (Deluxe Version)

14. Drink You Away (Deluxe Version)

This really is an outstanding debut album from a band who are leading the way not only in Engish country music but in English music in general. The quality of songs like Tonight and State Lines is astounding considering the length of time that the band have been together. It seems that their writing experiences with Nashville writers have only helped them create something wonderful in bringing two worlds together. The vocals from both Chrissie and Ben are superb throughout with Chrissie showing off versatility that a lot of current pop singers and talent show hopefuls would be green with envy over. Having heard a lot of these songs live on a couple of occasions I wondered how they would transfer to a record and the answer is incredibly well. The production and musicianship on the album is top draw. My only negative to pick out is that towards the end of the album I feel there is a slight lull but, again, with the amount of time they have been together the pool of songs to dip in to may not be that big. All in all this is a fantastic record and a huge step forward for English country music.