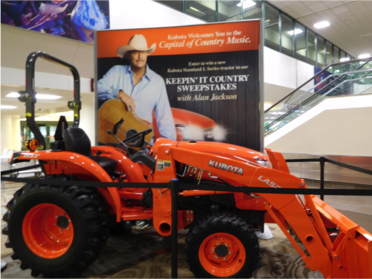 I recently celebrated a big birthday and when I was considering things I’d like to do for that birthday, there was really only ever one thing on my mind – I wanted to fulfil a dream and go to Nashville. I’ve never been anywhere in the US that wasn’t on a coast so I knew it would be a big enough adventure just getting there and back (oh and it was!) My main reason for wanting to go though was for the music.

From the minute we arrived, we were surrounded by music. In the airport, there was a branch of Tootsie’s Orchid

Lounge, the world famous Honky Tonk bar located on Broadway in Downtown Nashville. There was also a great big

advert for a tractor endorsed by Alan Jackson. We were already smiling by the time we left to pick up our hire car.

The first proper gig we went to was at The Bluebird Café. It had taken me two goes to get tickets for a show using their

automated reservation system for the grand total of $10.92 and a $7 drinks/food minimum per person. It turned out to

be worth every cent.

The night we went was an In the Round event presented by ASCAP (The American Society of Composers, Authors and

Publishers). There were four singer/songwriters performing and they were all excellent. It’s such a small venue and there

was no stage, the artists were just in the middle of the audience and this made it feel so intimate, just as we’d hoped.

Spotify and doing fairly well for themselves. The evening was presented by Jonathan Kingham, a folk, pop, country and

jazz musician from Seattle. Each artist took a turn at introducing themselves and singing a selection of their songs, just like the CMA Songwriters’ Session at the O2 during C2C if you went along to that.

Jonathan was followed by Austin Jenckes, from Washington State, who has his roots in both country and folk music. He had a big, gutsy voice, which was a real joy to listen and sing along to. Andrea Pearson was up next, a Canadian singer who has written over 500 songs since driving the 2,500 miles from her home to Nashville. Andrea had a beautiful voice and played her guitar with real passion too. She had another guitarist with her as well and when they played and sang in harmony together, it was fantastic. Last of the group was a jazz and blues singer/songwriter from Seattle called Ryan Shea Smith. Another experienced musician, who really knew how to play a keyboard. He even threw in an impromptu bit of rap, which was all great fun. 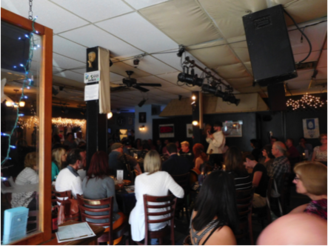 They all played and talked for a good two hours and at the end, we bought two CDs by Austin and Andrea. We’ve been listening to them in the car and at home since and they still sound really good. I would really recommend you to try for a gig at The Bluebird if you go to Nashville. Apart from anything, it’s iconic but when you go, you’ll see why. 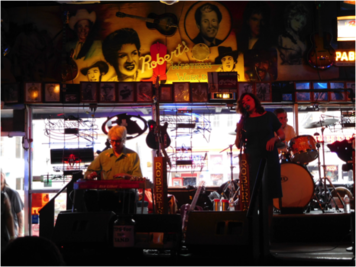 The next night, we decided to have a go at the Live Band Karaoke offered by The Hard Rock Café. This may not be your cup of tea but we all love to sing in our family and even though we were stupidly nervous, we thought we’d be able to do pretty well. That was until the first local

stood up! She was a fantastic singer. She sounded so professional, although it was obvious that she was a regular

and there were many others just like her. It was such good fun to be a part of though and we left on a real high. It

the drop of a hat, including our waiter!

On the Friday lunchtime, we decided to brave it and go to one of the Honky Tonk bars. We’d been advised by a

friend that if we were only going to go to one, we should go to Robert’s Western World. As our children were 13

and 17 years old at the time of our visit, we couldn’t take them to one of these bars after 6pm so we knew it would

have to be in the day and this bar was the real deal. The band was brilliant and played some great covers that

everyone could join in with.

Saturday was the day for our Grand Ole Opry visit. We had no idea what to expect but we knew we really wanted

to go and I might have had my eye on a certain Chip Esten who was performing that night as well. If you’ve ever been, you’ll know what a massive venue it is and that surprised me a bit as we’d paid quite a bit for our seats but we were quite a long way from the stage. It didn’t matter though once the show got going. We could hear and see everything really well and it was another great Nashville show. The fact that they do adverts for their sponsors after every segment is a little off-putting at first and dare I say, a bit cheesy but it was all in such good spirit that we were all laughing along. My younger daughter absolutely loved it! 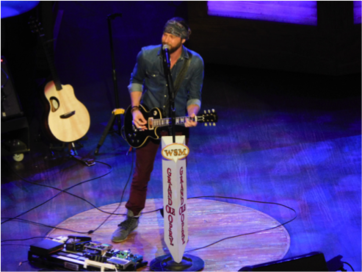 We heard a good mix of singers, old style and modern and we really enjoyed the square dancers! It is a great family show but you do have to accept that it has a certain style, which might not be to everyone’s liking (heavy on religion etc) but if you can just relax and join in, I’m pretty sure that you’d enjoy it. Anyway, you have to go at least the once just to see the circular piece of wood cut from the stage of The Ryman and installed here as a reminder of where The Grand Ole Opry came from.

So, it was a great trip and one I hope I have the pleasure of making again in the near future. If you’re thinking about it, you really should go. The people are lovely and the city is compact and full of interesting places to visit. And did I mention the music?