Husband and wife Jessi Alexander and Jon Randall immersed themselves in this years festival making a total of three appearances including one at the CMA songwriters series show on Friday night. The two have a wealth of experience as Nashville songwriters and have released their own albums in the past all of which they brought to the O2 Arena. We caught them on both the Market Square Stage and the Music Mile Stage and both times they grew huge crowds and really impressed.
The two have a great onstage manner and a clearly comfortable performing especially with each other. It was great to hear them play some of the songs that they have written for themselves as well as others. Real highlights were a version of Dierks Bentleys Am I The Only One and The Climb which was made famous by Miley Cyrus and then, unfortunately, X Factor alumni Joe McElderry. It was great to hear The Climb sung by Jessi and gave me a new appreciation for what a great song it is.
As they finished their set I couldn’t help but think they would seamlessly fit in on the main stage. The calibre of their songs and the quality of their voices made them my outstanding pick of the pop up stages over the weekend.

I made sure I caught Laura at this years festival on the strength of the great recommendation from our writer Peter Donohoe who tipped her to put in a top notch performance and he was spot on!
We managed to catch Laura performing on the Town Square stage on the Saturday and were blown away by her voice. She attracted a great crowd to watch her and was more than deserving of it. A wonderful cover of Rascal Flatts God Bless The Broken Road that was sung to perfection also complemented Laura’s energetic set of original songs. On this performance she is definitely someone who has attracted our attention and we will be having a good listen to her recordings.

We caught The Rising on the Grand Entrance stage on Sunday afternoon and saw a promising set from the band. They are clearly a group who are on the rise and we were excited to see what they had to offer. Much like a lot of the other bands who appeared on pop up stages it was an energetic set although when I first came into the arena I thought they sounded a bit like a country version of Madness… Maybe that was just me though. It was another set that prompted us to go home and have a listen to their album. Admittedly we didn’t catch the whole set and we are definitely aware that they have good things ahead for them.

Lisa played The Saloon stage at this year’s festival and put on a great solo performance. We managed to catch most of the set and Lisa’s voice was in fine form. The fact that The Saloon was packed out for the show said everything about the fan base that Lisa is building at the moment and her interaction with the crowd displayed a great confidence onstage. It’s not easy to play a solo acoustic show with nowhere to hide and we really enjoyed watching Lisa do it.

I first came across Callaghan via Bob Harris’s Radio 2 show (like many other good artists!) after hearing a song called ‘When You Loved Me.’ I tweeted about how much I liked it and Callaghan responded. When I then liked her Facebook page and made a few comments, she often replied and it was this, as well as her wonderful voice that drew me in. She is genuinely a lovely person and I like the personal approach that she takes to her fans.
So I was very excited to hear her sing at the C2C Festival when I was there again on Sunday. She sang and played guitar and keyboard and was accompanied on keyboard and vocals by Adam Wakeman. They kept it really simple and it worked very well, allowing us to hear her lyrical voice and to appreciate the harmonies too, which is what I love so much about her music. 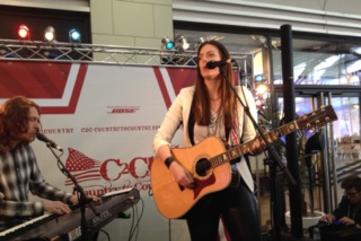 As Callaghan’s new album, ‘A History of Now’ is out in April, she mainly played songs from that, starting with ‘Crazy Beautiful Life,’ a lovely upbeat number, which got everyone smiling straight away. She also played the 2015 version of the song ‘Best Year,’ recently added to the BBC Radio 2 playlist, and another catchy, optimistic song, originally written when she first went to the States to pursue her dream.
She asked the crowd to join in on ‘Noah’s Song,’ which she explained was written all about her hopes and dreams for her nephew. I knew this song because Callaghan has been running a competition on her Facebook page and on her website, encouraging fans to send in photo entries to be included in the lyric video she is making for the song. I love the idea and the competition is still running if you’d like to take part. Oh and the song has an accordion in it!

What’s not to like?
She sang a more poignant song, ‘Who Would I be?’ on her own from the keyboard and if you hadn’t already come to appreciate the strength of her voice by now, you couldn’t fail to after hearing her sing this one. Her last song from the new album was ‘We Don’t Have to Change the

World,’ which I noticed many of the crowd around the tiny ‘Big Entrance’ stage singing along with.
The one song she sang which was not from the new album, was a version of the Johnny Cash classic, ‘Folsom Prison Blues,’ which once again she asked us to join in with, making a ‘Whoo Whoo’ train noise. It was fun and she did a good performance.
Callaghan is now on her way back to Nashville, where she is mostly based, to start her album preview tour over there but she will be back in the UK on 11th April for more shows. I really would encourage you to go and see her.