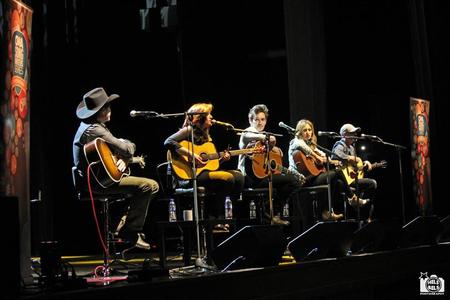 Last year was my first visit to the Country-to-Country (C2C) Festival at the O2 and I had such a good time that I knew immediately that I would go again this year. This time though, I  decided to buy tickets for the CMA Songwriters Series event as well to get the whole weekend off to a great start.

I’d never been to this kind of event before but I knew that the five artists would be on the stage together and that they would play their songs and tell us the stories behind them. I have to confess that I had only heard of Brandy Clark (from her collaboration with Kacey Musgraves) and Sam Palladio (from the wonderful TV show about Nashville) before buyingthe tickets but that was enough to inspire me to go.

The Indigo at the O2 is quite a cosy venue, seating 1,700 people on two floors and althoughI would have preferred seats a bit further away from the noisy Dyson hand-drier in the ladies’ loos (!), we had a good view of the stage and the sound in the venue was fantastic.

Kix Brooks, a bit of a country music legend as I soon found out, was the host for the evening and he brought a real sense of fun to the whole proceedings. The format was simple: each performer played one of their songs and told us the story of how the song came to life. They played four songs each and I was amazed at how many songs I recognised as great country hits and favourites of mine.

Kix Brooks showed a wealth of experience in the songs he chose to sing last night. The two songs that stood out for me were ‘Let’s Do This Thing,’ a real upbeat country song that got everyone’s toes tapping, and ‘Sacred Ground,’ a much more heart-felt, poignant song that reminded me of everything that’s great about country music.

The show really took off for me when Brandy Clark played the hit she co-wrote with Kacey Musgraves, ‘Follow Your Arrow.’ I love this song and it was great to hear everyone singing along. Brandy has a very different voice to Kacey, who I was lucky enough to see last July, but she is a talented performer as well as songwriter and I loved the sound of her voice on all the songs she sang. Her performance of ‘Hold My Hand,’ which is from her new album ’12 Stories’ was stunning and I have already listened to it again several times today.

Sam Palladio seemed to feel a little bit awkward, sitting up on stage with some of the greatest country songwriters ever and without even a record to his name. However, he is such a lovely guy and he’s also a great singer. His song writing undoubtedly has some room to grow but he played some interesting songs and told some great stories to go with them. As a storyteller myself, my favourite one of his was the story about his song, ‘Wake Me Up in Nashville.’ He told us how his grand-dad had been in Florida training to be a fighter pilot during the war and how he had a met a girl from Nashville whilst he was there. When the time came for him to travel home, he asked the train conductor to wake him up when the train got to Nashville so he could say his goodbyes to the girl he’d met on the train platform…but the conductor forgot to call him. This inspired him to write the song and he gave a great performance of it. I loved another new song he performed too called ‘Lightning Bones’ and I hope he does as well with his singing career as he has done with his acting.

The last two acts on the stage were husband and wife songwriters, Jessi Alexander and Jon Randall. They were the stars of the show for me and yet I’d never heard of them and perhaps some of you won’t have either. Oh but the hits they have written and not only that but they were such great performers too, both with their singing and their guitar playing. Jessi said that she has been credited with writing some of the saddest country music songs ever written and I definitely shed a tear or two, maybe even three, when she sang ‘I Drive Your Truck’ and ‘Whiskey Lullaby.’ The story she told about how she came to write ‘I Drive Your Truck’ with her co-writer was incredible and it’s probably one of the few songs with ‘truck’ in the title that I will listen to again. It was a hit for Lee Brice and he sings it really well but that song belongs to its writer, in my view. As for ‘Whiskey Lullaby,’ co-written with her husband, which was a hit for the wonderful Brad Paisley and Alison Krauss, I defy anyone to watch that video and not end up crying.

Jon Randall has worked very closely with Dierks Bentley in his career and so played a number of songs he’d written for him. Once again, he was a fantastic performer and his guitar playing was amazing. My favourite one of his songs was ‘North Carolina Moon,’ a beautiful country song, with quite a bluegrass feel to it.

As if all this wonderful talent on the same stage wasn’t enough, halfway through the set, they were joined by none other than Striking Matches. They performed only one song but boy, was it a good one. I saw them on one of the pop-up stages last year but couldn’t really hear them that well and so didn’t get into them that much. Last night though, they came on, tuned up in a matter of minutes and got straight on with a breathtaking performance of ‘Make a Liar Out of Me.’

This was a brilliant show and one I’m really glad I went to. I’ll be back at the show on Sunday but next year, I’m going to go for the whole weekend, come hell or high water! I’d definitely recommend you to do the same.