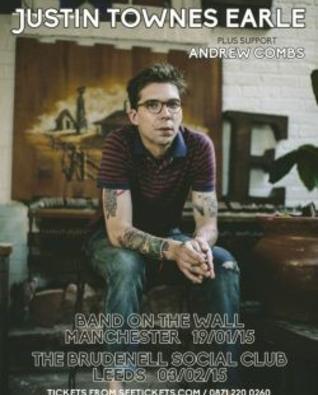 Justin Townes Earle may be the son of an Americana/Country legend but he is very much his own man. Having
just released the second part of his ‘Absent Fathers’ and ‘Single Mothers’ two part album he’s hit the road in the
UK this month for a short tour and Six Shooter Country went down to Brudenell Social Club in Leeds to catch
one of the stops.

Texas born singer-songwriter Andrew Combs was the opening act for the show and did not let us down. Having
just released his second record in the UK under Loose Records he was not someone I knew much, if anything,
about before this show. It has to be said that his set was absolutely superb. Armed with just his acoustic guitar
and his powerful voice he flew through a half hour set of songs that kept the audience intrigued and even
managed to get most of those sitting on the floor on their feet. The final song, and his latest single, ‘Foolin’ was
introduced as being about “how people like to create social media profiles which present a much cooler version
of themselves… And that’s kind of f**ked up”. After his set Combs went to the back of the room and worked
the merchandise stand – there’s always something impressive and humbling about an act selling their own CDs
after wowing an audience. This is someone we really recommend you check out – we were lucky enough to
have a quick chat with him afterwards and will certainly be doing a review of his album ‘All These Dreams’ soon.

At 9:15 Justin Townes Earle made his way on stage and immediately endeared himself to the crowd. Playing
with just himself and back up from pedal steel and slide guitar virtuoso Paul Neihaus it made for a laid back set which was interspersed with Earles great story telling. Its almost surprising that the somewhat geeky looking Earle looks so at ease on stage and talking to an audience. Although being the son of a superstar perhaps we shouldn’t be surprised. There were no awkward silences between songs as Earle told stories ranging from his unease at his wife’s love for downhill speed skiing and the amount of people branding him a racist for selling a t-shirt with an image of a native American on it – despite the fact he is of Native American heritage himself. Perhaps it’ll have come as a welcome rest bite to tour in the altogether more liberal United Kingdom. As he bemoaned the selling out of Nashville and other American cities it became clear that Earle is perhaps not someone who is comfortable in the time he is living.

The songs themselves moved along nicely through his back catalogue whilst still focusing on his newer albums. I’d personally like to thank the older gent stood (swaying) next to me who kept shouting “Harlem River!” at the top of his voice between songs – I’m sure Justin appreciated your timely reminders to play one of his more successful songs. Musically, the decision to bring along Paul Neihaus on guitars was genius. The gently wailing pedal steel added real ambience to the atmosphere on the slower numbers whereas the slide guitar provided a real groove on the up-tempo songs. It filled a small venue like the Brudenell Club out perfectly – to the point where a full band were not missed at all.

As a country music fan who is presented with the dreamy vision of Nashville provided by the TV show of the same name it was refreshing to listen to Justin talk about his dislike of living in Music City and the way he feels it has changed over the years. An interesting perspective on the industry from someone on the outside of the circle. This, and most other things Earle had to say, provided perhaps the most enjoyable part of the night. Although the music was great, there’s no doubting that, his personality made the show truly engaging.

The set finished on the hugely popular ‘Harlem River Blues’ which was greeted like a lottery win by the drunkard next to me. All in all in was a well crafted and engaging set by Justin Townes Earle. With the impressive opening slot from Andrew Combs it almost felt like a double headliner – he was that good. Although Earle flits on the borders of folk, Americana and country and his records don’t always have too much of a punch to them I would highly recommend seeing one of his shows.