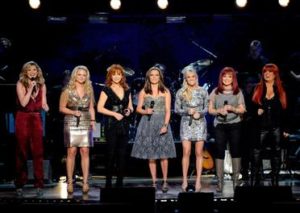 Country music has been dominated in recent years by the ‘Bro Country’ phenomenon. Acts like Florida Georgia Line, Luke Bryan, Cole Swindell, Brantley Gilbert and more have taken control of the airwaves with songs about girls, beer and trucks. As a result it has been tough for much else to find it’s way to the forefront. It’s worth setting my stall out now – this isn’t an article slating any of that music, in fact I believe that there’s some really great stuff out there in that category. This is more of a problem about the lack of variety that we have seen and are seeing. However; now there is a collection of people looking to change that.

The girls are back. Led by megastars like Miranda Lambert and Carrie Underwood there is a stable of female country stars who are starting to take back the genre. The eighteen months or so has seen debut albums from the immensely talented Kacey Musgraves and Brandy Clark hit the charts. Funnily enough the aforementioned two have been quietly working in the background for a long time writing songs for other artists that have seen great success and popularity.

Country music has always had a reputation for being a ‘mans game’. This isn’t perhaps anything more than a stereotype or a relic from the past but all the same it’s what the non-country loving public seems to think. When one looks back at the history of the genre it’s obvious to see that some of the biggest and most legendary names such as Johnny Cash, Willie Nelson, Waylon Jennings and Hank Williams have all been men. But this isn’t the whole story; Dolly Parton, Loretta Lynn and Patsy Cline prove that women have always had a place in the genre. The sad thing has been that, especially in the case of Parton, more attention has been paid to her appearance than her unbelievable songwriting talent.

The modern day country chart is full to the brim with male acts. Not only male acts but male acts being macho and singing about the stereotypical male things whilst wearing vests and, in the case of Brantley Gilbert, knuckle dusters. This doesn’t mean the music isn’t as great to listen to but it closes a huge market off for the women – could you imagine Kacey Musgraves singing about hanging out with a guy in short shorts in the back of her truck and strutting round the stage with a knuckle duster?

It’d be fair to say that the majority of the female acts that come to the fore recently have more to say on a wider variety of things in their songs. If we look at some of the biggest hits in the last few years; I Drive Your Truck which Lee Brice had great success with was written by Jessi Alexander, Sweet Annie and Goodbye In Her Eyes which Zac Brown Band released were both written by Sonia Leigh and Darius Rucker’s Love Without You and Keith Urban’s Come Back To Me were written by Brandy Clark. Straight away it’s clear to see from that list that the more tender and heartfelt songs on many modern male country albums have been had women behind the pen. Again, this isn’t to say that male country acts aren’t capable of producing these types of songs, that just wouldn’t be true.

The door seems to be opening to more and more females in country music with Musgraves and Clark both receiving big nominations at the CMA and Grammy awards this year. Brandy Clark is a particularly interesting example. Openly gay, she has received great acclaim from throughout the country world, something which might not have been the case as little as ten years a go. This opening of minds can only be a good thing for such artists – after all what difference does a persons gender, sexuality or race make to the quality of their music? Answer: none at all.

Brandy Clark was behind the song Follow Your Arrow which Kacey Musgraves released in 2014. This song was like dropping a grenade in some country music circles. Most ridiculously it was referred to as “an attack on Christians”. I think certain people would suggest that folk of this opinion are perhaps flattering themselves. I’m not sure that Brandy Clark and Kacey Musgraves set out to attack Christianity. The positive side of this song is that it was a success for the most part and has shown encouraging signs of the shift in tolerance with country music.

Miranda Lambert and Carrie Underwood have joined the big players in country music such as Brad Paisley, Blake Shelton and Luke Bryan on an even keel now. Lambert’s Automatic album was a huge success and led to massive acclaim. Not only that but it was a serious record that could easily have been seen as the best of 2014. Lambert is now in a position to headline any festival or perform at any award ceremony and quite rightly so – she’s the real deal. Her barnstorming performance at the Grammys just proved how seriously she is being taken, not just by the country world, but by the music industry in general. Carrie Underwood has just taken a brief maternity leave but has shot to global stardom in recent years. Her vocal performances are just about as powerful as you could ask for and her stage shows open up the genre to a young audience. Oh, and there’s some girl called Taylor something who did pretty well for herself but we don’t talk about her any more…

Legendary acts like Reba McIntyre, Lee Ann Womack, Martina McBride and LeAnn Rimes are still working hard and we are also seeing newcomers like Maddie & Tae, Raelynn and 2 Steel Girls. Aside from the solo acts we have seen the world beating Lady Antebellum with Hillary Scott front and centre as well as Kimberley Perry representing in The Band Perry. Not to mention Miranda Lamberts all female ‘supergroup’ Pistol Annies with Angaleena Presley and Ashley Monroe.

The ABC TV show Nashville has had a huge impact on country music. Not only has it opened the music up to a whole new audience and given it a huge platform it has also offered a balanced view of what country music is. Alongside the male stars like Charles Esten (Deacon), Sam Palladio (Gunnar) and Jonathan Jackson (Avery) we have the females likes the immensely talented Clare Bowen (Scarlett) who has already dueted with Zac Brown Band, Hayden Panetierre (Juliette) and Audrey Peeples (Layla). The show has presented an unbiased array of acts and created a whole new interest in female country singers.

Over in the UK Sasha McVeigh and Sonia Leigh are currently embarking on a UK co-headline tour and the Ward Thomas sisters have written and released a well received debut album as well as extensively touring. In fact in the UK there is an argument to say that the girls are leading the way with country music. Laura Oakes and Jessica Clemmons of Jess and The Bandits can be added to that list as well as Crissie Rhodes from The Shires and plenty more. It’d be fair to say that the girls rule the country scene in the UK right now. Maybe this is due to the difference in cultures between the UK and America or maybe it’s because the scene is only really just getting started.

During our recent interview with Sonia Leigh she mentioned that she’d like to see women in country music given as much credit as in pop music. She’s right – acts like Iggy Azalea, Nicki Minaj and more are some of the bigger acts in the pop world who are shooting to super stardom. There can be no doubting that a lot of the girls in country have more than enough talent to rub shoulders at this level.

It must be said that we love male country acts and we don’t want them to go anywhere. Dierks, Luke, Brad, Darius and the rest are unbelievable at what they do. There is no disputing that, from the sensitive singer songwriters to the bro country boys in trucks, we have time for them all. But it’s great now to see so many talented female artists finally getting a share of the spotlight and this must keep going. Although I stated earlier that it can be a stereotype to say that sexism is evident in country music it still has some elements of truth. Although record companies are no longer made up of fat chauvinists in Stetsons it does still seem to be harder for women to make the step into the big time. Some of the music that has come from female artists of late has been superb – and that is the most important thing after all. It’s all about the music and the girls are doing a damn fine job of producing that at the moment.

The door is ajar and a few are slipping through but it now needs to be swung wide open.