the UK that had seen them visit London, Bristol, Manchester and Glasgow over the course of just six

days. We’d seen the duo earlier this year when they popped in to the CMA Songwriters’ Series Event at

C2C to perform just the one song. That song was ‘Make a Liar Out of Me’ and as I said in my review at

the time, it was breath-taking so we knew this was going to be a great gig.

The venue was packed and when Sarah Zimmermann and Justin Davis came on stage, armed only with

their acoustic guitars and a mandolin but no band, we knew it was going to be a special show. They

launched into ‘Trouble Is As Trouble Does,’ a song from their debut album ‘Nothing But The Silence’

energetic bass line. A few minutes in though, one of Sarah’s strings broke, the first time this had

happened on the tour they said, which is amazing considering the pounding their instruments get!

them further to the audience and showed us what a professional couple of musicians they are.

They went on to play ‘Missing You Tonight’ and ‘Miss Me More’ from the new album. They describe their

style as a blend of country, rock and blues and these two songs showed that off very well, with the first

song a bit more rock and roll and the second, more country in style with Sarah playing her mandolin for

the first time. I loved the way that they stomped their feet and slapped their guitars during each song as

than sitting in Milton Keynes.

Next up was ‘Hanging On A Lie’ the first of their songs written and performed in the TV series ‘Nashville.’ For many of us, this was how we first heard of Striking Matches and it was great to hear them perform these songs themselves. This is a classic country song about a jilted lover and the harmonies over the mandolin are fabulous. This is one of my favourites from the new album and was a great choice for their first single release.

‘He Only Loves Me When It’s Raining,’ a song they’ve written which is not on their album, was soulful and tender, allowing the pair to show off not only how well their voices go together but also how skilled they are at playing so many different musical styles. Some reviews have referred to them as ‘guitar-slingers’ and the virtuoso guitar-playing as seen in this song makes that description seem very fitting. 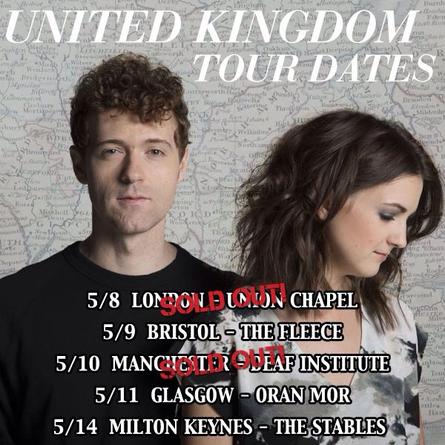 They stormed through a cover of the Buddy Holly and the Crickets classic ‘Not Fade Away’ and ‘Never Gonna Love Again’ from the new album before slowing things right down and singing ‘When The Right One Comes Along’ which is perhaps their most well-known song written for the ‘Nashville’ TV series. This is another one of my favourites from the album and I was so glad to hear them sing it live. Sarah’s vocals are so pure and haunting on this song and although I love Clare Bowen singing it in the show, it was wonderful to hear Sarah put her heart and soul into it.

They played the title song of the album after this, ‘Nothing But The Silence.’ For me, this is a song with lyrics of real depth and meaning and the live performance really enhanced the tension in the song in a way that the recorded version can’t quite manage. After a cover of Robert Johnson’s ‘Cross Road Blues,’ it was back to the album for a stunning performance of ‘God and You,’ rapidly becoming another favourite for me. I really love Justin’s vocal on this song and, paired with Sarah’s harmony, along with her fabulous slide guitar playing, this is just beautiful.

They finished with ‘Make A Liar Out Of Me’ bringing us full circle. As before, Sarah’s skill with her slide was jaw-dropping and brought the gig to a fantastic end. For their encore, it seemed only fitting that they should sing an Elvis number, ‘Can’t Help Falling In Love With You,’ which only confirmed that they are the sum of so many wonderful musical influences. Striking Matches are back on tour again in the UK in November but they’re also playing at the Cornbury Festival in July.

Keep an eye out for our interview with the band coming soon! 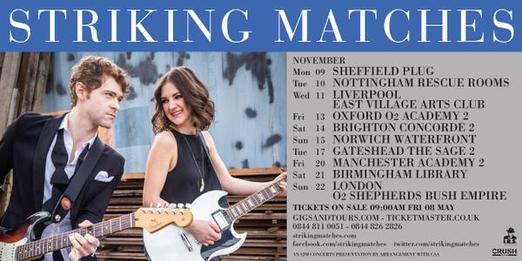