Aaron Watson is an artist who has been plying his trade for a long time. With a whole host of albums to his name already 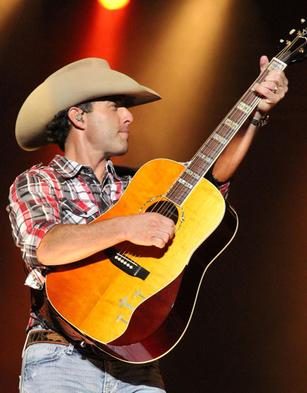 Watson released The Underdog in 2015 and was propelled to the top of the Billboard Country Chart. For an independent artist this was a record breaking first and such success was almost unheard of. Watson poured his heart and soul into the record with the kind of introspective songwriting that it’s hard to find in Nashville, even country music in general, these days but this Texan did it. 2016 has seen Watson find his first opportunity to tour the UK off the back of The Underdog and we were lucky enough to catch up with him before his last show in London…

How are you finding it over here in the UK? Are you enjoying yourself?

Oh absolutely! We feel like it’s home away from home! This is our sixth European tour but our first time in the UK so we’re going to put the UK on the regular tour schedule that’s for sure. It’s been so fun!

You come over off the back of the incredibly successful album ‘The Underdog’. Have you been at all surprised by the reaction to the album?

I’ve been surprised by the media response. The reason we sold all those records was because we’ve been working on our fanbase for fifteen years. To me it wasn’t as a big of a surprise as I guess it was to different media outlets. To me it’s just been a lot of fun, it’s just been such a treat for me. I’ve said this a million times but we’ve been doing this for sixteen years, twelve albums and twenty five hundred shows so to be getting this kind of attention and recognition is just a real treat. It’s something we are very thankful for the opportunity and we give all the glory to God for giving us all of these wonderful fans. It’s just been an incredible year but, you know what? All the years before it were incredible as well, you know, we’ve been making music for a living for a long time now and that in itself is just such a blessing.

What do you think set this album apart from others and gained it that attention?

I think that, as a singer and a songwriter, I’m beginning to mature and really come into my own. I really think that practice makes perfect and I’m still pushing myself to be better. I’m already writing a new record and I set the bar very high with the next record. We’ve got to out-do The Underdog on the next record. I think having the opportunity to work with Keith Stegall, just the idea of working with Keith makes you step up your game, it makes you want to work harder. Really I’m focusing on lyrics and melody and just writing the kind of songs that people can relate to. Just really pouring my heart and soul into every song. I’ve learned a lot, for instance, my Mom always said “you are who you hang out with” and I’ve really applied that to my songwriting. I really don’t listen to mainstream radio any more, I really am focusing on the great songwriters like Townes Van Zandt, Guy Clark, those kind of guys. I’m listening to the kind of music that’s going to make me a better artist, singer and songwriter. So, you know, I’m hanging out a lot with Guy Clark and Townes Van Zandt these days, listening to a lot of Willie and Waylon and Merle on my dads old vinyl records.

You had Willie Nelson perform on your album ‘The Honky Tonk Kid’ in 2004. That must have been some honour for you?

You’re known as a ‘Texas Country’ artist and sang about how you’d “rather be an old fence post in Texas than the King of Tennessee”. Do you feel that there is a big difference between the country music industry in Texas and Nashville?

Definitely. Nashville is the big machine and there are a lot of wonderful things about Nashville. We’ve got our booking agency and distribution company in Nashville – we have a lot of allies there but at the same time there’s a lot of difference between the type of business that is run in Texas versus Nashville. I’m an independent artist, I own my records, I own my merchandise, I own the bus! The band aren’t just hired guns, they’re like my brothers. It’s definitely more career orientated versus a trend or the current flavour of the week.

What do you think of the music currently being produced from Nashville?

The current Nashville sound still has some good stuff out there. Every once in a while someone comes out with a song and I’m like “hey, that’s a well crafted song”. Obviously as far as being an artist I probably have more in common with somebody like a Kacey Musgraves who does her own thing. She’s not shown a whole lot of love on mainstream radio and any time she puts out something I enjoy that but then there’s someone like Jana Kramer who is about as mainstream as it gets but I love her songs. So there are still well crafted and written songs out there but there’s also a lot of stuff that just sounds the same. It’s about the same kind of melody, same kind of drumbeats, the lyrical content is the same and really that’s the kind of stuff that the fans deserve better than. There are a lot of songs out there today that people won’t be listening to five years from now. There’s still a lot of people doing a lot of really really good stuff there in Nashville so at the end of the day it’s kind of like some people love The Beatles and some people love The Rolling Stones. Different strokes for different folks. I’d like to think that all those mainstream Nashville guys are just out there trying to make a living for their family like myself.

Have you found the crowds to be much different out here in England then to back home?

The crowds are great. I do feel that probably over in the States there are so many bands playing that I think our live shows are more rowdy where I feel the crowds here in the UK are a lot more proper and respectful. They clap during the songs and when the song is over they are giving you their undivided attention. It’s just been a ton of fun. We’re here because of the demand and there’s a lot of people here that are passionate about country music so I love being surrounded by people who love country music – I fit right in!

Absolutely! In the UK I don’t know how to describe it but I’ve kind of noticed that there’s a rebellious spirit and the fans really seem to like the fact that we’re doing something that’s different. We’re doing our own thing. There’s a huge amount of appreciation, the fans know that we’re not a mainstream country act, they know we’re from Texas and that we do things our way and I think that they just ‘get it’. It’s kind of the same thing that Willie and Waylon had going on and we’re honoured that we can just wave that flag.

I understand that the song ‘That Look’ was written for your wife and is arguably the song that kicked off the success of ‘The Underdog’. Do you think that it takes a song so personal to really connect with people?

I think so. As a fan when I listen to some of these guys sing songs I don’t really relate – the ones who have these Hollywood type lifestyles. I think I try to sing about real things that anybody can relate to. I think that’s why a lot of my songs about my family and my faith really make a connection with just ordinary folks. Really I’m just an ordinary guy who is no different than anyone else. I’m a dad and a husband just trying to make a buck.

Similarly ‘Bluebonnets’ is a song that really touches a nerve and one that other people who have experienced the same can use for strength. How important was it for you to write a song after suffering such a loss?

The idea came to me because, where my little girl Julia Grace is buried, in the Spring those bluebonnet flowers just bloom. They bloom so much if the temperature is right that it’s so thick you don’t even know it’s a cemetery. It just looks like a field of bluebonnets. If it gets above a certain temperature it’s almost like overnight they’re gone. It was an important song for me to write personally because I just wanted to write my little girl a song but it was also important for me to write because I want my music to have a positive influence on the listener and my fans. I wanted to show them how we’ve been able to turn our heartache into joy. I want them to know that “hey, you can get through this! Life is tough but you can get through this!”

The album title and the song ‘The Underdog’ are about keeping strong and pushing through when life isn’t handed to you on a plate. Do you feel that sums your career up?

You have a large family back home in Texas and also have been known to play over 150 shows a year. Is it hard to get the balance between work and home life?

It’s definitely always something we have to work at. I told my booking agent and manager “if I’m going to be gone for 10 or 11 days in Europe then when I get back home for the next couple of weeks things need to chill out”. February is a very light month. It’s just being respectful of the family but at the same time Dads have to work. It’s a constant juggling act, I think this year we’ve cut down to about 130 shows which means I get 235 days at home! When I’m home I’m home 24/7! I’m at my wife and kids beck and call. I do whatever they want, I’m there 110%.

Do you have any plans for the follow up to ‘The Underdog’?

Absolutely. I don’t know when I’m going back into the studio but I’ve been writing so much that I could go back in tomorrow and make another record. I’ve been writing a lot so my goal is to write the best record I’ve ever written and then write some more and more. I want to bring the best songs I’ve ever written to the table for this next one. I know I have my work cut out for me and I feel like we’ve now got a bullseye on our back now from the mainstream world. They greatly underestimated us and we definitely ambushed them with The Underdog! Now they’re watching us and my prediction is that when we come out with the next record I bet you one of the labels has one of their big big megastars put out a record on the same day! We’ve got our work cut out for us but it’s not about number one records it’s about putting out the best record that you can for your fans!