Gretchen Peters is an artist who has achieved it all. She’s won CMA awards, Grammy’s and also entered 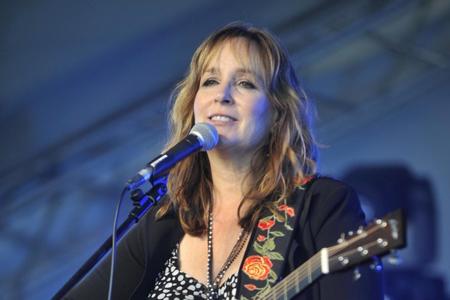 into the Nashville Songwriters Hall of Fame. Her latest full LP Blackbirds was met with huge critical acclaim and how now been followed up with The Essential Gretchen Peters. Gretchen hits the road in the UK this month to support the new release so we took some time to catch up with her beforehand.

Your 2015 Blackbirds has been a huge success for you. How proud are you of the record?

I’m very proud of it; it’s always great to have your work validated by the public at large; but it’s especially rewarding when you’ve been at it for 20 years, which I have.

It’s managed to be successful at a time where a lot of modern country is taking influence from hip hop and other genres. Is that particularly gratifying?

It is, and I think that because I was never really trend-aware, my career has sort of grown in its own separate ecosystem, if you will. Sometimes along the way it felt as if I were out of step, but in the long run the audience I’ve earned is there because of what I write and sing about, and they couldn’t care less about trends.

You’re someone who seems to be identified as much as a songwriter as an artist. Do you think that gives you a particular edge in producing records?

I don’t know if it gives me an edge as much as it gives me solid ground, creatively. If my musical inclinations or my production style changes from record to record, my songwriting is the bedrock. I always approach a record asking the same question; what will serve the songs?

Going back to the start of your career you wrote songs for Etta James and George Strait amongst others. Would that have been enough for you or did you always want to be the one on stage performing?

I never separated the writing from the performing from the recording. I grew up listening to singer-songwriters; that’s how I identify. I can’t imagine thinking of Paul Simon or Joni Mitchell (both big influences on me) in terms of “songwriter” vs. “artist”.

Is it fulfilling enough to hear another artist record one of your songs or did you feel you needed to record the songs yourself to feel satisfied?

They are quite different things. And the funny thing is, most of the time the songs I wanted to record weren’t the same ones that ended up being recorded by other artists. I am always flattered when an artist thinks enough of my song to record it. But the desire to make records was the thing that was always burning inside of me; it provided the impetus to write and tour. I love the art of record-making, always have.

You’ve just released The Essential Gretchen Peters. Why did it feel like the time to release a compilation such as that?

It’s been 20 years since the release of my debut album, The Secret of Life. The last retrospective I released came out before Hello Cruel World and Blackbirds, which were my 2 most successful records to date, and, I think, contained some of the best writing I’ve done. So it was time. The bonus for me was that I got to include a lot of things on the second disc that people have never heard – from demos to work tapes to live cuts to B-sides – things I was proud of or that were interesting or illuminating in relation to the album cuts on Disc 1.

You’ve tackled a couple of cover songs on the new release including songs by John Lennon and The Rolling Stones. Has British music always influenced you?

As an American kid growing up in the 70’s, how could it not??!! The Beatles and the Rolling Stones were in my DNA, as they are in almost all of us.

Are they songs that hold particular importance to you?

The John Lennon song “Love” was actually chosen for me by the producer of the tribute album from which it was taken. He’s an old friend who engineered my first record, and he really wanted to hear me singing that song. It was not an obvious choice but I love it and I’m so glad he had the idea. “Wild Horses” is really one of my favorite songs ever. Both the Gram Parsons and Rolling Stones versions are heartbreakingly beautiful. I love singing it, especially with Suzy and Matraca.

Can we still expect more new material in the future?

It’s probably inevitable. Although I do want to take an extended break after this tour. It’s been ten years of almost nonstop touring, and I’m not 25 any more.

You are just about to embark on a UK tour. How excited are you for that?

I’m really excited. We are playing some absolutely stunning venues, and I’m so looking forward to sharing the 20th Anniversary Tour with UK audiences, some of whom have been with me since 1996. When I’m touring a new album the set list is understandably weighted heavily towards the new songs; this gives me an opportunity to change things up, to go back into my catalog and play some songs we don’t get to do very much.

The likes of Bob Harris and other UK media outlets have always had a great appreciation of your music and shown you a lot of support. How important has the UK market been to you?

It has, and this is no understatement, kept me alive creatively at times. Through the late 90’s and early 2000’s, when my career was going nowhere in the US, the UK was always there, and there was always an audience for me. I can’t overstate my gratitude to them or to people like Bob and Terry Wogan for the support. To see these big crowds at our shows now, after 20 years of touring there – it brings me to tears sometimes. It’s really my home away from home.

There is a big boom at the moment in country music in the UK with our Country 2 Country festival in London. Have you felt the repercussions of this increase in popularity almost making country mainstream here?

From my point of view, I see much younger folks in the audience. This is, of course, a good thing. There will always be people who want to “preserve” country music; and the mainstreaming of country in the UK will probably bring with it all the arguments for and against things like pop-country and bro-country and what have you. I really try to stay out of that puddle of mud. I didn’t fit in 20 years ago and I don’t fit in now – and that’s the way I like it.

In 2014 you were inducted into the Nashville Songwriters Hall of Fame. How big an honour was that considering the esteemed company you have in there?

I don’t know if anything can top that night. To be acknowledged in such a public way, in a room full of hundreds of your peers was overwhelming. The fact that I wrote most of the songs that got me there by myself made it very meaningful, because for the most part none of them had a dog in that fight – they weren’t cowriters or songwriting buddies. It was such a pure act of validation by some very gifted people. I was also very grateful to have the Blackbirds album in the can; if I hadn’t had an album and a tour ahead of me I think I might have wondered if they were putting me out to pasture!

You can also add that to the Grammy and CMA awards you won for Independence Day. What’s been your favourite achievement?

I think it always comes back to the work. I feel a deep sense of satisfaction with the last few albums I’ve made. I think they prove that I’m still moving forward, that I’m not treading water, artistically. Awards are wonderful to get. But to be able to look back on my catalog of work, as I did when I was selecting tracks for The Essential, and say, these are some really good songs – that’s the thing that lasts, for me.

Lots of planes, trains and automobiles! After the UK tour I’m purposely keeping the calendar a bit sparse. A friend of mine recently said to me “you have to say no to some things to make space to say yes to others”. That’s going to be my mantra for 2016.