Atlantic as quick as he possibly could to follow up that show and also promote his latest record Wild Ones. This is the third time this year that we’ve had the chance to speak to Kip and he really is an artist who likes to devote as much time as possible to reaching out to his fans. We chatted backstage at The Academy before the Manchester date of his tour…

You’re here in the UK on your first headline tour. How is it going so far?

The tour has been amazing! I knew we had something special happen last year at C2C and just watching the way that people are reacting to the shows and the Wild Ones record it all makes sense now to me.

Did the show at C2C make you want to come straight back?

Yeah. I came back and immediately told my team that we had to get straight back over as soon as possible because something magical happened.

How have you found the crowds on this tour? As good as C2C?

Yeah. Honestly even stronger now that they’ve had time to live with the record. They were discovering me at C2C and now they know me.

Do you find the crowds here to be much different to America?

I get asked that question a lot. They’re just absorbed in different ways in every region and it doesn’t make one better than the other. People absorb music in a different way in different places. I will say that it’s been amazing that there is hardly anybody on their phones here! They absorb the show and they watch the entire thing. They’re glued on you which has been a blast. I love the rambunctiousness of the US crowds so it’s just different. I love Canadian fans, Australian fans, European fans, American fans, they’re great everywhere. I could go into detail and I tend not to because, I know you won’t be trying to spin the article, it ends up coming off wrong to people.

Yeah they just wouldn’t leave! They were just shouting out the back so I said “You know what? I’m just going to keep playing!” so I got out there right in the centre of it and rubbed elbows and played music for another 45 minutes before the cops made us leave!

Do you find that you’re playing any different songs over here?

I remember at C2C you played an Oasis cover with ‘Don’t Look Back In Anger’. Will we see that tonight?

I didn’t plan on it! It was fun last time. Do a lot of bands play that stuff around here?

You can’t go on a night out in Manchester without someone playing an Oasis tune in a bar! (Note: Kip did add the song to his setlist in London the next night!) Are you a fan of much British music?

Yeah. To be honest that record (Oasis ‘What’s the Story Morning Glory’) was a powerful record for me as a young teen. It had a profound impact on me. I remember hearing the melody and being blown away by it. I was also a huge Beatles fan. I love British bands!

Wild Ones was released last year. How have you found the reaction?

Up All Night had a lot more commercial success but Wild Ones has grown our fan base in a more powerful way. People sing the Up All Night record whereas people shout the Wild Ones record. There’s a difference.

It took forever. I never want to go through that process again. I went through a pretty deep depression for a while. I wouldn’t leave my house, I’d get off tour and shut all the blinds. I’m just now getting out of it because I had to finally face the depressive state that I hit but a lot of that carried for good music through that record. It was a tough record to make. It took forever for me to record it and get it right. I got in my own head and couldn’t get the sounds right. I finally did but it just took forever.

Do you think you were putting a lot of pressure on yourself?

Definitely. Knowing that the first record was a lot different to this record and people were going to be very judgmental about that.

It makes the whole journey not feel in vein.

Do you think it’ll be easier for the third album now that you know that you can just do your thing and be confident in it?

Are there any plans in place for it?

There are. I’m recording it right when I get back from Europe. I’ve got a whole body of work ready which is very eclectic. You’re going to hear a lot of Motown and Southern rock influences.

Yourself, Dierks Bentley and Dixie Chicks are all currently touring the UK. I remember last time we spoke you were talking about how big a risk it is to come over with the costs. Do you think the response of the crowds is proving it’s the right thing to do?

For sure! The crowds have treated us amazing with sold out shows. We definitely feel the love for what we are doing so we are definitely going to try to keep coming back and building it.

Since you last played C2C it’s expanded and grown. It must have been cool to be part of that?

It was. That was a tour that I will never forget. We got to see a lot and do a lot of touristy stuff which was fun and we haven’t got to do this time around.

Recording the new record, touring with Miranda Lambert in the Summer then doing our own headline tour in the fall hopefully around the new record.

Do you have any guilty pleasures when you come to the UK?

The fish and chips! I don’t eat that back in the States but I do here! That and Guinness!

Has the reaction from the UK fans exceeded your expectations?

I don’t know… I had pretty high expectations so they’ve matched them!

What’s your routine on a show day?

I usually try to find somewhere to go and workout because we eat a lot of bad food and drink a lot of alcohol so I try to get rid of that stuff every day! I also practice on guitar and write a lot. We write a lot during sound checks plus I’m usually doing a lot of press so there’s not a lot of time for me to get out and do a lot of stuff!

I just find a gym! I do all kinds of different things!

Are you planning on coming back to Europe for a larger tour?

One thousand percent! We’ll be back early next year for sure with a new album to show off! 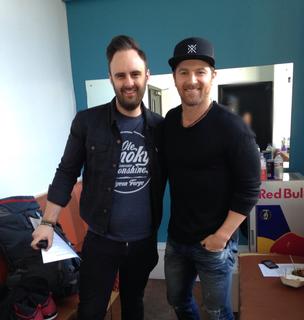 We’d like to thank Kip for taking the time to chat to us and for a great show that night in Manchester!