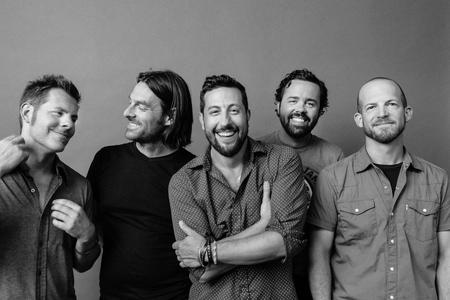 festival is becoming was finding out that Old Dominion were playing an after show party at the Brooklyn Bowl. Currently attracting huge attention in the States with their debut album Meat and Candy which spawned the number one single Break Up With Him and latest cut Snapback, as well as an ACM win for ‘Best New Group’, Old Dominion are one of the hottest acts in country music. The fact that an act going through such a meteoric rise wasn’t on the main stage seemed crazy. We were lucky enough to be the first people to interview Old Dominion when they touched down in London to talk about the record, their success and more.

Welcome to the UK! How excited are you to be playing your first shows over here?

Matt: Very! It’s going to be interesting to see how they take us!

Have you had much feedback from the album over here?

Matt: A little bit. We get some tweets and stuff here and there but it’s pretty much a mystery really.

What are you expecting from the crowds over here in the UK?

Trevor: The one exciting thing that we’ve heard from a few people is that since there’s not necessarily a country radio format over here most people will just get the album and listen to it. They wont necessarily be familiar with a couple of songs they’ll know most of the songs which is kind of exciting.

Matt: We’ve been told that it’s a very appreciative crowd and that any time country artists come over the crowd definitely wants to hear and it’s attentive which is great.

Well speaking to a lot of American acts they point out how British crowds love listening to the lyrics of a song. My favourite on the record is We Got It Right for that reason…

Matt: We love that. That’s definitely one of our favourites too.

Have you always wanted to head to this side of the pond?

Matt: Yeah. Any time we can spread out from what we are normally used to we will take it. This whole thing has kind of sky rocketed in the past year so we haven’t had a chance to even think about it. I know Brad has said a few times that we need to go overseas and when the opportunity came we took it.

The album Meat and Candy was released last year. Having already been together for years as a band how excited were you to finally get it out there?

Matt: It’s a nice little bit of validation for us to finally have something out there, which is now paying off for us!

Why did it take so long to get the record out?

Trevor: The band thing started to take off in the last few years but we’ve been together a long time as friends and playing music together. Relatively speaking it hasn’t been very long since we said “Hey, we’re a band and lets go after this as a band”. We spent a lot of time writing for other people and touring with other artists so it wasn’t like we were constantly trying to make this album. It all started materialising and we started to have hits as writers so everything started to come together. It was the perfect time and we had a good pile of songs to choose from.

You have a sound that is a little different to a lot of the music currently coming from Nashville. Do you think there is a general shift happening in the sound of country music?

Matt: There’s a general shift in country for sure but also in all music. We always talk about how people listen to music now on YouTube and streaming so there’s all different genres at your fingertips. Everyone can listen to anything and everyone pretty much does so it makes sense that they all start to bleed together a little bit.

Do you think it makes it easier for you that you’re all songwriters in your own right, having penned songs for the likes of Dierks Bentley, to be able to have all five members of the band bring ideas to the table?

Matt: I’m not sure if easy is the right word but we certainly don’t have the problem of finding songs. There are a lot of artists out there that really have to seek out their great songs, they’ve got to find them, and we don’t have that problem. We have been writing for so long that when it came time to make this album we had a lot of great songs and there are a lot of songs that we feel are great that didn’t make this album so hopefully they will at another time. Too many songs is a problem that we had which is fortunate for us and not always the case for other artists.

How long had most of these songs existed for before the album was released?

Matt: Some of them have been around for a long time and some are brand new. One of them we wrote, Song For Another Time, we wrote after we thought we were done with the album and we were back out on the road. We wrote that song and wanted on the album so we flew back home for a day just to record that song then went back out. Some of them are six, seven, eight years old.

How well was that received by the record label?

Trevor: There was a lot of like “They wanna do what?!” Which, to their credit, they’ve always said “Well, ok” and always let us do what we want to do and follow our vision. Until something completely doesn’t work they’re on board.

You’re getting a reputation for releasing videos for your songs which are a little more interesting than the usual with the Back to the Future themed video for break up with him. Where does the inspiration come from?

Matt: We were just all big fans of that movie and quoting it all the time. The director of the video was out on the road with us doing some behind the scenes footage and we were just talking about different things that we could do for that video and joking around about that movie which led to a light bulb moment about how that would actually fit the song.

You’ll be playing with Shane McAnally tomorrow at The Bluebird. I understand that he produced the album. How did that come about?

Matt: We’d known him for a long time as friends before either of us had any success. He’s just another one of the gang that we got to watch. He’s so incredibly talented and we’ve all learned from him so when it came time to pick a producer he was the one.

Trevor: That was almost like the light bulb moment too because we were such friends for so long that it just came up when we were talking about it. You would think that would be the first choice, you know, this guy is a great hit producer but we were just talking about different things we were going to do and thought “wait a minute, why don’t we talk to Shane? He’s sitting right in front of our face!” It was a great decision because he knows our personalities but knows our music too and has such a great vision.

Going back to the UK market. Do you have any plans to come over here for a full tour or is it just a case of seeing how things go this time?

Brad: See if they clap!

Matt: It’s just a matter of timing. We definitely would love to and, like Brad says, we’ll see if they clap first!

You have a show tonight at the C2C after party then your own headline show in London on Monday night. What can we expect to see from an Old Dominion live show?

Trevor: We love playing. We have a good time and there’s a lot of high energy. We feed off the crowd and it’s usually a sort of give and take. We’ll play the songs off the album and some of the hits that we’ve written for other people.

Are there currently any plans for the follow up to Meat and Candy?

Matt: We’re starting to bank songs a little and write new stuff. It’s very very early. We’ll probably start recording at the end of this year so right now it’s just a matter of writing songs and putting them in your pocket.

Matt: A lot of highway! Touring a lot. If you could go back twelve months to see where we were and the amount that we’ve grown it’s insane so the next twelve months seems to be on that trajectory too.

Trevor: We’ll be out with Kenny Chesney in the Summer 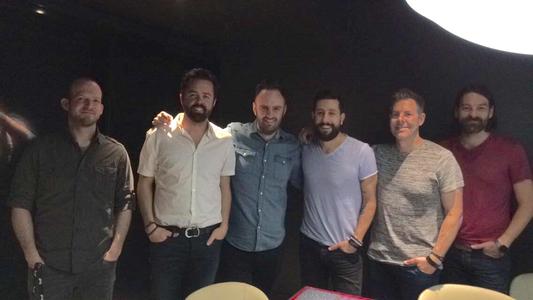