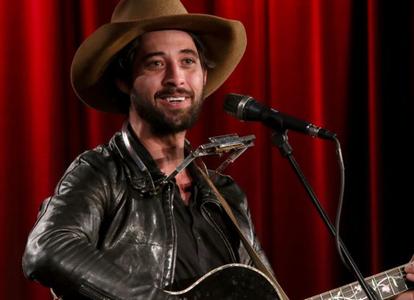 prior to the release of his fifth studio album Fear and Saturday Night. When we saw Ryan was bringing a full band back for a UK tour in October we made sure we were there! I sat down with Ryan backstage at Manchester’s Gorilla for a catch up before his show.

So, Ryan, you’re back in England for the second time this year. What made you want to come back?

I try to come over as much as I can. It’s a little bit more difficult to come over here financially and bring the band but I did a solo tour at the beginning of the year and it went really well. We got a lot of interest from promoters and fans to come back over and luckily enough the promoters were able to help us out and get us back over here with the whole band. We are always trying to come back – we’re just waiting to get the invitation!

Do you find the crowds over here to be different to America?

It’s interesting that you say that because the last few times we were here the crowds were different; a lot more reserved and very quiet – they were always respectful and seemed like they enjoyed the show. This tour for some reason it’s kind of all flipped and the crowds have been clapping their hands and singing along. They’ve been a lot more lively which has been interesting – we don’t really know what to expect!

Well the further north in the UK you go the more rowdy things will get!

It’s been like this all through Spain and Italy… Even Germany and they’re usually the most reserved! They don’t usually clap or anything! To have those guys get excited and partying during the week is awesome!

So are there any British bands that influence you?

Oh f*ck all of them! The Kinks, The Stones, The Faces are all just huge influences on me.

Moving on to the new record. How have you found the reaction to Fear and Saturday Night?

It’s pretty good so far. I know it didn’t reach a lot of folks over here when it first came out but it seems like the word of mouth has been pretty good and a lot of people at the shows have been singing along to the songs so that’s a good sign. You never know with trying out new songs if people have even heard them or even heard the old songs so you just have to try them out and see.

I was going to say, how difficult is it releasing an album and trying to reach a big audience. A lot of mainstream country stuff now is about a million miles from what you’re doing it must be difficult…

It is and that’s been a big battle over here for a long time in that the people representing us over here were the bigger label Universal kind of thing and we were just kind of lost… it was like “oh here’s another country singer!” kind of thing but that’s not what we’re about… the mainstream country thing. That probably hurt us a lot in the early years coming over here because people would think “Oh it’s a country band; I don’t wanna go hear that” and we have to try and show them that’s it’s different. I think now people know what to expect a little more when we come over. That’s what it seems like in the crowds like they’re anticipating certain songs and what we’re going to play. I don’t know whether it’s from stuff that people see on YouTube from the live shows in the States – maybe that helps out some but something’s happening!

I suppose The Weary Kind and Crazy Heart must have had two sides to it. It propelled you up but also you don’t want to become that guy…

Big time! People would come to the shows and expect to hear these songbird acoustic songs and I’d show up with a honky tonk rock ‘n’ roll band and people were a bit taken aback at the start! But I think it’s just something that needed to happen then the next go around some people would come back and bring their friends. That’s what seems like has happened. Maybe now it’s just the true fans who really enjoy coming to the shows and are not just there for one song.

I understand you’ve recently become a dad – congratulations! How have you found that?

It’s been great. It’s a life changing experience for sure!

How is it balancing being on the road and having a child?

My wife is great! It’s been pretty easy so far. We talk every day and she tells me what’s going on and how she’s changing. She’s only four and a half months old so she’s not really up doing much kicking around!

Has it changed your songwriting and influenced you at all?

Yeah I think it has a lot. I don’t know if having the kid or just maturing and growing up a little and putting personal issues aside. Growing out of my twenties and into my thirties things don’t bother me now like they used to…

I’m still waiting for that…

Just try to have fun! That’s the main thing. I’ve written a lot of sad songs but the new songs are all about having fun and getting to play. The band has been great.

Have you got any new material ready for a future release?

I don’t at the moment. I’ve been writing a bunch of stuff with the band and we are planning on recording a live album when we get back to the States and putting that out soon. After that we will start working on a new album.

Are there any artists at the moment that you’re listening to?

There’s a few guys in the States. There’s Sturgill Simpson who I really like and Jason Isbell who’s latest album is great. I like all kinds of music, I really enjoy Tame Impala and Kendrick Lamar. I listen to some Hip Hop stuff.

So finally what are your plans for the next year or so?

We’re going back to the States and have another tour planned for four or five weeks. We’ll hopefully get the live recording out of that tour. Then we’ll take some time off and start thinking about songs for a new album and just keep going really. Hopefully we’ll be back here in the summer. We already have some offers to play some festivals. I’d like to come back at least a couple of times a year.