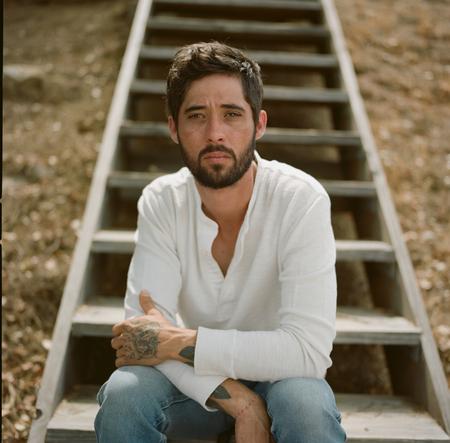 Ryan Bingham is the kind of guy that, thirty years ago, would probably have become a country legend. The unassuming Texan has lived the life of the real deal. He worked on the rodeo and lived in the back of his truck in his days before finding success with his debut album Mescalito and his whisky soaked voice tells the story of the hard times he has seen. Along the way he has also picked up an Oscar for his work on the song The Weary Kind from the Jeff Bridges led film Crazy Heart. This year Ryan has released his latest album Fear & Saturday Night and will be embarking on a UK tour later this year. He recently stopped for a chat with Six Shooter Country…

I think mostly it just reflects a different phase of my life. “Fear and Saturday Night” was pretty much recorded live with a band and Tomorrowland felt like it was more of an experiment. On both “Tomorrowland” and “Junky Star” I was going through a lot of difficult stuff personally and I think therefore both those albums turned out quite dark. These last couple of years have been a more positive time in my life and that’s reflected on this new album.

The music feels like it has an altogether more positive feel to it, we know that you went through a tough personal time around the last album, is this the sound of a page being turned?

I think so. Im definitely in a more positive state of mind with this album. And now that I’ve started playing the songs live I really feel how much more hopeful they are. I’m having a lot of fun with these tunes.

You went away to a secluded spot to write the album, is this a way of approaching the process that works best for you?

Yeah, I always need to be alone and away from distractions to write songs. There’s so much going on while traveling and touring and although some of the songs initially form while I’m on the road, I always need to step away and reflect on what I’ve experienced to really be able to sit down and write. For this album I rented an old airstream trailer on the top of a mountain in California and it was a great spot for me.

You don’t seem to have ever jumped on the Nashville country bandwagon. What are your thoughts on modern country coming from Music City?

Modern music coming out of Nashville is not really music that I listen to so I hesitate to form an opinion on it.

Could you imagine spending your time writing songs in an office for a living like a lot of songwriters do?

No, not really. I can’t really imagine myself spending much time in an office for anything. Songwriting has always been a very personal thing for me and I need experiences and solitude to write but definitely also an inspiring environment, which nature provides and which is usually as far away from an office space as you can get.

It feels like Fear and Saturday Night is a return to the sound of your first two albums, would you agree with this?

Yeah, I think it’s a trip back to the roots of where I started. I would agree with that. But at the same time it’s coming from where I am now so it’s back to my musical roots with a slightly different perspective I guess.

The title track feels like a more genuine and relatable take on the classic “drink a beer on a Friday night” country song. Is this something that you did intentionally?

It wasn’t anything intentional. The song doesn’t have anything to do with drinking beer or going out to party. It’s mostly a metaphor for confronting the challenges in life.

You’re well known for your Oscar win on the song The Weary Kind from the film Crazy Heart. Did that accolade push your career to a place you wanted it to go or were you ever worried that it might define you?

It definitely made more people aware of my music but it didn’t change everything over night. I still went back and made records and toured like I did before. There was a lot of pressure from many sides to kind of ‘cash in’ on it but I wrote that song specifically for that movie and I wasn’t going to now start making my own albums with songs just like it. So I guess I wasn’t really worried it would define me as I never planned to let that happen.

What was working with the legendary T Bone Burnett like?

T Bone is an amazing person to work with. He is very subtle and he’s a master at creating an inspiring atmosphere to work in. I enjoyed working with him a lot.

Congratulations on the announcement that you are expecting your first child. Has that changed your approach to music? Will we see your songwriting change? Less touring?

Thanks. The baby is not due until early summer. I’m not sure how the writing or touring will be affected just yet but I’m sure it will become more difficult to be away from home. I’m looking forward to this new chapter and I’m sure my wife and I will find a good way to balance touring with it.

We are preparing to welcome you back to England and Europe at the end of the year, how different do you find the audiences over here?

The fans in England and Europe are great. I guess in some places they are slightly more quiet during the show, which is really nice. Always very respectful and kind. I’m really looking forward to the tour.

Country is well on the rise in Europe, especially looking at some of the biggest names from Nashville heading to Country 2 Country festival, do you feel Americans will take seriously the music that we are producing?

I think so. I know that some of my all-time favorite bands like the Rolling Stones and Led Zeppelin came out of the UK. How can you not have huge respect for that? British music has influenced things tremendously.

Are more acts seeing Europe as a worthwhile place to tour?

I can’t really speak for anyone else but I’ve always wanted to tour in Europe. Part of playing music for me was the opportunity to travel and experience different countries and cultures and I feel I would be missing out in a big way if I could only tour in the US.

Where do you stand on the ‘Outlaw Country’ label? Is it really relevant or is it over used to describe anything that isn’t ‘pop country’?

When I hear Outlaw Country I think of Waylon Jennings and Willie Nelson. I haven’t heard anyone do something like they did in a long time. So I’m not sure there is a current style that could be placed in the same genre as Waylon and Willie. But there is a lot of good new music out there for sure. And the term ‘Country’ is difficult to use nowadays because it’s meaning has changed so drastically between that older style and current country out of Nashville.

Are there any up and coming acts that you’re excited about?

I really like the new albums by Father John Misty and Alabama Shakes. And I’m also looking forward to My Morning Jacket’s new album.

Outside of country what type of music influences you?

I listen to a lot of different styles of music. I’m inspired by a lot of the old Blues guys and by great rock n roll like the Stones and Zeppelin. Dylan of course. Anything that has a good groove and melody.