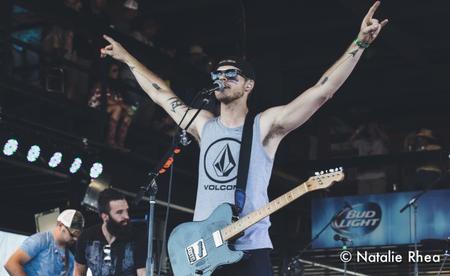 right in the right places with their music. I had that earlier this year when I was sent a copy of Sam Riggs sophomore album Breathless. Riggs introspective songwriting and pure, heartfelt lyrics resonated with me like no artist has in a long time (possibly even before). I was lucky enough to get to speak to Sam on the phone recently to talk about his writing style, Breathless and more…

You’ve just released your second album, Breathless, how have you found the early reaction to the record?

Well, man, it’s been incredible actually! I guess tomorrow will be two weeks since it came out and it’s been incredible. The last record did really well but breathless has just come out like a bullet like a gun. Everything is moving in fast forward but it’s quite nice!

The album dropped in 3rd in the Billboard country chart behind Chris Stapleton and Sam Hunt. That’s quite something!

Absolutely. We were number one on the heat seekers chart on Billboard. It’s taken off and it’s really been incredible.

Was it a big surprise to you how successful it’s been early on?

I think every artist has a certain level of apprehension and nervousness about how people are going to receive music – especially music that’s maybe a little more edgy than they’ve done before. I was a little nervous but people have just gone crazy about it, which is a great feeling. It’s like “ok, I wasn’t wrong after all!” I think it’s easy to lose track over time of why you really started and where you really want to go with it. It’s sort of a litmus test to see what people think.

Your debut record Outrun The Sun was a big hit for you and gained a lot of praise. Did that add to the pressure for this record?

There was a level of pressure which for a long time affected me. I was, for a long time, writing in the shadow of the biggest thing I’d ever done which was Outrun The Sun and that record still stands quite well on it’s own. I had a hard time writing the songs for Breathless at first before I really realised that I wasn’t trying to top Outrun The Sun and I just wanted to do something different then that really helped to develop the mind set I needed for writing Breathless.

Where did the inspiration behind the songs come from?

All kinds of things really but there is a major theme through the record which is addiction. I wouldn’t call myself an addict but I do constantly seek out some sort of stimulant. Whether it’s physical or emotional there is always something that I’m looking for to take it to the next level. We could all name all sorts of things but at the end of the day everybody has their vices. That was a common theme for the record and there’s also the theme of growth. The Lucky Ones was about growing up poor and having to make something of yourself then there’s Gravity which is about that moment in your life that we all realise we want something bigger. It’s about that time between when you realise that you want something bigger and when you can actually go out and get it.

Listening to a song like ‘Second Hand Smoke’ I can hear a really raw and personal side to your song writing. I think it’s a song that it’s so relatable and truly is one of the most personal songs I’ve heard in years…

Thank you so much. That was a tough one to write. There’s a lot of honesty in that song that I really had to come to terms with in writing it. There’s a level of sort of broken down soul bearing in that song. They always say there’s freedom in the truth and you don’t really realise how true that statement is until you’re speaking the truth in a song for everyone to hear. I was singing that song in the studio and it was like “Here it is. This is the truth. There’s no sparkle or shine it’s just… I have a problem with addiction.” (laughs)

Would you say that most of the music you write is personal to you?

Absolutely. Some more than others. I would say that you can really hear it when it’s 100% about something that I’ve dealt with. There’s a song on there called Burn Me Down which doesn’t necessarily relate to me 100% but it’s something we’ve all dealt with, being kind of screwed over by somebody, but it’s got that groove and vibe to it. When we were writing that song we were kind of channelling a little bit of a Bruno Mars/Michael Jackson sort of thing.

Going back a bit I understand you’re from Florida originally. What made you choose Texas as your new home?

I just wanted to chase down music. Where I was growing up in Florida there wasn’t much of a music scene for me. At the time the days of Vince Gill and Alan Jackson had just gone so I was searching for something real like that again and I heard some music come out of Texas so I thought “that’s truth. Those are real lyrics” so I just packed up my stuff and sold what I couldn’t pack and left.

Did the lure of Nashville ever appeal?

I’ve worked a lot of Nashville but it’s not really the best time for me because I’m just so in love with Texas. It’s a big place and it’s kind of the land of milk and honey for me. I love going to Nashville and working there but I’m definitely glad that I started in Texas because it really helped me to hone my craft unquestioned. Nobody was trying to sell my anything or get me to do anything. I had to pull myself up by my boot straps which is sort of the mentality out here. Going to Nashville, knowing what you want to do and having an open mind to new ideas is, you know, I wouldn’t have been as successful there.

Who would you say are your biggest influences musically?

Older 90’s country and 80’s country. I’m a big Garth Brooks fan and a big Paul Simon fan. The Graceland album was kind of the soundtrack to my childhood. Real songwriter stuff. I’m also a fan of some hip hop like Yellow Wolf and things like that.

You used Kickstarter to help get the record off the ground. How did you find the support you received on there?

It was tough for me to use Kickstarter. I have a really honest issue with asking for money. My good friend Jason spun it to my differently and said it’s giving people a chance to be a part of your life in a way that they wouldn’t be able to before. Then I realised that for every dollar they give then they are getting something back – it’s not like an investment record label type of thing. It’s a peoples label (Sam’s label Deep Creek Records) and so in that they don’t expect your first one signed they just expect you to put out a great record and come through artistically so that opened it up for me. I did the Kickstarter and we raised a little over thirty thousand dollars which allowed me to repay some of the money that I’d borrowed to make the record and also allowed us to promote the record in a way that it deserved to be.

The album is released on your own label, Deep Creek Records, what made you want to go in that direction as an independent artist?

I think labels work for some people and not for others. For me, I don’t want to say I don’t bring enough to the table, but as of right now we have crowds anywhere for 200 to 1200 people and when we get into the tens of thousands then I will be able to go to the table at a record label and say “hey, this is me and this is what I do. If you want to be a part of this then let’s talk”. I don’t know that they will ever come because being independent and owning your own label is sort of the best of both worlds. It allows you to keep your honesty as an artist and nobody is taking tens of thousands of dollars from you – you get to put it all back into your own music. It just takes perseverance and guts to start.

Absolutely! And there are labels out there, like Broken Bow Records, they’re 100% an indie label and let the artist do what they want to do. That’s great but they’re not all like that.

Over here in the UK we are seeing a huge rise in the popularity of country music. Do you know much about the following of country over here?

I have actually heard a lot from UK fans on the release of Breathless. We’ve played France once before and that’s the furthest we’ve gotten over that way but we want to get over. I want to play the UK more than anything! We’ve had like three or four meetings about it so I really want to get over there.

I have to admit that I hadn’t heard your music until I had the album sent over but, for me, it’s one of the best that I’ve heard this year. It just needs people to hear it!

For someone like yourself, an honest and raw songwriter, our audiences tend to have a real appreciation and hang on to every lyric – amongst others Kacey Musgraves has said she almost prefers our audience for that reason. Is that something that excites you?

It is! I’ve heard a lot of that and actually witnessed a lot of it. UK fans have a deep respect for the lyrics and artistry of what we do. That’s something that, as an artist, I crave that connection with people so I look forward to experiencing that first hand.

We’re in the middle the Breathless tour right now and we’re in the middle of building this thing up to be the best machine in terms of touring that it can be. We’ve got a few tours out of state and hopefully across the pond to you before the end of the year. We’re just looking at anything and everything right now and playing shows, pushing the record and meeting as many fans as we can!