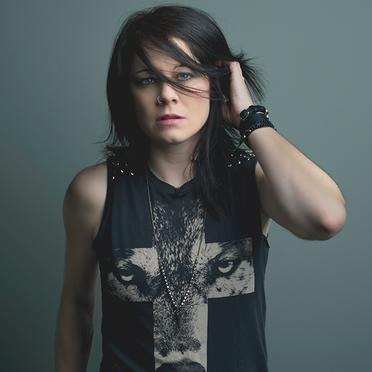 Pass The Jar: Live From The Fabulous Fox Theatre. When I heard Sonia was playing the pop-up stages at this years Country 2 Country festival I was shocked, excited and elated. For me she is one of the great country acts of the moment and certainly up there with the best songwriters. Sonia is about to head out on the ‘Mind The Gap’ UK tour with our very own Sasha McVeigh and we are thrilled that we had the opportunity to catch up for a chat with her.

You are about to embark on UK tour with Sasha McVeigh, how excited are you?

I am extremely excited to tour the UK for my very first time! Iam pleased to get to travel with Sasha because I love her to pieces and think she is a real go getter! I can’t wait to create memories on the road and write some music with her!

Is this your first UK tour?

Yes! It has been a dream of mine for ages!

How did you manage to get involved in a tour with Sasha?

We met through a mutual friend of mine in Nashville, I invited Sasha to come and play a song at my songwriters round and we just hit it off. She asked me if I would like to come to the UK and co headline with her. I jumped at the chance!

You performed at the Country 2 Country festival in London in March, how did you find that experience?

For me it was great! I was really impressed with the turn out at my shows and how well I was received! I am really excited that country music is gaining some traction her in the UK.

Did you realise how big the following for country in the UK and Europe was beforehand?

I did not realize the hunger for country here. I heard it was not well received her but well C2C proved all the nay sayers wrong didn’t it?

How have you ended up focusing a lot of attention on coming to the UK? Is it something you’d always planned?

I have put every cent I have into coming to the UK and creating a presence here.  I love the UK and how open minded it is here musically. Some people back home think I am crazy to focus so much attention, but I know it is worth it.  I don’t listen to negativity, I have always felt in my heart this was the place to go and so I follow my heart. I am blazing my own path and everyone here has been so wonderful to me! i have had a tremendous reaction to my music so i think I am where I am supposed to be.

We first heard your name watching the Zac Brown Band DVD Pass The Jar, did that have a big effect on your career being put in the spot light that way?

I toured with Zac Brown intensely for  many years, I was the first artist he signed to his label Southern Ground Records. The label disassembled last year but my experience touring and writing with him was something I would never trade or take back. It was very impactful to my career and to me personally.

You’ve written a couple of huge singles for Zac Brown Band including “Goodbye In Her Eyes “and “Sweet Annie”, are you still involved with the band?

I have not been able to write lately with them but I am extremely proud to be a part of those songs. They have changed a lot of lives and both went #1 on his Grammy Award winning record “Uncaged”.


Does their meteoric rise to superstardom give country acts who aren’t as mainstream or ‘radio friendly’ as some a big shot in the arm?

I think Zac Brown Band changed the game in country music because he gained attention through grass roots. I was touring and opening for Zac Brown Band before their mainstream success. While it may seem to the public eye some sort of “Meteoric rise”  there was no quick way to the top for them. They busted their asses for many many years, they were turned down by label after label, but continued to work hard and gain fans and then the record industry could not ignore the numbers anymore. So I think what Zac Brown Band did was prove that the industry doesn’t always know what is good music. They have inspired people to do it independently  and to not accept no for an answer. I have tremendous respect for their rise to the top and I am proud of them. I remember 6 of us sharing a two bed hotel room and the band sleeping on the floor sometimes. They are incredible musicians. writers, and friends and they deserve every bit of their success because they worked damn hard to get it.

Do you find as much satisfaction in writing a song that’s successful for another act as you do the music you release?

I think I just want the music to be heard, as long as the song is heard I don’t really care if it is through me or someone else.  music should always have a chance to reach someone if it is good.

You were initially signed up to Zac Brown’s ‘Southern Ground’ label, did Zac give you a lot of support when you were trying to make it?

Zac really did give me loads of support he put me in front of his fans, his radio team jumped on board as well as his management and booking agent.  He shared his stage with me and really was good to me. I am eternally grateful to him and will always respect what he tried to do for music with his label Southern Ground Records. I regret that the label didn’t take off but I don’t think you’ve seen the last of him in that aspect. He is not the kind of guy to just roll over, he comes back harder and stronger.

You’ve shared the stage and opened up for some huge acts in your time. Do you have any that you still keep in touch with?

I keep in touch with just about everyone I have toured with on some level. I really became close with the band Uncle Kracker and we text all the time.  I am great friends with Brantley Gilbert and his band as well. Kenny Chesney and I sometimes touch base, as well as Billy Currington. That is the best part of the music industry creating a circle of friends and traveling the world with them. It’s hard work but it’s a blast as well!

Who has been the best in helping advise and support you in your career?

I don’t make a move in my career without my best friend/lawyer/confidant Jim Zumwalt or my mentor Dean Dillon. I think the most important thing throughout my career is taking advice from people who I admire,respect, and who have had success in their field. Leslie Fram (CMT) and her husband Lanny West have been great mentors for me for many years along with my friend Meri who stays behind the scenes. She is the one who really gets to hear all the
crazy in my head. ha!

Who have been the biggest influences in your music?

Are there any current acts that you are listening to a lot?

How about any upcoming records you are excited for or recent releases that you’ve enjoyed?

Brooke Eden is about to release her freshman record and she happens to be my best friend as well and so I have gotten to hear whats coming. It’s gonna blow the doors off country music. I really love Brandy Clark and what she is doing as well.  I have been listening non stop to Ella Henderson as well I LOVE HER record top to bottom!

Back to British country. Have you heard many of the current acts coming from the UK?

Yes I adore the Worry Dolls who I just wrote a song with on easter sunday and had a really really good time writing with them.  I look forward to hearing their next record.  I really love those girls Ward Thomas, we got to write a song together as well and just and a blast! I am rooting for Janine Barry, she’s due to record a record in Nashville this year so I am excited for her!  I am sure there are more acts that I have not had a chance to hear . I think Ward Thomas and The Shires are being pushed and marketed (good for them!) so they are kind of the obvious picks because of all their success here. I look forward to hearing more UK country artists on my UK tour with Sasha McVeigh. Of course I love Sasha as well xx. (duh) she’s a star.

Do you feel it is much different for UK acts in writing and performing country?

For example, it probably wouldn’t sound right for us to be singing about specifically American subjects. I was discussing this with the Worry Dolls the other day at our co write. I think that if UK Country acts steer away from “trying too hard” to be country and just write a good song, it will all be ok. Don’t write about what you don’t know. As long as you write what is in your heart and stay true to yourself you can’t go wrong. Some of the UK terms/slang will go over some American Country listeners heads, but personally I think its cool to put a little UK twist in there, no one wants to hear whats already been done, boring, do something new and original that will turn heads!

Write write write, tour tour tour, record record record! 🙂 maybe sleep a little if there is time! I am looking forward to playing the Key West BMI songwriters festival in May and the CMA festival in Nashville in June. I am excited to release 2 songs here in the Uk When We Are Alone and Put It In Your Pocket. In the USA I will be releasing the anticipated single Booty Call in May as well! I have my hands full for sure!

Sonia is currently on the road on her UK tour with Sasha McVeigh (details below). Her singles When We Are Alone and Put It In Your Pocket are both available on iTunes UK 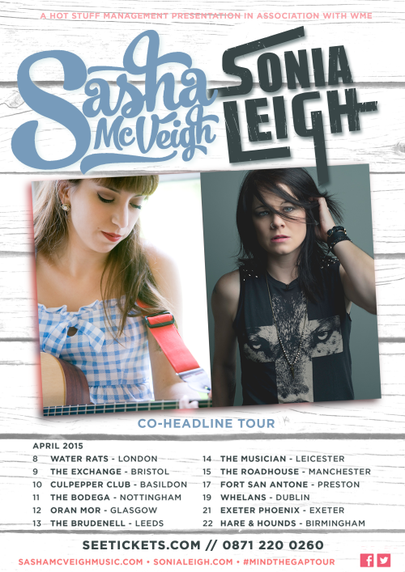