C2C 2016 was a whistle stop tour for Darren Hodson and his band The Southern Companion. Having played a support 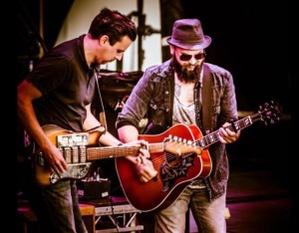 show for Lulu in Cumbria the night before and playing in Grantham the night after the band managed to fit in a rousing set on the Big Entrance stage on Friday afternoon. We managed to grab fifteen minutes for a chat with Darren before he shot back off up north…

Welcome to C2C. Is this your first year playing the festival?

It is. I’m actually right in the middle of a tour with Lulu so I literally have to leg it back up north tonight to get ready for the show tomorrow! Unfortunately we could only squeeze one set in, I was hoping to maybe do something Saturday morning but by the time we had timings for the tour it was too late.

How excited are you to be part of the biggest date on the British country music calendar?

It’s great! I think the first one must have slipped under the radar a little because I didn’t know about that one but I’ve been thinking it’d be nice to get on and do it for the last couple of years. It all came together this year with the new album out and Sonnet on board. I wish I could stay if I’m honest even just as a punter because it’d be a lovely busman’s holiday. I’m gutted to miss Chris Stapleton – I think he’s going to own this thing!

The British country music scene is thriving at the moment. How special does it feel to be part of that?

We’re just kind of getting going really. I’ve been a musician for a long long time and there’s been no scene for what I play. It’s actually caught me by surprise, I was thinking that this Southern Companion thing was just a bit of fun and a passion project because there’s nowhere in the UK to do it, we all making a living playing music for other people and this was just fun. Gradually, without even realising it and making records for our own pleasure, suddenly we find out that there is this scene bubbling up. It’s very exciting to know that there is a market out there for stuff that we’ve all been championing in our own way for a while with nobody to play to. Maybe there is now! I think in the UK we’ve been starved of honest, genuine songwriting by the mainstream media and people are starting to see through that TV talent show, radio playlist pop because they’re craving something genuine. I think that’s why the Chris Stapleton thing has happened. He suddenly comes out of nowhere, apparently, at the CMAs, sings his arse off, plays his way and people are like “holy moly where did that come from?!” and overnight he sells like a hundred million records.

What are your main influences musically?

As a band our influences are pretty varied but all rooted in that Americana, roots, country, rock, blues, soul. That whole big blending up of those great American traditional genres all rolled into one. I’ll tend to come up with a song on the acoustic, take it to the band as very much a singer-songwriter thing and because of the stuff they’ve played over the years their natural instincts are so in tune with what I hear in my head any way and that’s why we have the chemistry that we do. We all have a varied but relevant record collection.

I read somewhere you were referred to as ‘The British Zac Brown’. What are your thoughts on that?

I don’t know where that came from! I think it’s because I’ve got a beard, no hair and maybe I’m a bit tubby! That’s probably where it ends! It’s very very flattering though and if that’s what people say I’ll run with it.

You played as a sideman in various bands for years. What made you finally want to go it alone?

It’s been more kind of as a band member but never really the guy at the front who is singing and writing most of the songs. All of the other projects I’ve been in over the years I’ve been part of the writing but usually with someone who’s maybe more of a front man. Inevitably they never quite gelled and Southern Companion came about in maybe 2010 when I was in a band that was grinding to a holt. I ended up with a bunch of songs that I’d never used anywhere else as every time I brought them to a band there was a feeling that it was to ‘me’ and not fitting with the band. I had a load of songs that were really badly recorded demos and I just suddenly found myself without anything to do and a few of the guys that I’d been playing with in various different things we decided to get in and record those songs so that I had a nice version of them down somewhere. That’s kind of what made up the first album. Once we’d finished that we thought ‘lets go and gig it’ and see what happens. It started to grow very slowly from there. We’d play a few of my songs and a handful of covers and it kind of grew into the second album. It’s just been a very gradual and organic thing that I fell into.

You’re currently in the middle of a UK tour with Lulu. How did that come about?

The guy who plays guitar in Southern Companion, Simon Johnson, was doing the Lulu gig but got asked to do a few shows last year so he put me forward to cover for him on guitar. He’s now playing with Tom Jones in Australia, which classed with Lulu so I’m now doing Lulu’s band full time. It kind of came about when I was playing with that band and they asked what else I do so I played them a few songs off the album and Lulu and her brother, who is very much involved with her team, really liked them and suggested having me as the opening act as well.

Your second album 1000 Days of Rain was released earlier this year. How have you found the reaction to it?

So far we’ve had some really great reviews. With any new act just getting it heard is the hardest thing so it’s been a bit of a slow burner. Touch wood we haven’t received any bad ones yet. It was a funny little record that we went in and made just for the love of making records really and then tentatively started passing around. We are really pleased.

Where does your song writing inspiration come from?

There are hundreds of songwriters. I’m just a big fan of songs and great song writing. The reason you tend to be drawn to that Americana and country genre is because that’s where you find the most honest songs and stories. I love story songs. I think my favourite songwriter at the moment is Jason Isbell. I’ve loved him since he was in Drive By Truckers. He’s now getting the recognition he deserves and I think he’s probably the best songwriter of my generation I just love the way he writes. You have to be somewhat careful because if you listen to too much of someone you end up subconsciously trying to mimic them. Ryan Adams has always been up there for me too.

Do you have any plans for a solo tour after the Lulu tour?

I’d love to. We are just trying to sort that now and put all of the logistics together. It’s very very hard to bankroll a tour unless you’ve got a backer. We are trying to get the band out on the road even if it’s just for a couple of weeks or ten days trying to hit a few places and spread things out.

Will you be heading to any of the festivals this year?

Yeah we have a few. I can’t remember how many we are allowed to announce… Definitely Fort San Antone but not the others!

This tour with Lulu finishes at the end of April then there’s a run of festivals in the Summer and I’m hoping that by August/September I’ll have the new record written and then to try and scrape some money together to get back in the studio. At the moment we just want to get out and play. I love writing and Iove recording but there’s nothing like getting out and playing shows for me. Whether that is solo, which I love going because it’s so intimate, but equally getting on stage with those four other guys is amazing. That’s the immediate plan any way!