Toby Keith has become one of the trusted old guard of country music in the last decade. With the large numbers of young 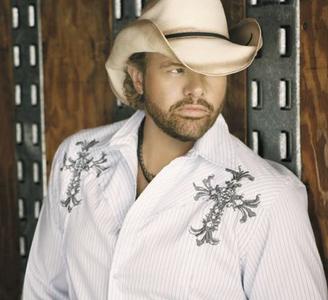 artists hitting the airwaves Toby has found himself one of the experienced heads on the block. Having just released his eighteenth studio album, 35mph Town, and just wrapped up the huge Good Times and Pickup Lines US tour we managed to catch up with Toby for a chat…

You’ve recently released your eighteenth studio album in 35mph Town. How’s it been received? Has it gone down well?

Yeah. Albums don’t do what albums used to do. We were more in the fashion of releasing the album then pulling singles from the album whereas now you release singles then put the album out hoping that people will but the entire product. It’s just a different animal.

Yeah, you seem to see a lot who release a single then you don’t see an album for sometimes over a year…

So with it being album number eighteen do you find it hard to keep it fresh?

No. I found out early on that, you know, I showed up in town and had my first album ready to go which I had my whole life to work on. I was out there enjoying my success and getting to play in front of people that knew my songs and people were recognizing my face and name then I get to about the third single and it’s going up the charts then one of the record execs says we are going to pull one more single off this album then we are coming with a new album. I was like ‘uh oh, I don’t have another album!’ and I had to really go to work! So I have never quit writing since that day and I’m so far ahead that I could release another one right now. So it’s not hard to keep it rolling or fresh, I’m always looking for ideas and I probably do some kind of writing every day.

So where did the inspiration behind this album come from?

There’s no inspiration. The way I do things is that I write all year then go in in the Spring and I start pulling up all the stuff that I’ve written. I start looking at it and I say ‘looking back what are the best ten or twelve things that I did?’ and I go in and record then that’s my album. So it’s just a songwriter’s album.

The title track 35mph Town seems to hint at noticing the changes taking place in society. Do you think your perspective has changed a lot over the years when it comes to songwriting?

I think I got better! I think I still use the same mental system as far as structuring songs. I feel like I might write some songs that aren’t as good as others but I don’t think I ever write a bad song. If it’s completed then it’s going to be written right so I feel like I’m only a great idea away from a great song.

The lead single Drunk Americans did relatively well in the airplay charts. Is it becoming harder now to make an impact with a song?

It makes it difficult when you sound a little more country and you’re more old guard. I mean the ‘bro country’ thing, the hip-hop stuff, I wouldn’t even know how to write that stuff. Everybody is going to be creative and do their own thing and I’m fine with that but I’m not going to change doing what I do.

It seems to have evolved now to a stage where there are less songwriters now performing their own songs. People seem to be writing songs for the singers more so than people like yourselves who have always written for yourself. What are your thoughts on the current state of country music?

I think it’s just evolving and doing its thing. I mean, yes, country music as we know it is maybe going to split off and do it’s own thing. They’re just two different genres. What’s taking the market share up now is not what was taking it up ten or twenty years a go. There are so many different ways of getting your music heard, if you listen to satellite radio they have all the channels that play ‘here’s what today, here’s what’s yesterday, here’s what was before that, you know, here’s Willies Roadhouse’ so it’s just a different world. It’s an explosion of the digital age and it is what it is but it’s very difficult for someone with a country song to go compete in that current market. You’re always going to have fans out there so I just play it for my fans.

There’s enough people that love what you do that it doesn’t really matter I suppose to a degree. Are there any new acts that are getting you excited?

You know I’ve had several of them like Chris Janson and Brantley Gilbert, some of those guys, Colt Ford, I’ve had a bunch of the new cats opening tours for me over the last few years. They make great music and are passionate about what they do. They’re good people and that’s why I say everybody’s got to make a living and I’ve been very blessed so I wont hammer anybody. I’m just not going to adapt to that kind of music – that doesn’t do it for me.

So you’ve visited the UK a few times in the past on tour. Do you have any plans to return?

We’ve talked about it. Maybe as early as 2016. The two tours I did over there were brilliant – I loved them. I really appreciated the way that you go from town to town and change your set list every night because they weren’t under the rule of the way Americans deliver their music. If I was in one town they would want to hear an album cut and they’d played it so much that it was famous there like a single but it wasn’t a single in the States. So they would say ‘tonight we want this song, tomorrow night we want this’ and I would adapt my set every night to fit those different needs but it was neat for me to play those songs and listen to somebody else sing along to them.

Did you find the crowds to be much different over here?

You know what? When I played London they said it was the first time they’d seen anybody stand for the show. They said usually people sit and are more reserved but they stood for me. They did just what they’d do any other night. There were a few places where they were a little more reserved but as a songwriter I can appreciate that. I’d rather have them sitting and listening than standing and not paying attention.

Country music is really on the rise over here at the moment but you were here almost before that started. Have you always seen the value of visiting Europe and taking country out of America?

As far as I’m concerned I’ve supported moving around and playing as much as possible over there from the start. You just never know how much coverage you can do until you go once and see. After we did the first one I knew that I’d be willing to come back a second time. Same as when I went to Australia I didn’t know what to expect and the crowds were great. It’s a big undertaking to get as many people as it takes from me to do a show and go out and do that and get everybody all over the world but I really enjoy it.

Obviously crowds worldwide are reeling as the moment from the recent attacks in Paris. Brantley Gilbert even postponed his European tour. Will you ever let that kind of thing affect you or do you think the best thing to do is get out there and show them we wont bow down to that kind of thing?

You have to go and work. With each one of those things that passes and happens the security keeps getting tighter and tighter. You’re always going to have a lone wolf out there that pushes together something, gets through the cracks and creates that kind of evil but you can’t just shut yourself in. You have to get out and live.

As you mentioned before you’ve toured with the likes of Kip Moore, Eli Young and recently Chris Janson. Do you think it’s important to pass on the knowledge to those kinds of guys?

Yeah, if they’ll listen! Those guys are good guys and they all sought advice at one time or another. I could save them a lot of time on things but then there are other acts that know it all already. My father didn’t know anything until I was thirty!

You’ve recently wrapped up the Good Times and Pick Up Lines tour. How was that?

It was great. It was a big tour. I actually worked a few more shows than I have been because my son played high school football for three or four years before going to college. Friday nights he was on the football field and so I was flying back every Friday night to watch him play football and then right back out. This year he went to college so I didn’t have to do the Friday night thing so actually we worked a few more shows this year than I have been. It’s always fun to get out there and blow it up.

Do you think you’ll ever get tired of being on the road?

I don’t. The second that I’m having a bad day or something, it gets to show time and I put my boots on and walk out there, get my guitar it all goes away. It’s like I’ve got a job to do and these people are here to have fun and I’m not going to stand in the way of that.

So what are your plans for the next twelve months?

I’m going to do some down time now. We literally just finished the tour last weekend so we’re going to enjoy some winter down time, fish a little bit and travel some. Just enjoy life a little bit. I’ll probably hit the studio in about March and start work on some new project before I start touring in June again. It’s going to be a nice period of R&R.