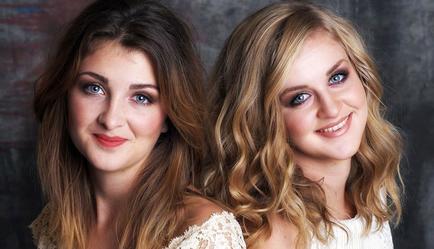 do tick both those boxes! The last twelve months has seen a co-headline tour with The Shires, a debut album,a slot in the main arena at C2C and plenty of time in Nashville! As this article is published the twin sisters are currently on a European tour but were kind enough to give us some time for a catch up…

Tell us a little about how you got started in country music?

Catherine: When we were about 11 our Cousin Libby from Canada came over to stay with us and she brought a long a lot of the music she was listening too. this included music like The Dixie Chicks, after we heard their harmonies and songs we were sold! We grew up singing in a choir at school, and me being the alto and Lizzy being the soprano we learned to harmonise. So we began starting to sing country in harmony and then when we started writing in our sixth form school.

Lizzy: We are  influenced by loads of people but the main people would probably be  The Dixie Chicks, Kacey Musgraves, Miranda Lambert and Fleetwood Mac!

Obviously you are twins. Is that always a good thing spending so much time together on the road and in the studio? Or could you become the Gallagher’s of country music?! (joking of course!)

Catherine: Haha no no! The being together thing all the time works very well for us!! We are very used to each others company so i think the twin thing is a good thing for life on the road!

When you are song writing do you find it easier to be honest and frank with each other considering you’re sisters and have that bond?

Lizzy: Definitely! Being sisters is a huge advantage for us as we understand how each of our brains work! So when I have an idea of what to say in a verse or chorus that may not make complete sense Catherine can translate for me! Haha a Twin thing i guess! And if either of us have an idea that the other doesn’t get or like we are more than happy to tell each other. I think that is is one of those creative processes that everyone in the room writing has to like each part of the song and as writer we love to write with called Jess Sharman would say “it is important to leave your ego at the door”.

Are there any times where the two of you do fall out over music?

Lizzy: We fall out over many things, normally the arguments only list 10 minutes and we are back to normal, although we haven’t ever fallen out over music before.

Along with The Shires you seem to be leading the way in the current influx of UK country acts, just how exciting has the last year been?

Catherine: This last year has been insane!! We have been able to see some amazing places and do some really cool things and we are so lucky that it has happened this way. We are so excited about the country music scene that is growing at the moment with The Shires having such a great year too it really shows that the UK is ready for country music!
What have been your personal highlights?

Lizzy: This tour we did in March had loads of personal Highlights for us, but I think performing on The Satalite Stage in The O2 Arena was a highlight for the both of us!

Are there any other UK based acts that you are really enjoying at the moment?

Catherine: Yes! We are big fans of Laura Oakes, and Jess Roberts, and Frankie Davies, all who have really amazing music and unique sounds! But there are also so many that are coming up with an amazing UK country sound, Dexeter as well!

How about the US based acts?

Lizzy: John and Jacob from The US who just went on tour with The Shires and who have toured with Kacey Musgraves a few times are really coming up. As well as Miranda Lambert and her Platinum album.

You performed on the Satellite Stage in the main arena at this years C2C festival. Just how did that feel stepping onstage?

Catherine: It was a absolutely INSANE!! It didn’t quite hit us until we turned up the lights and saw the audience and we both got very shaky!! Definitely a pinch me moment and something we won’t forget.

You jokingly said “Hello O2 Arena!” that night and talked about how exciting a moment it was. Do you feel like the British acts will start to move onto the main stage at the festival?

The whole crowd felt the buzz from your excitement that night which is something that seems to happen at most of your gigs – you just look like you’re having the times of your lives every night. Do you think it’s important to really show the audience that you’re having a good time?

Catherine: Very much so! When we do a show, the Energy from the audience is a massive part of the show and I think we feed off each other! We want everyone in the audience to be having as much fun as we are!

You’ve spent a lot of time in Nashville. How have you found the Music City experience?

Catherine: Nashville is a home away from home for us. We love it there and love the music scene. Music really is everywhere and it is such an inspirational town!

Do you have any plans to tour in the US?

Lizzy: None at the moment but in the future we would love to cross the pond!

Have you gotten to know any other performers over in Nashville?

Lizzy: Yes a lot! We spent three months out there last year and got to see and meet lots of up and coming performers.

Have you had a chance to write with some of Nashville’s finest?

Catherine: We have indeed! The two that stand out to us who are both amazing writers, Jeff Cohen
and Rebekah Powell.

Of course Vince Gill played guitar on ‘Town Called Ugley’. He’s about as legendary as Nashville players come! How did that come about? Have you had any chance to get to know Vince?

Lizzy: It was a funny joke to get Vince to play guitar on “Town Called Ugley” when we mentioned it to our producer Bobby Blazier, his response was “I’ll ask him”… It was a very cool experience!! Vince Gill is a friend of Bobby’s so he managed to set up a breakfast meeting for us, so we got to chat to him for a couple of hours which was very cool too!!!

Your debut album ‘From Where We Stand’ has been very well received. How pleased are you with the response?

Catherine:From Where We Stand completely surpassed our expectations, we are completely overwhelmed with the response!

You released it quite earlier in your career when compared to The Shires who came about at a similar time – which of course isn’t a bad thing. Do you feel if you’d waited a little longer you might have benefitted from the big surge in popularity of UK country in 2015?

Lizzy: The 2015 surge shows lots of promise for the future! From Where We Stand was a perfect starting point for us but we feel that there are a few albums in us so maybe 2016 will be a good time to release album Number 2!

Have you started planning the follow up to From Where We Stand? 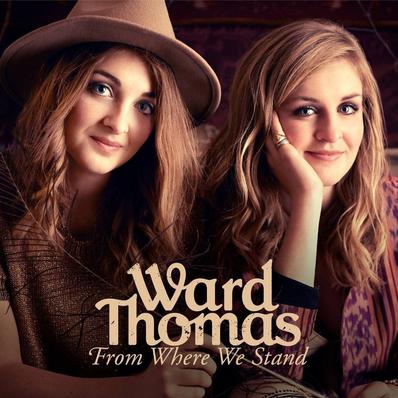 Catherine: We are in the process of writing at the moment 🙂

Lizzy: We will be playing a lot of festivals this summer and back in the studio by the Autumn. So 2016

will hopefully bring some new material!
Ward Thomas’ debut album From Where We Stand is available now. Keep an eye out for our