Since 2012’s Uncaged Zac Brown Band have continued to rise to meteoric heights with their hard work, commitment and ability to diversify. In this time they’ve headlined some of the biggest arenas in the States including Madison Square Garden and also the O2 Arena in London. It really has been a wild ride for Georgia native Brown and his band and one which is built on hard graft and the love of music.

Jekyll + Hyde has been one of the most eagerly awaited albums for some time. Fans were given a teaser of new material with the 4 track EP The Grohl Sessions Vol. 1 in late 2013 but a full length album has been in the pipeline for a long time. With a touring schedule as busy as theirs it’s not always easy to set the time aside to get in the studio but this March the band announced details of this album which was met with sheer excitement by fans (including us – we’d made the hope of new material from the band one of our top things to look forward to in 2015).

The albums title was as suggestive as anything. Fans of the band will know that musically these guys have the ability to mix it up like nobody else. Their live shows often include covers from acts as varied as Metallica to Queen – these guys really can do it all. The title suggested that this album would be showcasing more than one side of what they can do.

The album kicks off with Beautiful Drug. From it’s quiet opening with a banjo playing along it sounds like it could be any normal country song – until it really kicks in. The chorus is backed by an electronic beat that shakes your speakers. It’s a wonderful blend of country and EDM genres and feels like it has been inspired by some of the work done recently by Avicii. A lot of country music feels like it wouldn’t fit in a lot of bars and clubs (especially in England) but this song really does have that commercial appeal as well as staying true to the bands roots. Fantastic.

Loving You Easy is the next song and will be the second single from the album. If you liked the opening song on the album, well, this is completely different! It’s opened by a funky guitar which launches into an almost 70’s feeling R&B love song. Zac Brown’s vocals are spot on during this song and full of soul. It’s always been clear that Brown has a great voice but offering so many different genres really opens up the opportunities to showcase how great his range is.

Next up is Remedy. This is one of my personal favourites on the album and evokes the classic Zac Brown sound but amplified to arena size. The line ‘know you get what you give, love one another’ alludes to the groups second album and a mantra that they seem to live by. Musically this song is fantastic, it opens with almost a Celtic feel with Jimmy De Martini’s fiddle and progresses into a bigger and bigger sound throughout which culminates in a drum break with chanting which sounds like it could have been lifted from the Lion King soundtrack… in a good way. The song is a wonderfully uplifting piece of music that fits perfectly with the bands sound and message.

The fourth track on the album is Homegrown. This song was the lead single from the record and is a radio friendly stomping country song. It’s another song which is big in sound and will fill out even the biggest arena or stadium. The groups vocal harmonies are, as usual, right on point. It was the perfect song to choose as a single and let people into the new albums surprises gently.

interweaving vocals with Brown. Admittedly this is possibly my least favourite song

much like the fact that The Island Song did nothing for me on Uncaged.

What would you naturally ask for next after a big band number? That’s right, a

what it says on the tin. It’s heavy. Led by a big fat bass guitar line the song sounds

like it could actually be an Audioslave track. It’s mostly sung by Cornell which, to

Audioslave song on a Zac Brown album. Not my favourite but I like what they’re

known. Lyrically it’s a real heartbreaker about coming to terms with the loss of a

lover through illness. The line “It’s bittersweet, doctors said there’s nothing we can

do, took my hand and said take me home” brings home the hopelessness of those suffering from terminal illness and the people around them. It’s a really beautiful song that breaks into a huge crescendo of an ending.

With Castaway we return to the reggae-influence sound that the band have been influenced by previously. The opening line ‘Pour me another one, make it a strong one, we’re gonna have some fun tonight’ sets the stall out for this light hearted Jimmy Buffett-esque song. It’s all about escape normal life and living the ‘island life’ that Zac and the band have referred to before. It’s nice to see that, although trying new styles, they haven’t left behind the sound that they love.

Tomorrow Never Comes is another toe in the EDM waters. The song fuses together the usual stringed instruments that the band would include along with another electronic beat and drum loop over the top. The great thing about this song and Beautiful Drug is that the band don’t lose the sense of themselves they just add extra influences to their sound. This song has a great sing-a-long refrain and sounds even more like an Avicii (who is incidentally a big country fan) than the opening number.

With One Day we have another relaxed R&B number. Again the bands wonderful harmonies are on show as well as Brown’s superb lead vocals.

Dress Blues is a song which seems to be an early live favourite. Written by Jason Isbell it serves as an ode to the USA’s fallen heroes at war – recently the band performed it at the Bridgestone Arena in Nashville and it led to deafening chants of “USA! USA!”. Nothing gets the public going like a big fat slice of patriotism. The song itself is a tender and heartfelt tune with a wonderful guitar solo.

Young And Wild is another favourite of mine from the record. The bands refrain of ‘I remember, I remember back in the day’ is a real sing-along and the tune is a great upbeat summer number with a positive message. After the deep and meaningful Dress Blues this is a great pick me up.

Junkyard is a song which many fans may recognise from the Pass The Jar live CD and DVD. For this album it has been given an electronic makeover. With it’s swirling instruments and vocals it makes for a moody song with an in your face chorus. The backing vocals of John Driscoll Hopkins can be heard throughout bouncing perfectly off those of Zac Brown.

Wildfire is the penultimate track on the album and bounces along nicely with a great catchy chorus. Just like the rest of the album it shows off the music talent within the band as we hear the fiddle and twiddling guitars pop in and out over the vocals.

The album rounds off with an acoustic version of Tomorrow Never Comes. This choice is a particularly interesting one. With all the influences that we have seen on the record this song comes as a reminder of what the band have always done best. It’s almost like they wanted to remind us all just in case we forgot that they are an amazing bunch of musicians. But how could we forget that? 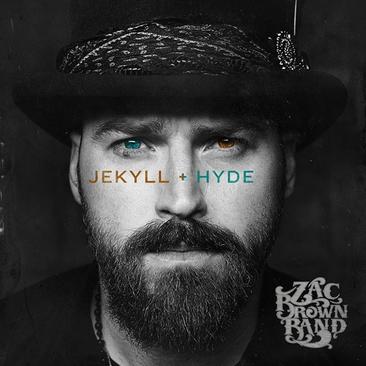 Jekyll + Hyde has been a long awaited record and it has lived up to every single promise. Zac Brown Band are not a band who like to stand still – both literally and figuratively. The album may be a few years behind it’s predecessor but this can be partly down to the time they’ve spent on the road (and maybe the dissolving of Zac’s Southern Ground label). In this time on the road they have clearly been honing their skills as a band and exploring where they want their music to go. This is a band performing songs in whatever style they want. I have no doubt that some country purists will bemoan a heavy guitar riff or a dance beat but those people just aren’t getting what Zac Brown Band are all about.  There is no doubt that every single member of Zac Brown Band is a hugely talented musician and multi instrumentalist and that only helps them figure out what they want from music and open themselves to all kinds of influence. With an album like this it would be easy to make it feel disjointed and all over the place but it just doesn’t. Songs like Beautiful Drug fit nicely in with Remedy and a swing song like Mango Tree doesn’t feel out of place with a hard rocker such as Heavy Is The Head. Overall this is a superb effort from a constantly evolving band who surely have a lot more albums in them and miles on the road.