I was having a tattoo done this weekend, it was a gift from my wife for my birthday, I wouldn’t say I am heavily tattooed, but I have a significant number, as does my wife and therefore the only reason she paid for me to have these tattoos is she has one eye on booking herself in to get “Gin” and “Tonic” tattooed on her knuckles (probably). I was talking to the tattooist about music and first gigs, mine was the infinitely cool and purveyors of fine T-shirts, The Ramones, his was the slightly less, but not uncool Black Crowes, which brings us quite neatly to the subject of this review, Southernality, the second album by A Thousand Horses.

Nashville residents by way of South Carolina, A Thousand Horses have been recording music since 2010

made waves, spawning a top 5 Country Chart hit in Smoke and Southernality itself going top 5 in the

Billboard Country Charts. A Thousand Horses appear to be turning into a thoroughbred (first attempt at

getting a horse reference in, it will be the last, trust me.)

Opener First Time confirms the tone I thought this album would take, a stomping, aggressive southern

The Hammond organ will permeate this album, as will Whitney Coleman and Kristen Rogers background

vocals, they are the Mary Claytons to Mick Jagger’s vocals and on this opener deliver well.

its toe in the country end of Southern Rock, Aldean on a better day. It’s the kind of song that will have

a grainy on tour video for it. It whips up into something quite magnificent, but again, Chris Robinson,

moody Black Crowes frontman is channelled, the rasp that Michael Hobby delivers, tips a nod, but isn’t a parody.

Breakthrough single, Smoke is perhaps the most country track on the album, it would sit comfortably in the hands of Tyler Farr, Kip Moore or indeed Jason Aldean, that’s more of a comment on its strength and its modern feel. It’s an album that is a sum of its influences, The Allman Brothers, Lynyrd Skynyrd and Black Crowes are the immediate reference points, but on Smoke its Nashville Country to the core. A deserved hit on radio and sales.

I think the enjoyable aspect of this album is its Southern Rock in the same mould as contemporaries Cadillac Three and Blackberry Smoke but its feet are placed closer to their country roots than those bands, preferring their rock roots.

Travelin’ Man although reminiscent of Remedy by The Black Crowes, retains a country edge, Tennessee Whiskey could easily be placed in the hands of Toby Keith,  and Sunday Morning could grace Dylan’s “country” album, Nashville Skyline and not feel forced. All three though, in the hands of A Thousand Horses, make this album, a joy, a surprising and unexpected joy.

Title track is Shooter Jennings at his most rebellious, it’s a party track, that’s not trucks and girls, harmonica and group vocals make is by far one of the most danceable tracks on this album, and shows that you don’t have to put a hip hop beat on an album to get people off their behinds.

The feeling that this album gives me, is that it’s an album for the Summer, and an album to be played live. The latter looks likely in 2016. Landslide in particular is a track that needs to be experienced live, the vocals, both lead and backing are exceptional.

Current Planet Rock play listed single Trailer Trashed is maybe the most “rock” track on the album, even that retains its place in modern country music, lyrically its themes are in line with the country charts, but musically it gives us a little more grit.

The album finishes with the Warren Brothers co-write Where I’m Goin’ and it’s a great closer, country and a potential single, Hobby’s contribution should never be underplayed but Brad and Brett Warren always deliver and this is not an exception. 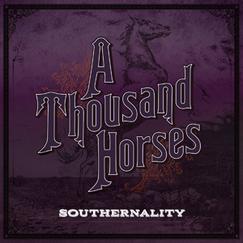 Overall
All in all it’s a surprising album that initially wasn’t sure that I was going to enjoy, I had heard Smoke and enjoyed it but with a Southern Rock tag, images of Kid Rock played out in my head. Instead A Thousand Horses gave me an album of balanced Country Music with a rock grit that didn’t overtake or impose on its roots. A recommendation, both on CD and live.

One thought on “A Thousand Horses – Southernality Reviewed”