Aaron Watson’s story is an interesting one. He’s released an amazing twelve full-length albums yet his most recent, The Underdog, is the first to reach the top 10 in the US Country charts. Although it was released earlier this year it had recently been recommended to me as one of the top country albums of 2015. The Texan singer has stayed true to his roots and remained unaffected by the refusal of Nashville’s big execs to accept him and his music.

The album kicks off with The Prayer, which starts the record in a slow-burning and moody way. The song is inspired by reading Johnny Cash’s book The Man In White and tells the story of a man trying to find the light in a desperate situation and searching for faith. It’s based on Watson putting himself in the shoes of Johnny Cash as he took himself to a cave in order to kill himself during his darkest days of addiction. The song itself is dark and reflective with it’s rolling banjo and fiddle.

The second song on the record is a cover of John Mayer’s Wildfire from his 2013 record Paradise Valley. The original song borders on country and Watson does a job in turning it ‘full country’. It doesn’t waver too much from the original in its arrangement save for a fiddle replacing Mayer’s guitar lines. It’s a great summer song and Watson does an admirable job of it.

Freight Train is the third track on the album. It comes out of the speakers at the speed of its namesake. The banjo hits you at a million miles an hour whilst Watson sings so fast at times it sounds like he could trip over his words at any second. It’s a belting honky tonk tune about being on the road as a musician. Musically it’s traditional country at its best.

Track four is the major breakout single from the album That Look. It was one of the most successful independent singles of 2014 and you can hear why when listening to it. It’s got all of the emotional balladry of any modern country song with the fantastic smooth vocals of Watson over the top. The song was written for Watson’s wife and could well be a popular wedding song for years to come. The true feelings behind the song can be felt throughout and this really is the benefit of listening to a singer-songwriters record.

Getaway Truck has some fantastic fiddle word again. This is another song that rocks along and blends modern country with a traditional sound. If this doesn’t get your foot tapping then nothing will!

Bluebonnets (Julia’s Song) was written in memory of Watson’s daughter Julia Grace who sadly died shortly after birth. “Long gone like bluebonnets in the Spring, they’re only here for a little while, it’s beautiful and bittersweet” tells the story of the brief moment together and the enormous sadness that Watson and his family felt. It’s a raw and emotional track that really conveys the sadness of the situation and the feelings of regret and emptiness afterwards. One line that really gets me is “There’s so much I can’t explain, like gravity and pain”.

Track seven, That’s Why God Loves Cowboys, hints to Watsons faith again as well as his Texas roots. It’s an ode to the men who run the land in his home state and the man he puts his faith in. It’s classic country in it’s themes and it’s music.

That’s Gonna Leave A Mark is another honky tonk stomping number. It’s about the heartbreak of seeing your woman with another man. The rhythm and rhyme of Watson’s vocals are again evident in this song and make the song a pleasure to listen to. At times he has the sound of Brad Paisley in his voice both in the actual sound and the wit of the lyrics.

The title track of the album, The Underdog, is an uplifting song for people struggling through hard times. He sings “don’t forget your faith in God above, don’t you forget your Mom and Daddy’s love… follow your heart and always believe in the underdog”. It again points to how important faith is to Watson but even for a Atheist like me it speaks volumes about being strong in life.

Blame It On Those Baby Blues kicks off with some driving guitar and awesome fiddle work. Again this sounds like it could easily be a Brad Paisley song – they seem to have the same style of country. It’s a fun love song that rocks along nicely.

The tempo slows down slightly on One of Your Nights. This is a song that Watson himself describes as “One of his lovemaking songs” and it is just that. It’s another love song that sweeps along.

Family Tree is about as country as it gets. It name-drops George Jones, Sweet Tea and Granny’s fried chicken. It talks about the importance of family and reflects on the good times.

The album signs off with the autobiographical Fence Post. In the spoken intro Watson tells of how this is a true story that happened in the office of a Nashville label, he isn’t trying to poke any fun he says and he loves country and the Opry but he does “have a problem with someone who can’t play a D chord telling someone with a dream that they wont get far”. It’s a cheeky song about Watson being told that he doesn’t have what it takes to make it in Nashville. It’s a fun song looking back to a tough moment in his life where he decided to stand up and get on with it regardless of what some people told him. The line “I’d rather be an old fence post in Texas than the King of Tennessee” sums this album up perfectly. 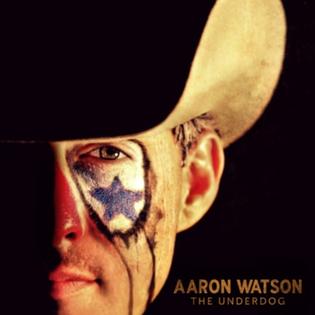 10. Blame It On Those Baby Blues

To say this is Aaron Watson’s twelfth album seems quite unbelievable. This record comes at you with all of the gusto of a debutant trying to make his mark. That being said the traditional sound of the album, which mixes perfectly with some elements of modern country, hints to someone who has been doing this for a long time. One thing I can’t escape is how much Watson’s music reminds me of Brad Paisley – even if you look at the man with his t-shirt, jeans and Stetson he has the look of Paisley! Clearly Watson has taken his share of kicks over the years but this feels like the record of a man who has stood up, dusted himself off and stuck a middle finger to the Music City bigwigs. The lyrics are heartfelt and at times funny and the music is of the highest quality. All that remains to be asked is who is the Nashville exec who told him he’d never make it and has he had his ears cleaned out recently?

One thought on “Aaron Watson – The Underdog Reviewed”