The first time I heard Ashley Monroe’s sophomore effort Like A Rose I thought at best it was merely OK. I didn’t feel that it came close to the work she had produced with The Pistol Annie’s, I gave that album a couple of plays and consigned it to its box. Then the positive 10 out of 10 reviews started piling up and it made me think, these fools must be listening to a different album to me. Idiots. That said I did relisten a few more times, and a few times more and currently Like A Rose is one of my all-time favourite albums. It was a slow burner.

Now we come to Ashley Monroe’s third album, The Blade and the plaudits have been coming thick and fast, everyone has been waiting for this album and only a fool would not be convinced of its genius. This is, indeed, awkward. I might be that fool.

Part of the reason for reviewing this album is to literally re view it, after all not only is Ashley Monroe’s song writing at its peak but she has surrounded herself with such quality it has to be good, Luke Laird, Matraca Berg, Brendan Benson, Miranda Lambert, Chris Stapleton, Vince Gill, as well as the criminally under known Gordie Sampson.

On To Something Good, the opening single from The Blade starts the album in a relatively strong mood. It comes across as a Blake Shelton song for my money, and that’s a positive reflection. I think Blake at times picks very strong singles, Sangria aside and I could hear him singing this. Medium paced and relaxed it’s a good start, if her voice on it is a little weak at times. Certainly on this song. Perhaps that weakness is a frailty? Unsure. My wife, ever the critic has just called her Smurfette.

Heading from that into the Mississippi blues of I Buried Your Love Alive, echoing her contributions to the Nashville soundtrack and arguably this wouldn’t seem out of place put into the hands of Hayden Panettiere, through this album I see vocal comparisons to Hayden.

Bombshell is the first out and out Pistol Annie’s type song, but cut loose of their bawdiness. It’s a beautiful track that is so much better with Ashley’s voice on it. Co-written with Gordie Sampson, it’s the start of a solid patch of songs with similar feel, similar tone, similar emotion. Bombshell, Weight of The Load and the album standout, The Blade. The latter is lyrically and musically the best thing on the album, and I suspect a track I will return to again and again. It is the only track on the album that Monroe had no hand in. It is phenomenal.

The pace livens up with Winning Streak, simple production, backing vocals and instrumentation. Strong undeniably, and invoking at times late period Elvis, again Ashley’s voice, for me at least lets this down. I think it’s with the pacier songs is where she struggles. I do however acknowledge that I may be alone in that opinion.

From Time To Time slows things down again and it’s the first time at least that I stop and think if this album is indeed “country”. The answer to that is probably not, but it probably doesn’t matter, its strength is in the song writing and for my money, not in the delivery.

If Love Was Fair, is another standout track, the intro reminds me of the superb Gary Allen single, Smoke Rings In The Dark, that’s where the similarities end as it is closer to Fleetwood Mac than Gary Allen. All positive things. Fleetwood Mac being along with Springsteen being the current influencer in country music its apparent Stevie Nicks vocally is an influence, not only on If Love Was Fair but throughout The Blade.

Has Anybody Ever Told You is possibly the first country track on the album, it’s another that I will return to, it’s a simple ballad that is enjoyable and a precursor to a run of country songs, Dixie, If The Devil Don’t Want Me, I’m Good At Leavin’ and Mayflower. Mayflower I was dreading listening to, wrongly, sometime a friend got in touch with me to tell me that “some woman called Ashley Monroe was working with Brendan Benson”, this is a fruit of that labour and beautiful it is too. Benson as well as an artist in his own right was part of Jack White’s The Raconteurs. 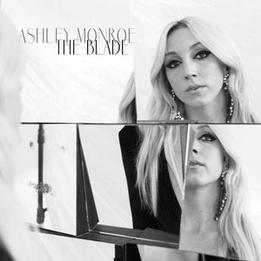 1. On To Something Good

2. I Buried Your Love Alive

4. The Weight Of The Load

7. From Time To Time

9. Has Anybody Ever Told You

All in all in isolation this album has many highlights, in isolation it is 13 tracks of quality, of a strong follow up but its lacking something, its lacking continuity, its lacking a thread, it gets away from Ashley Monroe’s voice at times and its telling on the mid paced tracks. The criticisms are weak, admittedly and I suspect all that read this will be thinking this fella knows shit all. I know shit all. Has the re listen done anything to improve The Blade‘s standing, absolutely, of course it has. It is a good album, it’s not poor, it’s an album that will have a lengthy life, it will feature in many yearend polls and it will garner a slew of successful singles. Just may take a little longer with me.