I have to admit I wasn’t very familiar with the music of Billy Currington before I was sent a copy of his latest record Summer Forever. It seemed the perfect time to introduce myself to his music and see what he was all about. This is the sixth studio album from the 41 year old so he’s certainly got some pedigree and experience.

The album kicks off with the hit single Don’t It. Co-written by Jaren Johnston of The Cadillac Three this has been one of the songs of the summer in the US and it’s easy to see why. It’s an upbeat song that you can hum along all day long. It’s the perfect party anthem that serves as a great introduction to this album.

Drinking Town With a Football Problem is another fun song that takes you to another place. It’s upbeat and fun with a lot of twang and is definitely one that can turn any frown upside down. It fits nicely with the happy summer theme of the record.

With Wake Me Up things slow down slightly and become a little more reflective. Lyrically it deals with the feeling of pining for someone and letting them know that you’re there for them any time. It grows into a very ‘big’ song with driving riffs and a great guitar solo. With the record seemingly being a summer record this deals with the more emotional side of things whilst still being upbeat.

Jessie James Decker lends her vocals to the soulful Good Night. It opens up with some funky guitar and a nice guitar riff. Currington’s vocals are smooth and include a great reference to ‘Kicking our shoes off and listening to some Clapton’. As a Clapton lover this will always get me. Decker’s vocals add a great extra element to the song. From what I know of her she’s become somewhat a reality TV star but judging from her voice here she should be given another shot at the big time! This is a great relaxed tune for sitting out and listening to on a warm night.

Jonesin’ is a song title that would have meant nothing to an Englishman like me before watching various American Seth Rogen stoner movies. It’s another relaxed song that hints to Jason Mraz style guitar. Again it’s a love song which benefits from Currington’s superb smooth vocals.

With Give It To Me Straight Currington laments another ex-lover. This seems to be a common theme at times on the record. It keeps that laid-back mood to the record. It’s not a bitter song but a softly lamenting number.

It Don’t Hurt Like It Used To is much more in the modern country rock vein with driving guitars and a soaring chorus. It feels like another song about moving on from someone but the positive time after the hard part is done.  This is also the only song on the record that Currington has a writing credit on.

Do I Make You Wanna is another epic sing-a-long number that fits in perfectly with the album.

One of my favourites on the album is the fantastic Sweet Love. With it’s funky acoustic guitars and another sing-a-long chorus it’s a sure fire hit if Currington decides to release it as a single. It’s just the perfect happy and upbeat summer number – you can’t be unhappy listening to this one.

The penultimate song on the album is the genre-bending Soundtrack. With the almost spoken lyrics is reminiscent of some of the vocal styles shown by the likes of Florida Georgia Line. It’s another upbeat and happy number and even touches on a little bit of rap.

The final track of the album is the title track Summer Forever. This one has writing credits from some of the biggest names in modern country – Cole Swindell, FLAGAL’s Tyler Hubbard and Brian Kelley and Jaren Johnston of The Cadillac Three. It’s got an epic chorus and slow burns the album to a fitting end. 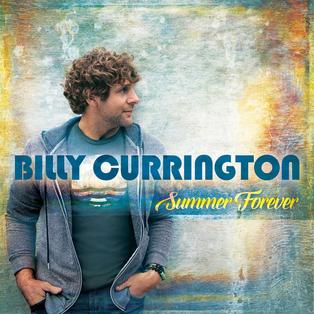 2. Drinking Town With A Football Problem

6. Give It To Me Straight

I have to admit that this album was one of the most pleasant surprises I’ve had this year. I’d not really taken the time to get to know the music of Billy Currington before this and just gave it a whirl having been sent it – wow was I glad I did. Along with Kristian Bush’s Southern Gravity this has to be one of the defining summer albums of 2015. Each song has it’s own personal story or touch and fits perfectly onto the album. There is enough variety with the upbeat numbers to keep it interesting whilst sticking to the common ‘feel good’ theme. There isn’t much to be found in the way of ballads or slow burners but that’s not what this album is for. It’s for sunny days with the windows down and the music on loud!