There has been a lot of hype about the first album to be released by either Blake or Miranda Lambert after their surprise split last year.

Both Blake and Miranda were performers in their own right when they met in 2005.  At the time Blake was already married, but he divorced in 2006 and started dating Miranda.  They married in 2011.  Both continued to achieve huge success with their individual careers.

In 2011 Blake became a judge on the US talent show The Voice.  He & Adam Levine are the only 2 judges to have been on the show right from the start for all the seasons.  It is on this show where he met his current girlfriend Gwen Stefani.

The album starts with Straight Outta Cold Beer.  This is a typical red neck type of track that Blake does so well.  We have pick up trucks and dirt road tracks, we have hunnies, we have John Deere tractors and of course as the title suggests, we have cold beer.  A good and promising start to the album.

She’s Got a Way With Words slows things down and is a very clever play on words track.  It is also the 1st indication that this could be a ‘break up’ album!!  It starts off almost as if it is a love song, but as soon as Blake sings ‘She put the her in hurt’ you kinda know where it is going to go.  As I say, it is a very shrewd play on words with ‘She put the hang in hangover, she put the ex in sex’ etc.  Very clever!

Bet You Still Think About Me stays with the slow tempo and is a heartache song!  In this track Blake is lamenting a lost love & the fact that he still thinks about her even though he doesn’t want to and I think he is hoping she is still thinking about him too.  Blake’s voice comes across strong and powerful in this track.

The 4th track – Everytime I Hear That Song continues with the break up theme, yup, this really is sounding like a break up album!!  This track though is one that I think everyone who has ever split up from a person they love will equate to.  It is about a song that was their song so every time he hears it he is transported back to happier times with her!  There are some beautiful lyrics and it is a track that does actually transport you to a different place, you can imagine being there with him & her, standing in the rain with them!

Came Here To Forget was the 1st track on the album to be released as a single and debuted at number 1 on the Country Digital Song chart.  When it starts with the line ‘Girl you’re getting over him and I’m getting over her’ you know the break up theme is continuing!  It is a poignant number with them being in a bar drinking their sorrows away, trying not to check their phone, but unable to help themselves.

By the 6th track Every Goodbye, I for one am getting bored with the break up theme and am beginning to miss the Blake of old!  He really is going for the sympathy vote on this album!

With It Ain’t Easy we do at last move away from the break up theme, now we are back at the beginning of a relationship when you don’t want to be apart from the person.  After all the break up songs, this one makes a refreshing change.  I still find it a tad dreary though!

Next we have A Guy With a Girl; at last we are getting back to Blake!  In this track he is showing off his girl & loving the attention he is getting as a result of her being on his arm.  This is an uptempo feel good song.

Go Ahead and Break My Heart is a duet with Gwen Stefani.  Gwen seems to have a really funny twang while she is singing this.  I don’t really know Gwen’s previous work, she was never an artist on my radar, so I don’t know if this twang is normal or if she feels she has to put it on as she is singing a Country song!  It seems to be an odd choice of song to sing with a new found love and it sends out mixed messages they seem to be saying time to move on and then in the next verse – you have me dreaming.  Personal taste, I do not like this track at all!  I feel Gwen adds nothing to it & I do not feel the 2 voices blend together well.

Track 10 is the track Friends featured in the Angry Birds movie.  Not sure there is much I can say about this track, it is for a cartoon!!  At least it is a cheerful track & I like the theme of being friends, watching out for each other & always being there for each other.  I will also say I find myself joining in with the irritating ‘boing’ that is prevalent throughout!

One Night Girl is a love track about him wanting to take his time with his lady & treating her properly, loving her the way she deserves.  A proper southern love song!

At last with Doing It to Country Songs we are back to the red neck type of song from Blake I love the most!  Basically he is singing about doing everything (including ‘IT’) to Country songs!  From waking up in the morning to playing pool with his buddies, he is doing it to country songs.  Love this track & it makes me yearn for a country bar playing Country music!

Green extols the virtue of being a proper farmer boy, how he is a home grown boy at heart, with his sweetheart by his side.  As you would expect with a track like this – the john deere tractor makes another appearance!!

You Can’t Make This Up is the penultimate track.  She is in a bar for a date & gets stood up.  She leaves but forgets her phone so has to go back for it, he is sitting in the seat she has vacated & seizes the moment, locks on to her & that is it, they are falling in love!

The last track on the album is Saviours Shadow.  It is a gospel type number & kinda sounds like a nursery rhyme with the tune. 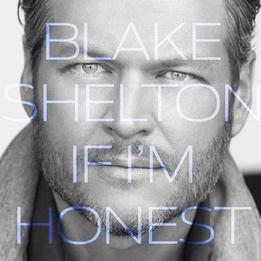 For me, If I’m Honest is a hugely disappointing album.  I thought at first it was a ‘Grower’, I thought I didn’t like it as my expectations were so high.  I have now played it several times, even more so in light of writing this review, but I just don’t like it, it doesn’t do it for me! I find with all the break up tracks at the beginning I start to get bored & then Blake just does not pull me back in again!  I know a lot of people will disagree, I have already spoken to a friend who thinks it is Blake’s best album yet!