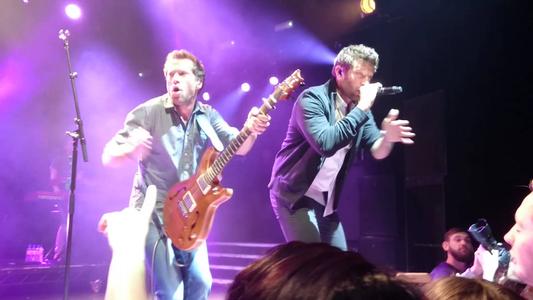 makes you sit up and pay attention, especially when the tickets only cost £17! There was however one minor issue that made me think twice about attending the recent Brett Eldredge concert at Camden Town’s Koko. It was on Valentines. Cue every cliché in the book.

I was close to not going but following Brett on various social media including his ever popular SnapChat posts I put my anti Valentines thoughts to one side and went along with one of my mates.

I have been a fan of the 2014 CMA New Artist of the Year since the release of his first Country Airplay hits Don’t Ya and Beat of the Music from his debut album Bring You Back. His second album, Illinois, released in September 2015 brought him a US Country number one and peaked at number 3 on the Billboard 200.

Koko is a venue that isn’t new to having country artists perform, most recently Hunter Hayes and soon Kip Moore. It has a capacity of just under 1500 and seemed close to full on Sunday night, which considering Brett doesn’t have the Country to Country Alumni tag is quite impressive and shows the popularity of Country Music. I like Koko as a venue, it’s built over several floors so you can’t complain of not getting a good view of the stage. It gives you option to stand at stage level, stand on one of the balconies (I think there’s about 4 different levels) and if you get their early enough and people don’t stand in front of you can watch from sofas!!!

Fans seemed keen to get the best vantage points for this gig and there was quite a que building a good hour before doors opened (I’m not one for queuing and will sit in the pub till it gets quieter). On this tour Brett Eldredge has invited along UK Country band The Pauper Kings, which was a good touch as recent country concerts I’ve been too have had some bizarre choices of support act (Sam Hunt had a Liverpudlian Boy Band called Mic Lowry!). I hadn’t seen Pauper Kings before but knew of them from performing at Country to Country last year so I decided to head inside Koko to see what they were like. I wasn’t disappointed and they really got the crowd going, with several around me singing along. They also offered the crowd a future country covers of Dixie Chicks and Keith Urban to add to the excitement. I would recommend checking them out and expect big things from in the not too distant future.

If you follow Brett Eldredge on social media he comes across as a guy who loves what he does and is so full of energy and enthusiasm for it. When he came onto stage to huge cheers blasting out “Fire” bouncing around the stage like a kid who’s had far too much sugar. There were times during this opening track I generally think it was pure amazement on his part how many people in London knew his music. When performing “Beat of the Music” the too much sugar side of him came out again as he held out the microphone to the audience to sing along, again with the shocked expression on his face that people knew the words.

It was a varied set from Brett, offering several covers including Ray Charles’ I Got a Woman and Sinatra’s The Way You Look Tonight (told you there would be Valentines clichés). While on the clichés there was even a proposal on stage! He offered music from both albums for well over an hour before exiting the stage following a sing along to Tell Me Where to Park. For an encore Brett came out with a track from Illinois, Shadow before finishing with the platinum selling track Don’t Ya, while throwing out red roses!

It had the clichés of Valentines but there is no getting passed Eldredge is an amazing performer and sure to be headlining stadium tours in the States and winning more awards before too long. Looking back at the night now I can’t see him performing in a venue of Koko’s capacity in London again and like I felt when I saw both Sam Hunt and Hunter Hayes at the 200 capacity Borderline it might be one of those nights when you can say I was there at his first UK gig and it cost less than £20. It’s a shame this has only been a three date UK tour as I’m sure he would be able to sell tickets to a full tour and hopefully like several other country artists have done recently he will be back for a second time very quickly now he has seen the fan base he has built up here.

It’s looking like it will be a busy year of country music concerts in London and across the UK and this was an excellent way to kick start it.