Fans of The Brothers Osborne have waited patiently for their debut album, but the wait is now over with the release of Pawn Shop. In September 2014 we got a sneak peak of what was to come with the release of their debut 5 track EP. The brothers, TJ and John, grew up in the blue collar town of Deale, Maryland and have very much stuck to their roots in with their debut album and can hold claim to having co-written and co-produced every track album.

Dirt Rich is a great choice for an album opener. Brothers Osborne come across as one of those

bands who will never forget their working class Maryland roots and this is a song that some’s that
up. It’s more about enjoying themselves than making money. If you’re the type of person who will
happily botch job something with Gaffa Tape then this song is for you! “If your broke don’t fix it, learn to live with it.”

21 Summer is your stereotypical reminiscence song of the one that got away, that every now and
then you wonder what they might be up to.

If you haven’t heard Stay A Little Longer, the Grammy Nominated song, where have you been? It’s the first song to feature from the brothers’ original EP and is deservedly flying high in the charts, giving them a first number one hit. It’s also the first track on the album where John Osborne can really let loose for a guitar instrumental. This is one of those songs that will have arenas rocking.

To put it simply Pawn Shop is a song about the things you can buy in a pawn shop. “Get some vinyl records and some DVD’s at the Pawn Shop.” The incredible thing is it is so catchy you’ll love it (think Toby Keith, Red Solo Cup!) and in the current market has hit single potential. It sticks with the momentum of the guys seeming to stick with their hometown roots. Somehow I can’t see an English version singing about a Cash Convertors having the same potential!!

Rum is another song that was on the original EP and marked the brothers’ first radio release back in March 2014. It peaked at number 34 on the Billboard Hot Country Songs chart, but I would imagine a re-release would fare much better in 2016. You can be excused for thinking you’re listening to Zac Brown’s “Toes” with lines like
“Dipping our toes in the water, I don’t care if it gets any hotter.”

Loving Me Back sees a duet with Country 2 Country alumni Lee Ann Womack. It offers a change of pace to the rest of the album so far to a more classic country vibe but it is a duet that works really well. While 21 Summer was a reminiscence this is more about present.

American Crazy is the sing-a-long, shout-it-out loud song. You can guarantee sell-out crowds will be singing “we’re lost, we’re found, we’re up, we’re down”. This has to be a hit anthem single. Upbeat, positive message and another guitar solo to give Brad Paisley some competition

Greener Pastures offers a very traditional Southern Country getaway song. As said previously this album sticks to their roots and this is another song to send the listener that message as the brothers’ head into the unknown.

Down Home is another upbeat, boot stomping song. It’s guaranteed to go down well with a live audience.  The track title pretty much some’s up the song.

Heart Shaped Locket is the driving with the windows down and your arm surfing song. It’s the song that blames everyone but yourself and John lets loose with another guitar solo (I don’t think I’ll ever get bored of those!)

It Ain’t My Fault may be the last song on the album but it is one worth waiting for. We’ve had the sing a long, the shout out loud and the boot stomping now we have the clap along track. This is the regret the night before song that I’m sure most can relate to and have a shy smile at the lyrics. 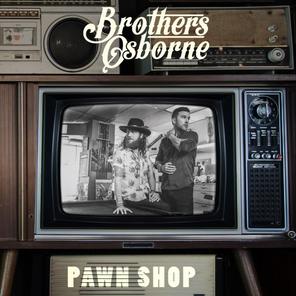 You couldn’t ask for much more from a country album than what the Brothers Osborne have offered with Pawn Shop. It seems to tick all the boxes and I have sympathy for whoever has to select which song to use as a single next. If you didn’t know much about country music you would easily think they had been releasing albums for years. TJ’s low baritone voice and John’s guitar skills combine effortlessly and I’m sure Pawn Shop is the start of many great things. This is just the start of big things for The Brothers Osborne and 2016 is sure to be a huge break-through year.

I wouldn’t usually add anything to a review, especially after Ian has done such a great job writing about the record, but I think Pawn Shop really is something special. If I listen to Stay A Little Longer any more times even my iPod will be sick of it. Songs like 21 Summer and American Crazy show that the guys can knock out the catchy hooks whereas with It Ain’t My Fault with it’s ripping guitars it almost feels like Brothers Osborne are going to do for country what the The Black Keys did for blues. A top album!

Check out our interview with Brothers Osborne here!