Oaxaca is a state in Mexico, one of its sons is the painter Rufino Tomayo. One of his most famous paintings is called Day and Night and to be brutally honest, me at my most drunk, using my right hand, in the dark could do better. But hey, everyone is a critic. Oaxaca is also the final track on the Cale Tyson album, Introducing Cale Tyson. It’s likely to be one of my favourite tracks of the year when I sit down with a cheap glass of wine at the end of the year and muse on what was the best I heard.

More of Oaxaca later. Cale Tyson, Texas born, Nashville raised. He has released a number of EP’s which make up his latest release Introducing Cale Tyson. Released here in the UK by Clubhouse Records, a fantastic label based down in Amersham.

The name Cale Tyson admittedly was not familiar to me and it conjured up chiselled all American denim shirted and faceless. There appears to be a proliferation of Cole’s and Chase’s making country music at the moment and I fully expected Cale Tyson to be cut from the same cloth. He isn’t by the way, I am always having these preconceived ideas.

This release kicks off with Honky Tonk Moan, the bastard son of Mule Skinner Blues and Walking After Midnight, a track so entrenched in the country of Jimmie Rodgers you would be forgiven for thinking that Cale Tyson is some retrospective no mark from the US. You would be wrong, but you would be forgiven. Honky Tonk Moan is a traditional beauty, its Audrey Hepburn, its Elizabeth Taylor, its classic and timeless and its as far from the faceless Chase’s and Cole’s as can be. This review is not going to be a chore I thought to myself. Pedal Steel, I am a sucker for and it isn’t resigned to let’s give it a rest for this release pile.

The question I had what direction would the rest of the album going to take, and answered on Is This Flame Burning Low. It’s a classic country, it’s what Dale Watson calls Ameripolitan, but it’s also a nod to Gram Parsons. Not Americana, this is country as, and its treated both with reverence and respect. But damn this guy knows his way around a tune.

Lonesome in Tennessee takes his descriptor, sad bastard outlaw country to the next level. This guy has seen some heartbreak. You know when you are kicked there is always a song in there and across these tracks it seems Cale Tyson has took a fair old kicking. Lush and full, Lonesome In Tennessee sees Cale deep in the heart of Texas country. Simple songs of love, loss and longing that make you want to hit the repeat button.

Not Missin’ You sees our protagonist rueing a lost love, a love song for a country fan that wants something more. Shit the bed this is good. Rolling Stone you have nothing on me. Maybe it’s the fiddle, maybe it’s the steel guitar, maybe it’s the lyrics or maybe I have a piece of grit in my eye but hell, such a simple, yet gorgeous song that give something more each listen.

The entire album, 13 tracks takes you through Cale’s love life, his loneliness, at times its Jimmie Rodgers, at times it The Jayhawks at their most country, on Long Gone Girl he even gets a little funky with us. Don’t be alarmed he ain’t Pharrell, just adds a bit of smokiness to proceedings, a little New Orleans. It adds a little light and shade to the album. It also puts his band through their paces, the problem with MP3’s is you don’t get liner notes but whoever you are ladies and/or gents, you damn good.

Old Time Blues is an homage to 80’s rap god Biz Markie. Who am I kidding? The guitar reminds me of Wayne Walkers All I Can Do Is Cry or Charlie Feathers Can’t Hardly Stand It, or maybe even Duane Eddy, but that’s where the Rockabilly similarities end. I love this album as it doesn’t stray from a traditional stone cold country flavour that is perfect for Saturday mornings. Or Wednesday commutes. Or Friday nights in the Kitchen. It’s had a lot of play.

Thorn In My Side keeps the tone set by the other tracks on Introducing Cale Tyson, and there that pedal steel again, who are you pedal steel man, make yourself known???? It’s gorgeous and beautiful and it makes a fantastic song great. It’s a drinking buddy of Jim Reeves’ He’ll Have To Go. A drinking buddy that’s been over served and has started kicking the jukebox, but a drinking buddy none the less. I want to drink with this guy.

Its over far too quickly before we are hit with a frying pan in the face with Fool Of The Year, a song that rattles along at a pace, before it slows down to a manageable tempo, temporarily, “I’ll accept the town key because I’m fool of the year”. Again this is timeless, you know its modern, you know its recorded recently in relative terms but it could be from any decade, there isn’t any name checking of rappers here, or heavy metal guitars or RnB rhythms.

Its lazy and yet easy to compare Cale Tyson to people that have come before him, I feel guilty for doing it but I want to give you reference points, that influence you into buying Introducing Cale Tyson, or going to see him on his current UK tour. Do you like Hank Williams? Well you will love Borrowed Love (To Go). Do you like Florida Georgia Line? Well you will love Borrowed Love (To Go), do you love Bruno Mars, well you get the idea of that. The thing is, Cale Tyson sounds like, well he sounds like Cale Tyson, he is a product of listening to country music and soaking it up and spitting out his own version of country music. He is ploughing that furrow that Whitey Morgan, JP Harris and their ilk are ploughing and for me, Cale Tyson has put out something so strong it makes me excited to hear new material.

Before long we arrive at Oaxaca. It’s the final track on the album, a faultless album that has been more than a joy to review, to listen, to relisten, to listen again. Oaxaca could be repeated 10 times at the end of this album and you could not get weary of it. It’s an immense and beautiful song on an immense and beautiful album. An album, and a track that will feature in many many end of year best of’s. The album doesn’t get any better than the final track. Glorious. 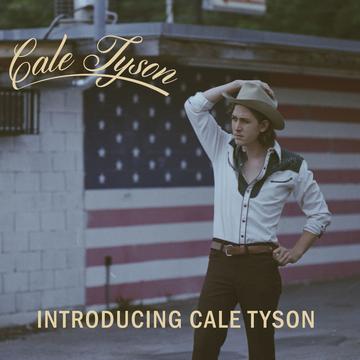 High On Lonesome
1. Honky Tonk Moan
2. Is The Flame Burning Low?
3. Lonesome in Tennessee
4. Not Missin’ You
5. Long Gone Girl
6. Old Time Blues
7. Thorn In My Side

To say I have enjoyed this album is an understatement, it’s the last bowl of cereal, it’s a newly made bed, its popping the top of a jar of coffee. It makes you feel sad, lonesome, blue and happy all at once. It needs a large audience and that is you. Buy the album, or go on Google or Spotify and listen to it. Track down Cale Tyson on Twitter (he is ace on there, trust me) and tell him how good this album is. It’s an essential. It shows me that again Country Music has many different facets, facets that are needed to make it interesting and exciting. Cale Tyson is exciting, and enjoyable and everything that is right about modern Country Music.
Recommended Tracks

Oaxaca, Thorn In My Side, Dreams Don’t Come True, Lonesome In Tennessee