Canaan Smith’s debut LP Bronco came highly anticipated after the success of his EP and some heavy touring with the likes of Dierks Bentley. Smith was rated as one of the top up and coming artists of 2015 so I was looking forward to this release to see just what he has to offer.

The album opens with the moody and sexy Good Kinda Bad. The first thing that strikes is that Smith sounds a bit like a smoother Dierks Bentley with his voice. The song is definitely one that grew on me from a few listens, it doesn’t blow you away at first but once I’d listened a few times I really started to appreciate it.

Stompin’ Ground keeps things going in a similar vein to the opening track. It has a somewhat slow and r‘n’b influence intro and a big chorus. It’s a decent song but doesn’t set the world alight.

The lead single from the album Love You Like That is up next. It’s a really catchy number and you can see why it made such a big impact for Smith. The big guitars and soaring chorus make it an instant hit.

The next single from the album will be the fun Hole In A Bottle. It’s a typical light and breezy country song about drinking and having fun on a Friday night. Sure, it’s been done a million times before but it’s catchy and a bit of fun so I don’t have a problem with it. If I’d had enough beers I’d be dancing (terribly) to this one. Unfortunately I don’t think it would lend itself to my signature robot dance too well…

Stuck is one of my favourite songs on the album – aside from the intro, which I just can’t stand for some reason. It’s a heartfelt and big ballad. This seems to be the type of song that fits with Smith’s voice perfectly. It’s a song about love and broken hearts and there will always be place for those. Great tune.

One of Those is typical modern male country. It’s Canaan telling the world that he’s country and he’s not afraid to admit it. Weirdly his voice turns a little Eric Church on us during this one. It’s a decent album track though.

With Mad Love we have another big ballad. It has the token country reference to Johnny & June and

Canaan also sings “haters gonna hate”. That seems to be a big theme in music at the moment… haters

Love At First has some fantastic jangling guitars in the intro and leads into a fun and funky chorus. It’s

clear that Canaan has a lot of range to his voice and can easily move into the smoother side of things.

Next up is American Muscle which is probably the most rocky song on the album. Musically it’s a great

foot tapper. I’m not quite convinced that Smith has the voice for a really rocky song which leaves it

feeling a little empty. It’s a decent song to play nice and loud but I can’t help but feel it has much more potential.

from American Muscle. It doesn’t do too much for me and is another song that very much taps into the

The album is finished off by the title track Bronco. This is an incredibly heart felt song about the loss of Canaan’s brother as a child. As a tribute to his brother it is done absolutely perfectly. The guitars are subtle and Canaan’s emotional vocal drives the song along nicely. The line “Momma still puts flowers out by your grave, Daddy pulls against Ford at Sundays race, Leah has a hard time thinking she’s older than you, and me I still see you backing out in reverse with the headlights bright behind your hearse, If I could only fix things like someone I once knew” tug at the heart strings. It’s a beautiful song and a fantastic tribute to lost loved ones. 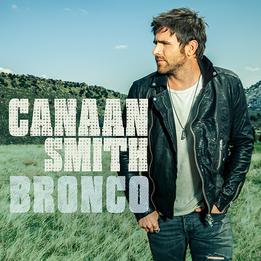 As a debut album Bronco certainly has a lot of strong points. Songs such as Love You Like That, Stuck and Bronco show the quality that Smith possesses. They’re well crafted, catchy and, in the case of Bronco, raw songs. The problem I have with the album at times is that there are too many songs which just lack that bit of punch. A song like Good Kinda Bad is brilliant but just lacks that bit of ‘in your face’ edge that could make it even better. Smith’s sound is not classically country but the genre has evolved and this type of sound is the new country. Like many of todays stars he blends country, rock, hip hop, r’n’b and many other genres to create his sound. Whilst it’s not the perfect album it’s a promising debut.