Carrie Underwood shot to stardom in 2005 after winning season 4 of American Idol, this is when I first discovered my love for country music. After watching Carrie perform and breeze through each week, she sang ‘Bless the Broken Road’ with the well-known country artists Rascal Flatts in the final week, before going on to win the competition. Her debut album ‘Some Hearts’ went straight to number 1 on the Billboard Top Country Albums and became the best-selling country album for both 2006 and 2007 which well and truly solidified her place within country music.

Carrie has since gone on to have worldwide success with 7 Grammy awards and 5 CMA awards, a global tour and the very successful release of  4 more albums, as well as a greatest hits record, celebrating a decade of achievements.

Carrie’s latest studio album ‘Storyteller’ was released in 2015. It kicks off with ‘Renegade Runaway’ which is about a girl who is so striking and mesmerising, yet calculating and manipulative, her aim is to make you fall in love and then before you know it she is gone and on the run. The opening music is fast and upbeat as Carrie’s vocals build intensity right up to the chorus where the song comes to the pinnacle point where the lyrics ‘That pretty face, love you, leave you, play you like a heartbreak bandit’ are sung and for me, these words sum up the focus of song. Although this isn’t one of my favourites, the fast pace starts the album off with a bang.

‘Dirty Laundry’ follows keeping with the upbeat tempo, I love this song, for me it’s a classic country theme about knowing your partner is cheating and making sure everyone knows about it… ‘I’ll tell ’em every little detail, how you drug me through the mud’, some people may be embarrassed by a spouse cheating on them, however in this take on the situation, Carrie makes it known that the only embarrassing one, is the cheater. And I couldn’t agree more. This is the kind of track that you want to sing at the top of your lungs after a whiskey or 2.

Things get a little darker with the next song ‘Church Bells’. Appropriately it opens up with the sound of church bells ringing, often the sound you hear after a wedding. The story starts with a typical boy meets girl, they fall madly in love and then get married scenario… however there is a dark twist when Carrie sings; ‘Everyone thought they were Ken and Barbie, But Ken was always getting way too drunk.’ If you’re a fan of Carrie’s previous work, like me you may find this song resembles ‘Two Black Cadillac’s’ which appeared on her album ‘Blown Away’. I like how the use of church bells is used for the celebration of a wedding and also to show the desperate prayers of someone hoping everything will be alright. Although this is slightly darker than other songs on the album, I feel it touches upon a very important subject that is far too often brushed over for fear of being taboo.

Things slow down a bit with the next song ‘Heartbeat’, I remember hearing this for the first time and falling in love with both the music and the lyrics instantly. This is one for all the love birds, with a slow beat in the background that could easily resemble a heartbeat, Carrie sings… ‘we’re dancing to the rhythm of your heartbeat’, as if music and heartbeats are one in the same, I personally love this concept and believe it to be true. Although this song may come across as more of a pop ballad, there are still those country vibes through the music and the lyrics used to describe the scenery in the song.

‘Smoke Break’ was the first song released from this album and rightly so. It is a song that every person who has worked hard can relate to. It covers all the different people with a variety of every day jobs i.e. city workers, parents etc. I’m sure many people who have had a long hard day can remember thinking ‘I don’t drink, but sometimes I need a stiff drink’ This is an all-out country song explaining that it is ok to relax and take a break once in a while.

Everything about ‘Choctaw County Affair’ screams county.  The harmonica used at the very beginning sets the tone for the whole song. There are lies, deceit, a love triangle, a court case and small town that will stick together no matter what… ‘There’s nobody, there’s no witness, so y’all go mind your business, It’s a Choctaw County affair’. This is a slightly grittier tune with a great story.

‘Like I’ll Never Love You Again‘ is another slower, more romantic song. It outlines the story of a couple sitting down together and doing what couples do, like talking, drinking wine and falling in love all over again. The lyrics ‘I wanna love you like I’ll never love you again’ pretty much sums up the idea of the song, the slow, soothing music is great to accompany the love story that unfolds throughout the song.

I’m sure many people have been in the situation where they are chasing someone who is chasing someone else, in terms of love/relationships, ‘Chaser’ is the 8th song on the album, this is another favourite of mine. The song starts off slow with a pretty sombre mood where Carrie sings about wanting to forget all about someone. As soon as the chorus kicks in the tempo speeds up and we learn that basically the girl likes the boy, who likes a different girl… ‘You’re looking at me and thinking of her and it cuts me like a razor’. If you need some encouragement and motivation to move on or simply to relate to, this is your song.

‘Relapse’ is next on the list, the meaning of the word is basically the deterioration of something after an improvement. There is a great build to this song in the music, the pace increases as the song goes on where at first there is denial, which then turns into excuses. Carries uses the line… ‘One or two little sips, I’m alright, I can quit’ to compare the actions of going back to someone who hurts you over and over to that of an addict. This is a great tune to sing along to with the music turned right up.

‘Clock Don’t Stop’ opens up with the sound of a ticking clock, shortly after the lyrics kick in. This song is a reminder that time never stops and spending time fighting with loved ones is literally a waste of time. Carrie refers to the clock hanging on the wall and ticking away, whilst a couple continue arguing over something stupid… ‘Always hanging on the wall, no, it don’t care at all, it won’t slow down; it won’t wait’. Another great song to sing along to.

‘The Girl You Think I Am’ is a song about the way parents view their children, it’s a sweet sentimental tune where Carrie sings about how she wishes she could see herself the way her parents do. I love the music for this tune, it’s a great country record for those who like the slower songs. I also think it’s a very relatable song for a lot of people as everyone wants to do the best they can and be the best version of themselves… ‘You always see the best in me when I can’t, I wanna be the girl you think I am’.

Next up is ‘Mexico’, this is a fun and exciting song about a couple on the run from the cops. ‘Take the gun, hide the car and the money, I’ll meet you in Mexico’ this song brings up the tempo and transports you into their world for a few minutes, the description of the scenery and the people helps you imagine you’re in their shoes for a second. There is a very wild west feel to this with the guns, money and cops. It has a huge country feel with the instruments used and an awesome storyline to pull you in.

‘What I Never Knew I Always Wanted’ is another slow and sweet record, it’s the idea of thinking you are happy with what you have until something happens to make you realise otherwise. As this is one of the songs that Carrie co-wrote, I think it’s safe to assume that this song was inspired by her Husband and her child who was only born at the beginning of 2015. I love that this song gives you a slight insight into Carrie’s personal life and you get to learn a little about her family, there is also the message of you never know what is around the corner in life, this line sums up the whole song in my opinion… ‘Life has a way of showing you just what you need and who you were made to be’. 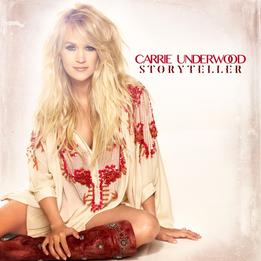 I was counting down the days for the release of this album and it did not disappoint, I had it on repeat for a good few months. I liked that there was a slightly softer side to the record with songs like ‘Heartbeat’ and ‘What I Never Knew I Always Wanted’ as opposed to previous albums, yet Carrie still added ‘Dirty Laundry’ and ‘Choctaw Country Affair’ to give it a gritty edge. Also ‘Church Bells’ tells a great, but dark story. A lot of the songs seem to be very relatable for many when it comes to relationships, particularly ‘Relapse’ and ‘Chaser’. All of the songs have great depth and truth to them, not to mention many slide guitars and harmonicas to really push forth the country vibe. Although some of the melodies have a hint of ‘pop’ to them, Carrie remains secure with her place in the world of Country music.