I have to admit to not really listening to any David Nail before a copy of his latest record Fighter hit my doormat. Nail was at this years C2C festival making a few appearances around the O2 and sadly, due to how manic the weekend was, we never got the chance to sit down and have a chat. By all accounts Nail put in some top performances over the weekend and really increased his stock with the UK crowds. Fighter was an album that I researched a little bit before listening to and found that it was named in honour of Nail’s wife who helped him through something very close to my heart when he suffered from depression.

The first track on Fighter is Good At Tonight and features the brothers that I’ve not stopped raving about this year – Brothers Osborne. The song is a typical album opener and brings Fighter flying out of the traps in a high tempo way. TJ Osborne’s characteristic baritone vocal combines perfectly over the top.

Nights On Fire was the lead single from this record and has been doing the rounds for a little while now. It’s a catchy song with a big chorus that makes it easy to see why it’s got a lot of airplay over in the States.

Next up is Ease Your Pain, which is a song that slows things down a little from the opening two numbers. Again Nail showcases his smooth vocals in a song about being there for someone and helping them through hard times.

Girl Crush songwriter Lori McKenna is the next guest star on Home. This is a song that I’ve really begun to love early on. It’s a soft and tender song with a beautiful piano intro. The two singers vocals work together wonderfully and sing a heartfelt story of how you’ll always have a safe place to go.

The next song is one that surprised me when I first heard it. Many may recognise it as a song cut by Lady Antebellum on their 747 album – Lie With Me. Nail does a fantastic version of the tune and manages to give it a slightly harder edge than the Lady A version which is great to hear. It’d be such a shame if it was like for like.

He’s been doing the rounds this year as a guest star on albums with Chris Young and more and here pops up Nashville legend and awesome picker Vince Gill. I Won’t Let You Go is another heartfelt and personal song. It has a fantastic slow bluesy intro that is clearly helped by Mr. Gill who also adds some great backing vocals. The song is about being in a relationship for a long time but sticking with that person because you can’t live without them “I know that this is hard to do, you loving me, me loving you, so long since we’ve felt brand new, but I won’t let you go”.

The title track Fighter is up next. This is a song that I, and I’m sure a lot of other people, can relate to. The opening line “Don’t think that I don’t see the way you struggle, watching me struggle” strikes a chord with me. Again, it’s a song based around relationships and persisting with the ones that matter because the people in them with you matter. This is a very honest track and it’s clear that Nail was doing some soul searching during this record.

Babies is a song about how life changes for the better when you have children of your own. Again, Nail is clearly singing from a very personal place having lived these songs himself.

Things pick up slightly again with Got Me Gone. It’s a song about someone taking your breath away and knocking you for six. Decent album track.

Champagne Promise is the penultimate song on the record and is a relaxed and laid back song. Nail’s vocals really lend well to this type of song. It’s a sweet tune about appreciating the beauty of a loved one and knowing that there’s no way that you can hold yourself back from falling for someone.

The final song on the album brings with it the final guest appearances in Bear and Bo Rinehart. Old Man’s Symphony is an acoustic driven song where Nail tips his cap to his father and all that he has done to inspire him in wanting to be as good as him and being scared of trying to keep up to his standards. It’s another heartfelt and personal song that is the perfect end to the record. 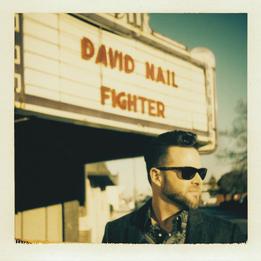 This is a very strong effort from David Nail and is definitely one worth listening to. There’s a nice mix of the upbeat and heartfelt songs on the record which makes it an interesting listen. It speaks volumes as to how well respected David Nail is in the industry when you look at the eclectic list of guest stars who all bring something different to the table. The most important thing about this record for me is that it’s personal. This is what always sets my favourite albums apart they either do something different or they do something personal and relatable and with this album David has hit the Nail right on the head (I’m so sorry for that!). Hopefully the strength that Nail shows in this album will help other sufferers of depression become Fighters.