Dexeter are the next in a long line of British country acts that have released albums in the last twelve months. Ward Thomas kicked things off followed by The Shires then Sasha McVeigh (with a few more in between). Our friends at Think Country Promotions, who have been kind enough to let us have a listen, are supporting Four Thousand Miles to Nashville.

The album kicks off with Breathe. The song relies heavily on Deanne’s vocals with some fantastic harmonies supporting this. Musically it is sparse and doesn’t over do things. There is a great slide guitar solo from Gareth in the song that adds great atmosphere. My one criticism is there is a section where the music stops as Deanne sings that seems like it is out of time and feels a little uncomfortable.

Track two is Mirror. This kicks off with an almost Wild West bass line and guitar. As the vocals kick in there is a dancing pedal steel and fiddle in the background. The vocals aren’t overdone which could have killed this song. It’s not always easy for the British acts that don’t have that ‘Country twang’ to get the vocals right – The Shires overdid it and tried to ‘out sing’ each other for me but this is balanced nicely.

Meet Me There sounds like it could have come straight from a Music Row writer’s room. It has a great sing-along chorus and a feel good vibe that would fit with any modern country artist.

Getaway Car is similar to the previous tracks in that it’s mid-tempo with a big chorus. It’s clear by now that Deanne’s vocals are being put front and centre on the album – they feel louder and clearer than the instruments being played in support. This isn’t necessarily a bad thing however as there are some breaks for guitar solos such as the one on this song.

With Falling we have a more heartfelt ballad in which we can feel the emotion oozing through the speakers from the vocals.

The title track Four Thousand Miles (To Nashville) is another British ode to Nashville in the same vein as some of the other British acts have produced. I’m never a huge fan of this subject matter – I feel like maybe it makes the British acts look like they’re wide eyed and in awe of the American scene.  It’s a decent enough song about following your dreams and not giving up.

Slow it Down is a moody and slow number. It’s musically very simple again but this only adds to the mood and gives Deanne a chance to show off her soulful voice.

Older (Wouldn’t Change A Thing) is a song which has become a live favourite with fans of the band. With it’s driving rhythm and vocal harmonies you can see why fans sing along at the live shows. It builds to a crescendo of an ending (which admittedly does feel a bit like you’re accidently hitting the volume button) and is one of the more ‘punch packing’ moments on the record.

The last track on the album is House of Cards which opens with some rootsy and bluesy guitar work along with the usual vocal harmonies. It’s a song which you expect to pick up and suddenly kick in at any point but this doesn’t really happen. 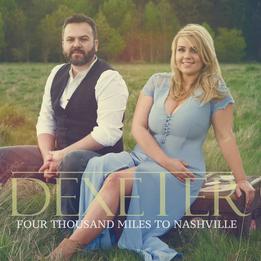 It’s often hard to judge a country album from one of the UK acts. I find myself torn between looking for something that doesn’t try too hard to be American but also retains the elements that make it country. This album certainly has its moments of country but for the most part doesn’t feel much like a country record – this doesn’t have to be a bad thing however. The vocals are soft, smooth and soulful as well as being fantastic but they lack a country attitude with them. I do love how things aren’t too polished and over produced as with some albums however at times there seem to be major slip ups in production that make it sound a bit ‘homemade’. The album has some great tracks on it but for me it just lacks a couple of songs that pack a real punch. All in all it’s another promising record from a band that will only get better.

Meet Me There, Getaway Car, Older (Wouldn’t Change a Thing)