Ever since 2014’s Riser Dierks Bentley has solidified his place as one of country music’s biggest stars. The release, which included I Hold On and Say You Do as well as mega-hit Drunk On A Plane, led to a huge worldwide tour as well as a presenting spot at the ACM Awards and more. Black was introduced over a number of weeks through the release of a series of intense cinematic videos that built the tension for this.

The album kicks off with the title track Black. This moody and sexy song sets the tone for the album as Dierks sings in his typical low pitch with a slow burning backing including some U2-esque reverb. This song is a great opener, not just for the record, but I’m sure for live shows too.

We go from the slow burning opener straight into the more upbeat Pick Up. The song is fast, hard-hitting and desperate in its lyrics. It’s definitely one of my stand out favourites on the album. The overdriven guitars and heavy chorus make this song an example of the rockier side of Dierks music that I love.

The latest Nashville superstar in the making, Maren Morris, appears in the third song I’ll Be The

Moon. This is a lyrically heart wrenching track about being the one stuck on the outside of a love triangle. Much like Pick Up before it the lyrics are desperate and heart breaking. Morris vocal adds a great extra texture to this song. It’s surely going to be a single. The line “tomorrow you’ll be waking up beside him, telling him you love him, but you still see me” sums up the story of the song.

Track four is the slightly more fun What The Hell Did I Say which tells the story of something that we’ve all experienced when you wake up in the morning after a night on the alcohol and have no idea what you did. The song takes Dierks enjoyment for writing  and performing drinking songs and sends it to the ‘next day’ level. It’s a catchy number with a big chorus.

The first single from the record was Somewhere On A Beach. This song could almost act as part two to Drunk On A Plane in telling the story of a jilted man on holiday alone and moving on. It’s not a song that immediately grabbed me personally; it has less fun and catchiness than Drunk On A Plane with slightly more shallow lyrics.

The next song on the record is the slightly more laidback Freedom. Dierks played this song on his recent UK tour and it received a good reaction. It’s basically a song about wanting to live free whether it be driving your first car to having money. It’s a decent album track but doesn’t blow me away.

Dierks slows things down a little for the heartfelt Why Do I Feel. This is another desperate love song about feeling like a loved one is slipping away. Again, the depth of the lyrics in this song is what really makes it for me. The storyteller in the song is a relatable to those of us who tend to self-sabotage. Great song.

Roses and a Time Machine is a song that, at least from the title, made me think it seemed a little cheesy. Once you song kicks off you can tell that it’s another fun Dierks song about wishing you could go back and fix the mess that you made. It’s a little more lighthearted but still retains the deeper message that this album is trying to get across.

All The Way To Me kind of chugs along at a moderate speed and doesn’t really grab me much. It’s a song about the things in life that you love and how they make you feel.

Elle King pops up on Different for Girls to add a vocal. This is a song about how women can’t just go out drinking with their friends to get over a man. Elle’s unmistakable vocal gives the song a different feel that is great. “A gets drunk with his friends and he might hook up, fast forward through the pain, push them back when the tears come up, but it’s different for girls” sums up the story of the song. It’s really catchy and has to be a single.

We have another guest on the New Orleans jazz influenced Mardi Gras in the form of Trombone Shorty. It’s really nice to see Dierks embracing collaborators from outside the country genre. It’s another song that doesn’t really grab me too much but it’s got a fun feel and the brass section makes it quite interesting.

Possibly my favourite song on the album is up next in the form of Light It Up. It’s a song about finding someone in life who helps you get through the hard times when you’re fighting with your own demons. It has a huge chorus and will surely be a live favourite. My favourite Dierks songs are always the ones that hit you hard lyrically and this definitely fits into that category. It’s a great song. “You light it up, shone some faith on my darkest places”.

The album finishes on the slightly rootsy and heartfelt Can’t Be Replaced. It’s a wonderful end to the album with some fantastic slide guitar. Dierks even manages to slip in a line about his faithful dog Jake “for 15 years right by my side, from a single man to three kids and a wife, friends come and go but when it comes to Jake, there’s just some things that can’t be replaced”. It’s a heartfelt message at the end of the album from a performer who always bares his soul on his records. 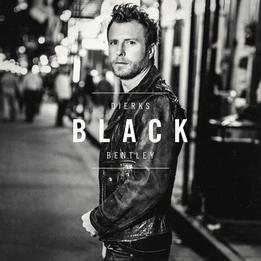 I didn’t really know what to expect from this record. When Somewhere On A Beach was released I was initially worried. Riser was such a personal and raw album from Dierks and that’s what really resonated with me – the last thing I hoped for was a sidestep into the more ‘bro country’ sounds around Nashville. For me, Black is a mixed bag. It’s a really good album and has a handful of songs which could be big hits on it for instance I’ll Be The Moon and Light It Up but is just let down by one or two songs which don’t really grab me in the way I’d hope. Then again I can’t help but wonder if Dierks is the victim of his own success – if anyone else released this album I’d love it but I can’t help but hold Dierks in such high esteem.

Pick Up, I’ll Be The Moon, Light It Up, Can’t Be Replaced