ERIC CHURCH surprised us all with the release of his latest album Mr Misunderstood in November 2015. It was released to his fan club for free before its public release, without any fanfare, which I think was a nice touch. Mr Misunderstood is Church’s fifth studio album following back to back Billboard number 1 albums with Chief (2011) and The Outsiders (2014). Mr Misunderstood didn’t disappoint in the charts peaking at number two on the Billboard chart selling close to 300,000 copies in the US.

The album starts with the title track Mr Misunderstood and your first challenge is to not just listen to this song on repeat, which is very easy to do. The tempo change catches you out and you will be humming the tune in your head very quickly.

Mistress Named Music has a stripped down Country Rock feel as it builds into an amazing instrumental that will lift the roof off any venue.

Chatanooga Lucy is probably my favourite song on the album. It’s a hard one to describe but I can guarantee it will get you up dancing along, it is another up-tempo song with a mix of country and blues, fingers crossed it doesn’t get covered as a pop or dance song.

Mixed Drinks About Feelings features vocals from Susan Tedeschi, not a name I am familiar with but we are used to this with Eric Church. Tedeschi adds some good vocals to a moving track.

Knives of New Orleans has some very powerful lyrics, adding another mix to this album, of a man on the run and resigning himself to his fate, which seems to be a common theme with several Country artists at the minute, which I’m sure would have Johnny Cash smiling from above.

Round Here Buzz is a track that is growing on me the more I listen to the album, it doesn’t stand out first but there is something about it and having read several reviews many are tipping this as a potential future single

Kill a Word has some very powerful lyrics about bullying and is a very well written track.

Holdin’ My Own if I’m being honest is one of the tracks you won’t really notice on the album and like Round Here Buzz will take some growing on the listener. I would put this as one of the weaker songs of the album.

Record Year will have you swaying along with a smile on your face. It’s nice to see a country artist reflecting on some positives

The ten track album is finished with Three Year Old which shows the innocence of children and I’m sure any parent will appreciate and have a smile at the lyrics in this song including my favourite line of the album “You can be a cowboy on the moon, Dig to China with a spoon”. Admit it we all tried that once!

As Church returns to these shores in just a few months’ time to close Country to Country at the O2 I hope his set doesn’t resemble a greatest hits show and he makes room for several songs from Mr Misunderstood as they will be a fitting end to what is sure to be a great weekend. 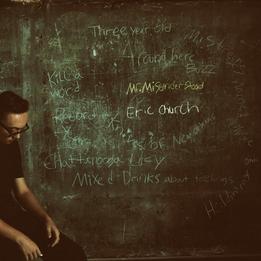 Overall
This is an album I would recommend listening to from start to finish as like previous albums by Church it doesn’t disappoint.. 2015 was a big year for Church with CMA nominations for Entertainer of the Year and Male Vocalist of the Year and I think off the back of this album the awards will be coming thick and fast.