Frankie Ballard came into this second album of the back of the successful Sunshine & Whiskey that produced the hit single of the same name. Frankie has always been a bit of a guitar slinger with the ability to have a slightly harder edge to his sound than some. This album was made particularly more interesting by the fact that Frankie headed out into the Texan desert to record it.

The album kicks off with the rocky El Camino. It’s a typical Frankie Ballard song with a strong guitar riff through that almost sets the stall out for the album. The song is about jumping in the car and heading somewhere that you’ve never been before to move on from someone. It’s got a big chorus and a really rocky sound.

The next song is kicked off with another guitar riff in Cigarette. This is a real mid-tempo rocker that kind of stutters through. It has the same riff throughout with Ballard’s characteristic husky vocals.

Next up is one of my favourites on the album in Wasting Time. It’s kicked off with a nice acoustic intro before it kicks off into a big chorus. Lyrically it’s about offering to be there for someone. The lines “if you’re kind of pissed off I’ll help you cuss it, if you want some small talk girl let’s discuss it, if you’re feeling lonely you’re not the only one walking that line” get stuck in your head from the get go. It’s a great up-tempo rocker.

Ballard moves into somewhat more rootsy territory with Little Bit of Both. It kicks off with some cool acoustic slide guitar and grooves nicely throughout. It’s another with a foot stomper of a chorus. On top of the acoustic we get a brilliant electric slide guitar solo. The song has hints of blues, funk, country and more. It’s just pure cool.

LA Woman is a great country blues rock number. Again, it’s a real nod to the amount of influences and styles on offer on this record. It has a big intro, a twelve bar blues in the verse and a sing-a-long chorus. The sound on this one is big with the driving guitars met by thumping drums and some keys flitting in and out. It’s one to be played live.

Next is the first single from the album in It All Started With A Beer. This song is considerably more laid back than others on the record so far. It’s a nice break from the driving rock that we’ve heard so far with a dreamy feel and picked acoustic guitar.

We are back in to the more rocky side of things with Sweet Time. It’s another song with an almost 80’s rock Bon Jovi style big chorus. This song is one that’ll surely get the lighters in the air at shows!

Good as Gold is another song that I’m really enjoying in the early days of listening to this album. It’s a song about someone else being able to provide much more for someone in material possessions but knowing that you can give more in every other way. It’s a great song and another really lyrically deep number from Ballard. Oh yeah… the guitar solo is awesome too!

With Southern Side things take a slightly more funky turn. On this record Ballard certainly seems to have found a little more poetry and rhythm in his vocals and this certainly shows on this song. It’s a great upbeat and fun number celebrating the ladies of the South!

You’ll Accomp’ny Me (apart from being a nightmare for an Englishman to spell) just maintains the quality that we’ve seen from the rest of the album. It slowly builds at the start to another big chorus. At this point I’m really starting to wonder if this album will have a bad song?!

The record is finished off by a song that is possibly my favourite Frankie Ballard song with the tender and slow You Could’ve Loved Me. The song is a deep acoustic number that looks back on a failed relationship and accepting that it never could or will work. The line “I’d be lying if I said I didn’t have any regrets, I just know it has to be this way because I’m still exactly who I was” hits home. It’s a truly beautiful song. 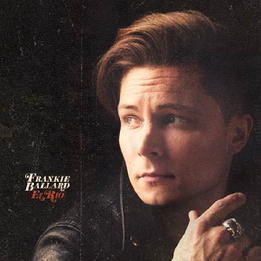 When I heard Frankie Ballard was releasing his second album I was intrigued. I enjoyed Sunshine and Whiskey without really falling in love with it but could tell there was a lot of potential. El Rio is the sound of a fantastic musician and songwriter fulfilling that potential. The album is almost perfect in its complexion from start to finish. Rocky songs like LA Woman are perfectly matched with the more sensitive side such as You Could’ve Loved Me. There are big guitar riffs, rootsy slide guitar, country acoustic songs and lyrics with real depth that deserve to announce Ballard to the next level of country music. In a month where Blake Shelton and Dierks Bentley have both released new albums Ballard doesn’t only keep up with the old pros but maybe just out does them…