I have followed Jess and The Bandits for some time on Twitter, when her Twitter was just plain old Jessica Clemmons. If you like country music in the UK you find that you get added by just about everyone with the thinnest connection to country music. “Hey our album has a banjo on it for 15 seconds on track 3, follow me bro!” The majority you see straight away that they aren’t your cup of tea, the remainder you put on a list to listen to in the future. Jessica Clemmons and latterly Jess and The Bandits are long standing residents of that list. Sorry Jess, and indeed, The Bandits, I am lazy, ask my wife, and she will point you to a picture that I said I would put up since Christmas Day.

This month sees the release of the debut album by Jess And The Bandits, Here We Go Again. Jess, Houston native, but seemingly spends a lot of time on these shores, to the point your writer believed she was in fact British. Not to be, Texan, and don’t we know it. The image of Texas for me is in your face confidence and from the opener Jess is confident in what she is delivering, Ready Set! A ballsy stomper in the vein of Carrie Underwood. The difference with Jess And The Bandits, is I liked its call to arms where my current tally of Carrie Underwood songs I like is one.

Jess moves ahead of Ms Underwood on Love Like That, a solid country love song, delivered flawlessly, with impeccable musicianship from The Bandits, this review is not going to be a chore at all. Two tracks in and the quality is outshining most of what I have heard this year from country music. Love Like That could be one of the standouts from the album. It seems to nod to Jennifer Nettles for me, as does You Can’t Stop Me. I see a big Sugarland influence on this album, which is no bad thing. Sugarland are missed greatly.

You Can’t Stop Me, a beautiful track, and recent single, it is a great advert for the album and an indicator of the quality on this release. The songwriting, the musicianship, the production and the delivery make it a joy to listen to.

With Wanted Man, Jess is channelling her bad girl and reminds me of Carrie Underwood, again, more attitude than tone or material. Jess ain’t no tribute act. The reference points are just that. She isn’t Miranda, Carrie or Reba. She sounds like a product of her environment but certainly her own person and Wanted Man gives the feel of Something Bad from Miranda Lamberts’ Platinum. Confident, strong and highly polished.

Nitty Gritty and fellow Texan Miranda Lamberts’ Fine Tune guitar immediately springs to mind, it’s not Fine Tune though, it’s a song of being yourself and being confident in yourself. The country relative of TLC’s Unpretty. It’s easily a contender for best track, future single and breakthrough track. It’s a wonderful tune. I am not going to waste superlatives on you. Seek it out.

If You Can’t Be Mine, shows The Bandits, Dave, Ricci, Steve and Louis talents off. A beautiful building track with a fantastic pedal steel sound flowing through its entirety. It’s another standout track. Maybe Jess is right for my mood on this bank holiday morning, but on the slowed down What If, she reminds me of Kimberly Perry at her very best and that is a compliment to both singers. A lazy compliment, but I did tell you I was lazy in the first paragraph. Jess just has a strength in her voice that is lacking in a great deal of her contemporaries. What If demonstrates this perfectly, a fantastic ballad that would tax some of the best vocalists, seems effortless and easy to Jessica Clemmons.

I always see the music that I love as summer soundtracks, the unpretentious nature of country music lends itself to the sunshine, and My Name Is Trouble encapsulates that without the literal need that some artists feel they have to demonstrate. As she says I know what you like and I like this.

Drunk On Me and I am aware the end is nearing for this album. It feels criminally short, it feels over before its time and shouldn’t the quality dip near the end? Isn’t there a rule to have the best songs within the first seven tracks. Getting Into Something indicates that Jess and The Bandits weren’t aware of this rule. If you told me this was a Blake Shelton track, I would nod and probably agree. Its polished, it oozes quality.

By the title track, Here We Go Again and I think I have the measure of Jess’s voice and I am reminded of Chris Young’s depth. She has a strength that I am struggling to define, that’s no bad thing. I repeat, she has her own voice. Perhaps Here We Go Again, for a second reminds me of Chris Young’s Tomorrow. Both beautiful love songs and both great voices.

Single Tonight and we head into bawdy honky tonk territory. I like this territory and again the musicians are allowed to shine, and Jess has a little fun. I suspect this is a very popular part of her live show. A great end to the album?

No, another track, a cover? A cover of a legend? A cover of a signature song by a legend? Wichita Lineman, stripped down, respectful but again confident in what she can do with the song. Fantastic end. 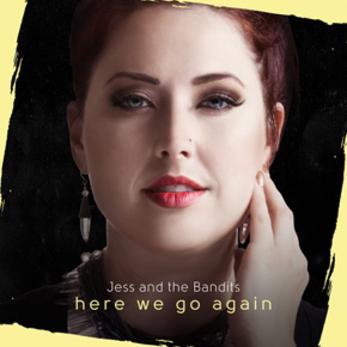 8. My Name Is Trouble

Overall
I have enjoyed this album immensely. The measure of it is part way through this review I stopped, logged onto Amazon and purchased a physical copy, and also the albums recorded under Jessica Clemmons. It’s a fantastic album, very strong, its modern, polished and it should have the same breakthrough success afforded to The Shires and Ward Thomas. It has the songs, it has musicianship. It’s a thoroughly enjoyable album. Curse my laziness that stopped me listening to her sooner, who knows I may put that picture up today too.
Recommended Tracks