With the outstanding worldwide success of her debut album Same Trailer Different Park, critics and 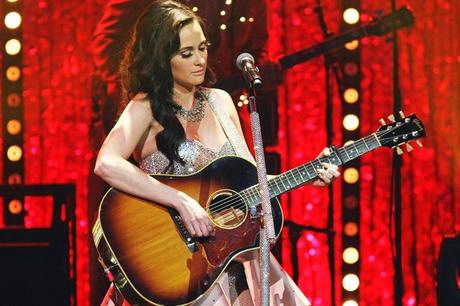 country music fans alike waited in anticipation for her follow up album. In the summer of this year the

wait was finally over, with Pageant Material  being released. The album was well received, being

nominated for Country Music Association Award and achieving chart success throughout the world. It

was time for the London stop of the her European Tour at the world famous Royal Albert Hall.

After a good warm up act in Sugar & The Hi-Lows it was, what felt like, an incredibly long wait for Kacey to

take to the stage. When she did arrive, she was met with a wall of cheers and general appreciation.

Opening with the title track of her current album, Pageant Material, it was time for the fans to settle in for

a night of high quality entertainment. The name of the show was ‘Kacey Musgraves’ Country and Western

Rhinestone Revue’. The look and feel of the show certainly lived up to its name. All the band members,

and Kacey herself of course, were sporting pink with rhinestones on all garments along with glitter and a

generally sparkly theme throughout. Many fans were getting into the occasion by wearing tiaras, along

with other available merchandise. It really felt like a fan club event.

After playing Biscuits, a track from her latest album, she played Silver Lining from her first album. At this point, fans felt able to clap and sing along because they knew the song. When Kacey played a new number fans mostly fell quiet to really listen to the track. A point that Kacey remarked on, and expressed her gratitude for. As well as remarking on this, Kacey spoke of her delight and disbelief that she was playing the Royal Albert Hall, in her opening conversation to the crowd. When Kacey spoke to the crowd,  she did so with such ease, demonstrating a very humorous and witty personality. An attribute that works to her credit. She returned to the music with Mamma’s Broken Heart, an award winning song which she proudly co wrote for country superstar Miranda Lambert. Kacey has always stated in interviews, that she is very keen and happy to write for others as well as herself. This was arguably a very clever song to play, as it would strike a chord and win favour with any first time attendees to the concert.

Kacey then slowed the pace of the evening down a tad, by playing the mellow sounding Fine. She then restored the tempo of the evening back to its bouncy state by playing Dime Store Cowgirl. This song went down particularly well with the crowd as it contains the lyric “..seen the white cliffs of Dover from the shore”.  This lyric was understandably well received due its British connections. During the instrumental part of the song Kacey told the story of how the song came to be. Commenting on how a woman criticised her for wearing her Stetson hat incorrectly at an event. Kacey then said “she said that and now I’m here singing a song about it!” which was met with a lot of cheering and applause. This was a lovely moment as it showed her fans that Kacey believes in her own philosophises that she sings about in Follow Your Arrow for example, that you should be who you are and not care what anybody else thinks.

The evening then took a rather unusual and original turn with Kacey hosting a talent show. This involved Kacey’s band members demonstrating the talents they possessed beyond that of music. This was a very clever idea, as it allowed Kacey to introduce the band and give them each a moment in the spotlight. The talents displayed ranged from juggling to making whisky disappear (by drinking it!). It was a welcome and enjoyable change from the traditional method of introducing the band towards the end of the gig.

Returning to the music, Kacey played Family Is Family. The song advocates that regardless of what you think of your family, at the end of the day they are important. This song, along with many others played on the night, demonstrates Kacey’s wonderful wordplay, humour and wit. This can be arguably best seen in the lyric “they may smoke like chimneys, but they’ll give you their kidneys”. Kacey’s ability to write such lyrics is perhaps why she is seen as a breath of fresh air by some country music critics.

During another conversation with the audience, Kacey talked about her love for Britain and British culture. This involved her discussing Britain’s love for tea and jammy dodgers (a term she tried to say in her best British accent).  This was met with laughter and warm applause. It seemed only appropriate that she perform Cup of Tea at this point, which she duly did.

Kacey and the band then performed Coldplay’s Yellow. The concert contained a couple of other covers which were No Scrubs by TLC and These Boots Are Made for Walking by Nancy Sinatra. Kacey’s cover of Nancy’s track is becoming a regular feature of her shows. It is interesting to observe which songs she chooses to cover and how she performs them.

The band then left stage to allow Kacey to have some one-to-one time with her fans. During this time she discussed performing at this year’s Royal Variety Show and high fiving HRH Prince Harry. Kacey appeared to be very proud and honoured by this request. The conversation then took a rather emotional turn when Kacey thanked us all for turning up, and selling out the concert in the process, in the wake of the Paris terrorists attacks. This moment was rather emotional to watch as a fan, but understandable in the circumstances. Kacey ended the segment by playing Merry Go Round.

The band returned and they played a mixture of old and new tracks, including Late to the Party and one of her biggest hits, and concert favourites, Follow your Arrow. She then left with the band and was urged to return for an encore. When they all returned they performed Happy Trails, an acappella number that wishes safe travels to all until we meet again.

It was a thoroughly enjoyable evening, and the perfect warm up to her debut C2C performance in March. With a solid UK fan base and the capacity of venues increasing with each tour she does, there is little doubt that Kacey is a UK favourite and will be touring here again soon.

Check out our review of Kacey’s album Pageant MaterialHere