It’s hard to believe that it’s been three years since Kip Moore stormed on to the country music scene with his debut album Up All Night. In that time Moore has spent time on the road, most recently supporting Dierks Bentley on his Sounds of Summer tour, and even found his way over to Europe to play shows in the UK and Scandinavia as part of the Country 2 Country festival.

For many acts their sophomore album can be make or break time. Are they one hit wonders or do they have the talent to keep turning out the same quality? From the songs that he has played live and the level of the show he can put on we would expect Wild Ones to be a stellar follow up.

The album kicks off with the title track, Wild Ones. Moore has been opening shows with this song and it was one I personally was looking forward to. It shook the O2 Arena to it’s rafters in March so I couldn’t wait to hear it on record. It’s a slow burner of a song that pulls no punches in introducing you to this new album. With the heavy guitar lines and extra gravel in Moore’s voice we know straight away that this will not be Up All Night part 2.

The second track on the album is Come and Get It. It has the same driving guitar lines and Springsteen-esque vocals. It’s a song that plods along before it ends with a jam that sounds like it could have come straight from a live album.

Girl Of The Summer is becoming one of my favourites on the album. It’s probably the most similar to anything from Kip’s debut album. It comes across as a bit subtler than the opening two songs and has a brilliant and epic chorus. Great stuff.

Magic is another big, epic song. This album feels like it has been written with large arena and stadium shows in mind. When I recently spoke to Kip he talked about how most songs were written in sound check and you can feel that here.

That Was Us slows things down a little. I’ve always enjoyed Kip music when it goes laid back such as Hey Pretty Girl and Faith When I Fall. This song really let’s Kip’s voice take centre stage and shows off how strong it has become.

Next up is Lipstick. Opening up with another live sounding intro it breaks into an almost 80’s rock sounding number. Kip name drops many of the places he’s been and he mentioned the reason for this as being that the album was inspired by life on the road.

In What Ya Got On Tonight we are treated to the most ‘country’ song on the album so far with it’s acoustic guitar and twanging lead guitar. The chorus makes you want to get up and dance. This is another of my favourites on the album – it’s impossible to sit still and feel sad listening to this track. Great stuff.

Hearts Desire is another song that gently ambles through the choruses but has a brilliant sing-a-long chorus. I can almost hear the fans singing this back to Kip at live shows already.

Complicated is another uplifting and big song that has a chorus that gets the hairs on the back of your neck standing up. The drums are big and booming and this song is made for being played live. It has a great guitar solo too.

The lead single from the album is up next. I’m To Blame. This is another song that automatically

feels a little bit more ‘country’ than the rest, possibly due to the rolling banjo throughout. It’s a

great lead song from the album and lyrically is full of the badass attitude that we love from Kip. My

only criticism is that, at 2:20, it’s a little short. You can never have too much of a good thing…

That’s Alright With Me is a mid-tempo song about loving women and whiskey. It’s standard country

fayre.
With Running For You we have another slow song with a big powerful chorus. It’s become clear that

The album closes out with Comeback Kid which starts off with a piano intro and Kip’s gravelly voice.

It’s reminiscent of Faith When I Fall which closed out Kip’s previous album and makes you feel like he saves his most raw and open songs for the end of the album. 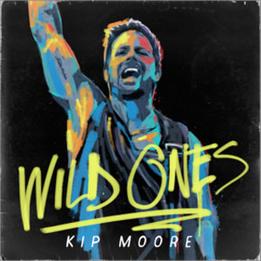 3. Girl Of The Summer

7. What Ya Got On Tonight

With Kip Moore’s second album we have a completely different beast to his debut. Kip recently said to me that he never wants to repeat a body of work and he has achieved exactly that with Wild Ones. It’s an album that really embodies a lot of what Kip offers in his live show – the guitars are loud, his voice is powerful and it’s made to be played loud. The album has some great tunes on it but maybe lacks any of those slightly more ‘poppy’ country songs that catch the ear and stay in your head all day long. The album isn’t meant to be full of pop country though, it’s just Kip Moore expressing whatever the heck he likes. This album probably wont be for everybody in the country market, some will see the fact it lacks anything near Somethin’ Bout A Truck as a bad thing but I don’t. This album references so many different genres whilst carving it’s own way. This isn’t just a great country album, it’s a great album.

Wild Ones, Girl Of The Summer, What You Got On Tonight, I’m To Blame

One thought on “Kip Moore – Wild Ones Reviewed”