With the tragic events in Paris occurring less than 24 hours before the gig, and acts 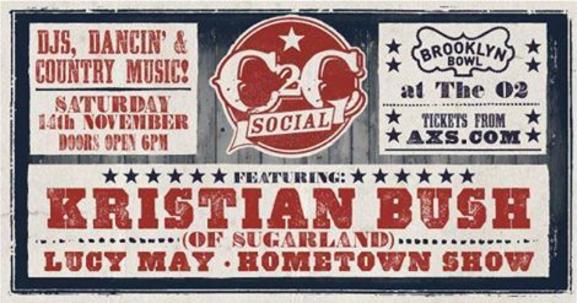 such as Brantley Gilbert postponing his European tour, it was questionable whether

the inaugural C2C Social would go ahead. After a tweet from headliner Kristian Bush,

of Sugarland, saying that the show must go on, fans flocked to the O2’s Brooklyn Bowl

Before the first live act, there was a 90 minute spot from the resident C2C DJ Baylen

Leonard, who played old classics, such as Applejack by Dolly Parton all the way through

to modern hits including Kip Moore’s I’m to Blame. With the decor of the venue looking

like an American Bar combined with the music blaring through the speakers, one

could be forgiven for thinking they were in the heart of Nashville. It was a splendid start

After this musical warm up, UK’s very own Hometown Show took to the stage.

Comprising of Matt on guitar and lead vocals, Louise on backing vocals, Josh on bass and Trevor on harmonica, Hometown Show are an old time/bluegrass outfit from Portsmouth. Opening their set with Carolina, an original track that after a slow introductory instrumental explodes into  up tempo song featuring amazing solos from all the musicians and has tight harmonies throughout. This song clearly won over the crowd. After a couple of other originals of a similar sound to Carolina they played the arguably modern classic of Wagon Wheel by Old Crow Medicine Show. There were not many audience members that weren’t singing along and enjoying the song. After a few more covers and originals, they closed their set with Last Whistle Stop, an original song with a twist. The twist being that halfway through the song they played a medley of well-known songs from all musical genres to the melody of Last Whistle Stop. The songs featured in the medley were from artists including The Rolling Stones, Taylor Swift, Mark Ronson and One Direction! With every different cover, listeners were intrigued to hear what was coming next. Hometown Show was a great opening act and well worth a watch if you get the chance.

After another brief spot from the DJ it was Lucy May’s turn to perform. Lucy May is also an English artist who has enjoyed success by having songs appear in the Radio 2 Playlist. Lucy’s sound is very modern and current for the country music scene. If you were to listen to her sing you would not think she is English. With a very good backing band behind her, Lucy opened her set, comprising of all original songs, with Whirlwind, a fast paced song with a modern country sound that talks about love being like a whirlwind. Lucy demonstrated that she can sing a slow paced song such as Rosemary Lane equally well as fast numbers. Lucy varied the tempo of songs throughout her set which worked very well. Lucy paid tribute to the victims of Paris with her song Hole in my Heart, a song that was a fitting tribute both in words and sentiment. Lucy’s variety of songs  makes her a well- rounded country artist flying the flag for British solo country acts.

With the capacity of the venue steadily increasing thought-out the night it was time for the eagerly awaited headline act Kristian Bush. Kristian was joined by his brother Brandon, who himself is a member of the band Train and has recorded with artists as varied as John Mayer, on keys. For those who were expecting a full band set this was not the night for it with just Kristian on acoustic and Brandon on keys filling the stage.

Given the previous two acts were British it became very clear, very early on that Kristian wasn’t. One of his opening remarks was “for the next hour or so your asses are mine!” This set the tone for a very different kind of show to the previous two acts. Having played at C2C Festival 2013, Kristian clearly felt at home on stage in UK. Opening his set with Make Another Memory the audience were instantly clapping and singing along. This atmosphere continued throughout the set and seemed to increase in volume with every passing song. Kristian would constantly involve the audience, to their great delight, by asking them to dance along or sing, or in the case of Baby Girl, he recalled the story of how he wrote the song for his daughter but does not want her to know what the song is about due to the subject matter being that of sex. These anecdotes and stories only increased his popularity and fan base. Other songs featured in the set were Flip-flops, Stuck Like Glue, In My Headphones and the seasonal number Thinking About Drinking for Christmas, during which he suggested that Britain starts their Christmas celebrations earlier than the Americans do, which again was met with roars of laughter. Finishing the set with a cover of Bruce Springsteen’s Atlantic City it was a fantastic end to the evening’s live music.

The night was rounded off with what can only be described as a country disco. With the DJ back at the decks playing more country songs through the ages and people constantly putting in their requests. It was clear for all to see that everyone was having a wonderful time by dancing be it country jiving or impromptu line dancing, meeting new people or catching up with old friends and washing it down with a drink or two. A fun night was had by all. It proved that music won and, considering the tragedies in Paris, the terrorists never will.