I should start this review by saying if you’re of those people who is full of pent up anger towards the so-called ‘bro country’ artist then now would be the time to turn away. The phrase “but it’s not real country” is becoming one of the most irritating things to hear when people speak of Luke Bryan, Florida Georgia Line, Jason Aldean and many more. It loosely translates to “I’ve only heard Johnny Cash. This doesn’t sound like Johnny Cash…” No, it doesn’t, because it’s music evolved from various different modern and classic influences. If it sounded like Johnny Cash then you’d say “but you’re just a cheap imitation of the man in black…” and we’d be going round in circles. Rant over.

Kill The Lights is the highly anticipated new album from the reigning CMA Entertainer of the Year and comes hot on the heels of the award winning Crash My Party. I’d been looking forward to this for a while now even more so since Bryan announced his last ever Spring Break shows and accompanying records. I’d been left wondering what Luke had planned for us next and how his music might evolve.

The album kicks off with the lead single Kick The Dust Up. It’s not too far away from the Bryan sound that we are used to with its lyrics about small town parties in fields on a Friday night – in this sense it could almost be a follow up to That’s My Kind of Night. Musically it has a strong banjo riff and drives along nicely. Luke has been opening his recent tour shows in the States with the song so it’s clearly a favourite of his.

The title track Kill The Lights kicks off with an intro that sounds like it’s been lifted straight out of the 80’s. It’s a funky and upbeat tune that has a big chorus. It doesn’t have many ‘country’ elements but it’s a great song. It almost feels like Luke is channeling his inner Lionel Richie.

Strip It Down takes a turn into piano-led balladry. According to many reviews it’s a ‘sexy’ song… I’m not sure I’ve ever called a song sexy but ok I’ll go with it. It’s basically a number about about having sex (come on, we’re all adults here). It’s a decent enough slow song but really does nothing for me.

Little Big Town’s Karen Fairchild lends vocals to Home Alone Tonight, perhaps so both parties could mutually benefit and capitalize on her Girl Crush success. The song features two of my favorite vocalists but the question-answer style of the lyrics and lines like “Put your camera up, flip it around and take a payback picture, (Karen) I’ll send it to my ex, (Luke) I’ll send it to my ex” made my cringe a little in all honesty. It feels like a waste of two great voices to me.

Razor Blade shows real steps into more mature territory for Luke Bryan. It’s an epic song with a thumping bass line throughout. It’s heartfelt and, as with most Bryan songs, has a catchy hook in the chorus.

Fast is a mid tempo tune about life passing us by quickly. It fits with the reflective mood set earlier this year with Spring Breakdown and could all be part of Bryan realising that the years are catching up with him and he’s not a youngster any more (for the benefit of anyone over 40 – I don’t think he’s that old!).

One of my favourite songs on the album is up next in Move. It’s got a brilliant driving guitar pushing it along. It’s one that should be played loud to be enjoyed at it’s best. This one has to become a live favourite. Great stuff.

Just Over is a little more classically country sounding (cue people screaming “What?! That’s not country!”) With it’s acoustic guitar intro. It’s got a great sing-a-long chorus and tells a heartbreaking story of a place we’ve all found ourselves at some point or another. One thing has become clear at this point; this album is chock full of catchy, pop country, radio friendly tunes.

Track 9 is Love It Gone which follows the pattern of catchy and upbeat songs. I can’t have any complaints. It’s typical Bryan with it’s smooth and flowing vocals.

Way Way Back is another early favourite of mine. Funnily enough it’s similar to Move with it’s guitar led intro and it builds into a big chorus. There’s something frighteningly foot-tapping about it. It’s modern country pop at it’s best.

To The Moon and Back is the obligatory slow acoustic song on the album. Like Drink a Beer or You Don’t Know Jack it’s Luke baring his soul for a moment outside of the fun that he’s having on the rest of the album. It’s a real favourite of mine and shows a superb tender side to Bryan and adds a great extra element to the album. The slowly jangling acoustic and soft pedal steel make it a real melancholy song.

One thing that’s been clear up to this point is there hasn’t been too much mention of the familiar country motifs such a corn fields, trucks and such. Well fear no more. Huntin’, Fishin’ and Lovin’ Every Day will scratch that itch. There’s banjo and talk of “gettin’ red dirt rich in Flint River pay” to give us all our fill of Bryan’s favourite subjects and you know what? I love it. It’s what makes Luke Bryan Luke Bryan. He grew up on a farm and he loves singing about it. And it’s got a great guitar solo.

The album closes out with Scarecrows which is another reflective song. It almost fills the Dirt Road Diary slot from Crash My Party. It’s a great album closer and again hints to Luke Bryan’s feelings on growing up personally and musically. In fact he pretty much says that in a line that sums up the album “Just like the fields we all grow up”. 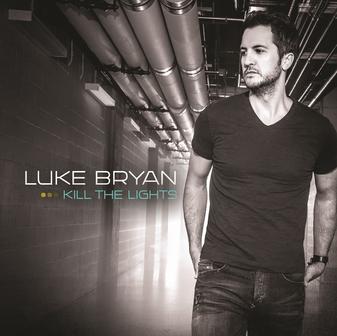 I recently read a journalist from The Guardian refer to Luke Bryan as nothing more than a ‘twerking mannequin’. This is obviously a very one dimensional view of an artist who enjoys pandering to his female fans in a live setting from a writer who thinks country music stopped when The Highwaymen went their separate ways. Kill The Lights features no more than six co-writes from Bryan and helps to show the versatility that he has – he may be CMA Entertainer of the Year but he’s also a great artist. The album is a little more mature than his other records but doesn’t lose that fun factor that Bryan’s fans know and love. At times it’s a little more pop music than country but quite frankly I couldn’t care less – a good song is a good song. If it weren’t for his smooth Southern twang a lot of the songs wouldn’t sound country at all but this all begs a bigger question – what really defines modern country? Well, that’s an argument for another time. As far as I’m concerned Luke Bryan has knocked it out of the park again with this record. It’s a nice mix of fast and slow songs. There are one or two that are a little similar and a couple that just edge on the ‘over cheesy’ side for me but that’s my only criticism. And you know what? If it makes you happy then twerk away Mr Bryan.

Kill The Lights, Move, Way Way Back, To The Moon and Back