You know in the film Old School, Frank The Tank is that middle aged guy that just wants to party with the young set, recapture his youth even though his years make him stand out and you wonder if the college kids see him as a buddy, or a figure of fun. Apropos of nothing Luke Bryan gives us his regular, but final, Spring Break offering Spring Break…Checkin’ Out.

Luke is 38. That’s not middle aged, trust me, bitterly I hark back to 38 and it was not middle age. But it’s also not Spring Break territory and that perhaps, is why Luke Bryan is releasing the last in his series of Spring Break ep’s. Maybe next year he will release, “Comfy Slippers From Marks and Sparks EP1” or “A Night In Watching Strictly – The Album”.

I of course jest. This album is made up of 5 new tracks and the 6 that made up the previous EP, Spring Break 6….I’m Getting Too Old For This. Sorry, my notes are messed up, Spring Break 6….Like We Ain’t Ever. I come to these tracks fresh as oddly, quietly, and maybe surprisingly, I quite like Luke Bryan. No really, I do, but I overlook his Spring Break releases as spring here in the UK isn’t beaches, Panama City and partying. Its rain, its cold and it’s the clocks going forward.

The first time I heard Luke Bryan was via Doin My Thing, his 2009 sophomore release. I liked it, I liked it a lot and played it a lot. This was before the behemoth Bro Country term had been coined and that time when we could just enjoy country music for its unfettered lack of pretence and love of having a good time. Then of course that changed. Country should be like it was with Merle, Willie, Hank 1 and 2, Johnny and Waylon. They would never sing about partying or girls. Never! I digress, so what of Spring Break…Checkin Out?

My Ol’ Bronco is a good starter, incidentally Bronco’s get a couple of mentions, I thought at first Luke was angling for a free truck, then Wikipedia told me it was discontinued, so he is, as his years suggest, invoking nostalgia. My Old Bronco is one of the more stand out tracks, invoking sunshine, windows wound down and roads we do not get in the UK. Co-written with Jeff and Jody Stevens. It’s one man’s love affair with a truck. This is a headline you never want to read.

Games is that stoppy starty r n b type track that your author doe not love, and this is the one that is getting the positive reviews. It reminds me of an N’Sync track. Not a specific one but if I was aware of N’Syncs material this is how it sounds in my head. What do I know. You see for this, this is what people want, anything I could say is rendered void as at The O2 in March, Florida Georgia Line and Luke Bryan figuratively blew the roof off. The brand of country that has that staccato r n b sound is what is getting people off their jacksys and dancing, and that is a good thing.

She Get Me High (Bronco count 2, namechecking rappers 0) literally has me swaying in my seat as I type this and upon first listen had me shuffling from side to side as I cursed that my train had a 10 minute delay. Its catchy, it’s got a good beat as us of a certain age might say. Again it’s a co-write with Jeff and Jody Stevens. Hmmm, I think these lads may have something. The theme continues of sunshine, fun, seaside rock and jettys. (I may have lied about one of them themes).

The mood takes a dip on songs like Spring Breakdown, Night One and Are You Leaving with Him. These are the songs that tell us that the holiday is over, all you have is memories and an inflatable crocodile. Souvenirs. These are also the songs that seem to have a lot more substance. This is an album that’s meant to be a soundtrack to a Summer, to a holiday and the holiday romances that accompany them. Luke and his co-writers have nailed that mood. Night One rightly repeats, “I wish I had met you on night one”.

It’s wrong to say there is a weak track on the album, but also there isn’t a Do I or Drink A Beer, or even a Buzzkill. Then there are tracks of a great quality in Like We Ain’t Ever. The role of these EP’s is to invoke a feeling at a set time, the frat cousin of the ubiquitous Christmas Album, and Luke Bryan is adept at this. None more so on Like We Ain’t Ever.

Overall it’s a pleasing album, it took me back to why I like modern country, it’s not pretending to be anything it isn’t. I listened to it guilt free and the day promising to get above freezing and felt good by its end. Luke Bryan has come to the end of his Spring Break with a strong release that will lodge itself firmly at the upper region of the Billboard Country Chart. People want the summer, they want a soundtrack to it and Luke Bryan has provided that. 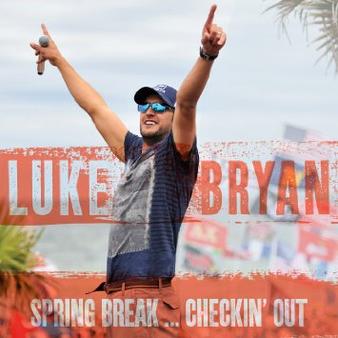 Night One, My Ol’ Bronco, She Get Me High.