Maddie and Tae released their debut album, Start Here, off the back of the singles Fly and last years ubiquitous Girl In A Country Song.

I have to lay it out now, I think Girl In A Country Song is nothing more than an average song, away from the lyrical content its similar in sound to a lot of current chart music that does little for me, it’s not bad, but it falls into clichés. I am willing to change my opinion, and I don’t hate it, I just don’t have the love for it you will find in other quarters.

It’s also worth noting that this game changer, this critique, this punctuation mark and commentary on the role of a female in the country song was succeeded by McGraw’s Shotgun Rider,  not the full bro but it’s not the genre sea change that maybe Maddie and Tae were hoping for.

Enough of one song, let’s start on Start Here.

Waitin’ On A Plain opens the album, and musically its reminiscent of Blake Shelton’s more reflective moments, vocally, close harmonies from Madison and Taylor. At times it could be Lady Antebellum, that’s the tone, initially it seems. It will be interesting to see if that is the route the album takes.

Following that is the aforementioned Girl In A Country Song and if this has managed to escape you, you don’t listen to country radio at all. There isn’t any more that I can say about this.

Smoke follows and like all the tracks on this album, it is co-written by Maddie and Tae, it’s not weak, far from it but the plaudits this album has been garnering I am still waiting for that track that grabs me, when I think of the strong mainstream albums this year has already delivered, Kip Moore, Kacey Musgraves, Alan Jackson, does this album on the evidence of the first three tracks stack up? No, but it’s not bad, it’s just well, ordinary.

Shut Up And Fish is next up on Start Here, and I am scratching my head, it seems to have me scratching my head. Its bro country, well its borderline bro country. It’s a clichéd fishing song and I am perplexed at its inclusion. I like a fishing song, Trace Adkins, Rodney Atkins, Brad Paisley, they have all produced some fine fine songs that extoll the virtues of angling. This, its massively out of place on this album.

Latest single Fly, thankfully undoes the perplexness, and it is perhaps the standout track on this decidedly ordinary album. I don’t expect an album of Fly, but Fly, its sound, its tone, its quality of song writing works for them, and it worked for me as a listener.

Sierra follows and it makes me think this album may be gathering apace, it has Miranda’s confidence, is that what was missing? Confidence? Unsure but Sierra really improves the overall album, potential single?

Your Side Of Town continues this kicking of things up a gear, a driving tune which wouldn’t seem out of place in the hands of Carrie Underwood, Maddie and Tae deliver it strongly and confidently and it’s the potential tracks that makes me think these girls may have a little more to them than just a new country duo.

Right Here, Right Now follows and pedal steel punctuates the intro, I am all for that and it makes me think I have been a little harsh, the album strengthens and displays some reasonable song writing chops from the duo.

No Place Like You continues this goodwill, it’s definitely an album of two halves, from very ordinary, almost dull to an album that makes me want to relisten and with that we come to the final track, the excellent Downside Of Growing Up. 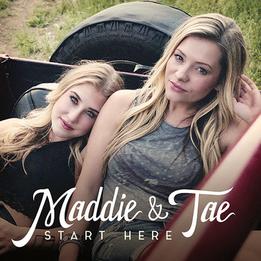 2. Girl In A Country Song

7. Your Side of Town

10. After The Storm Blows Through

11. Downside of Growing Up

Overall
It’s a real headscratcher Start Here, it’s a great EP, it is however a mediocre album that takes too long to get started, its clichéd in parts, and then wondrous in others. It’s trying to be different but its need to chart makes it a little too self-aware. I hope that with their second album, they have the confidence to do their own thing and take more risks. Unfortunately those risks are not being taken on this debut release.

Sierra, Fly, Downside of Growing Up